The music program of the Dubrovnik Summer Festival will continue with a unique concert that will be held under the title Guitarrismo on Thursday, August 16th, at 9.30 pm in the atrium of the Rector’s Palace. Eight excellent guitarists will share the stage: Zoran Dukić, Petrit Çeku, Morana Pešutić, Tomislav Vukšić, Tvrtko Sarić, Krešimir Bedek, Pedro Ribeiro Rodrigues and Maroje Brčić. With the selection of the best compositions and arrangements for different guitar compositions, the concert also features the premiere of Goran Tudor’s piece for eight guitars - Bašamar.

A unique concert experience brings a rich and special program prepared for this occasion. The festival audience will have a chance to hear Concerto for Four Violins and Strings in B minor by Antonio Vivaldi, originally composed for four solo violins and cello, arranged by Petrit Çeku for eight guitars. The program will also feature the music from the ballet El Sombrero de Tres Picos byManuel de Falla which was revolutionary by introducing the techniques of Spanish dances for the first time on the ballet stage. Because of this, most of the music is made up of dances such as farucca, fandango and seguidillas. The work consists of three passages that Darko Petrinjak arranged for the trio of guitars. The concert program will also feature the famous composer Astor Piazzolla; Invierno Porteño will be played - the last installment of Piazzoli's most famous concert, a monumental greeting to Vivaldi called the Four Seasons of Buenos Aires. The arrangement of the violin and orchestra concert by the great Latvian violinist Gidon Kremer is well-known and the audience had an opportunity to listen to it at the Dubrovnik Summer Festival 2013, while the program of this concert includes Krešimir Bedek's arrangement for four guitars. The program also includes the work of the jurist and composer Ivo Josipović Drmeš for Penderecki and eight guitars. 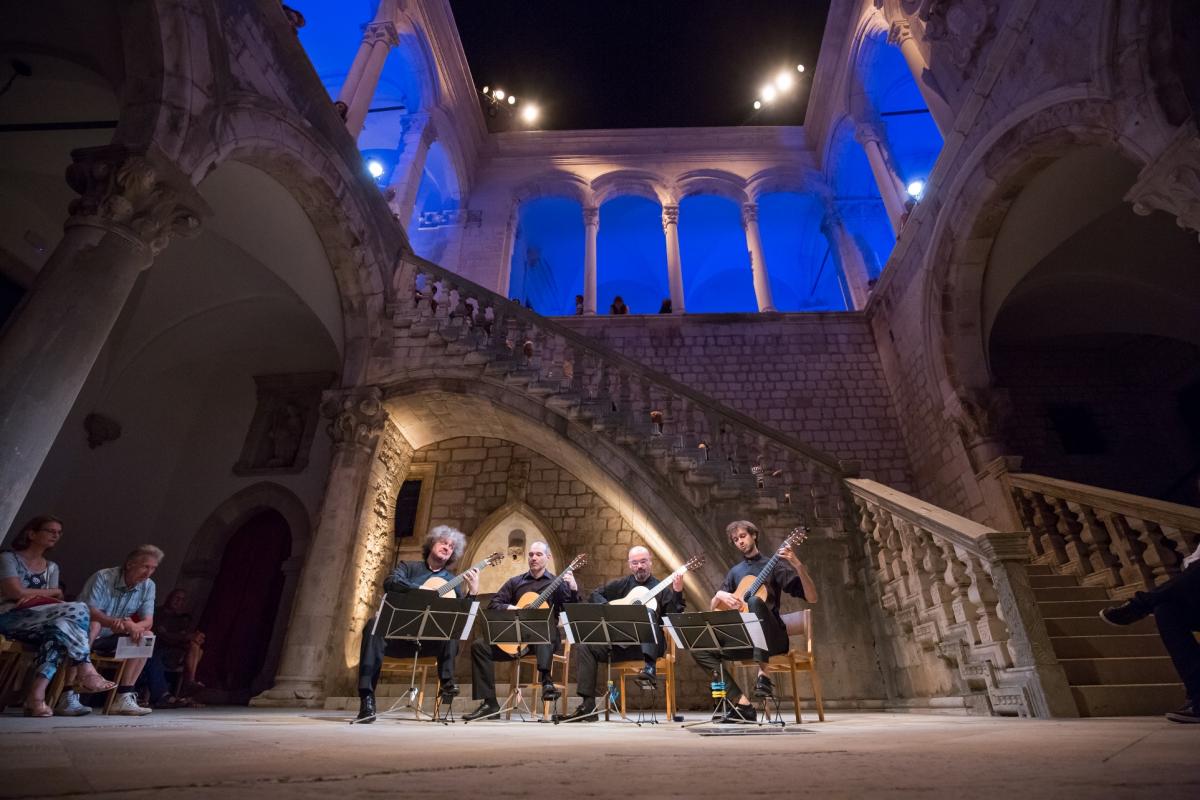 The concert also includes the premiere of the work of Goran Tudor, created for this year's Dubrovnik Summer Festival, which is a single-song arrangement for eight guitars in the 12/8 degree, entitled Bašamar. The song was written this spring, and it is devoted to Tudor's colleagues, guitarists who will have the honor to perform it first. It is written specifically for the space of the Rector's Palace. According to the composer: "Bašamar is an archaic Dubrovnik word for the shoal of fish, and it corresponds to me by meaning and sound as well as to the fact that the etymological expression is not easy to interpret just as it is not always clear in the composition what is the origin of its motifs, and rhythm. " The Afro-Brazilian rhythms and melodies have been carefully absorbed in most of Paulo Bellinati's work, as well as Jongo, which will be performed at this concert. After the original version for the two guitars, the piece was followed by numerous changes by the author himself, including the jazz ensemble and orchestra, guitar and orchestra and solo guitar. For the latter version, composed in 1982, Bellinati won the first prize in 1988 at the eighth Carrefour Mondial de Guitare in Martinique. At the program of the concert, there is also the fourth installment of Fandango, from the Quintet for Guitar and Strings by Luigi Boccherini, arranged by British guitarist Jeremy Spark, which is a part of the standard guitarist quartet repertoire and also of this concert.

The tickets for the unique concert Guitarrismo are available online and at the Box Office in the Festival Palace (Od Sigurate 1), every day from 9 am to 9.30 pm, as well as on the location two hours before the start of the performance.