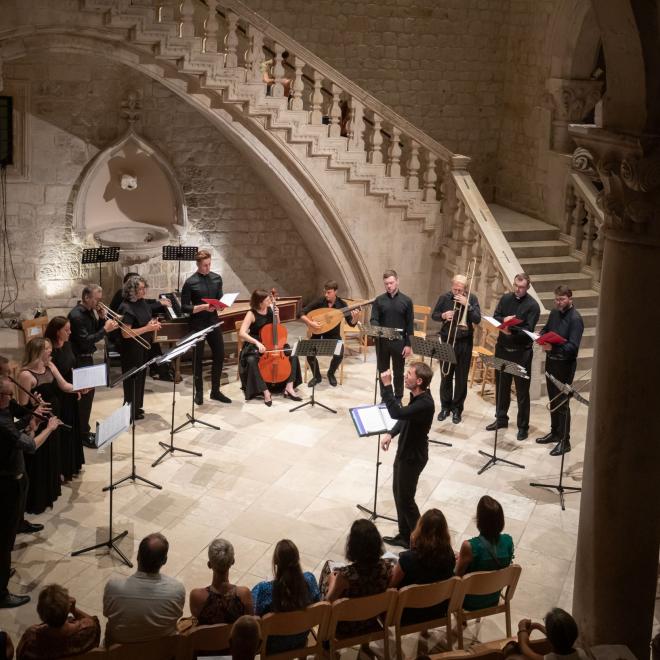 The ante-earthquake Baroque splendour of the City will be sung by the Antiphonus who have, since their formation in 2008, been performing regularly at major Croatian and international festivals and alongside renowned soloists, always giving their best for their audiences and their enjoyment. Nourishing the sound that aims at a melange between the tradition of a full bodied eastern European vocals and the western balance and purity, Antiphonus are building a wide-range repertoire from the plainchant to the recently written, cross-over, or commissioned works. Paying special attention to the Croatian contemporary music, they premiered pieces of the foremost Croatian authors, but also gave the first contemporary performances of the newly emerged works from the dusty libraries. Antiphonus have, meanwhile, been making recordings frequently for the Croatian Radio and Television, as well as collecting nominations and awards. Their two annual concert series in Zagreb, The Triads, featuring chamber vocal music, madrigals and baroque opera, and Trinitas that presents sacred a cappella and oratorio concerts are one of their crowning achievements, always receiving high praises and inspiring audiences. The uniqueness of the ensemble is the fact that it performs its repertoire in a chamber style, even when it comes to complex vocal-instrumental pieces. In the Rector's Palace Atrium they will performe with members of the Concerto dei venti ensemble, whose early baroque wind instruments, cornets and trombones are perfectly harmonized with the human voice and who 'take the human voice as a model', as Silvestro Ganassi's text describes the interpretation of music from the 16th and 17th century.