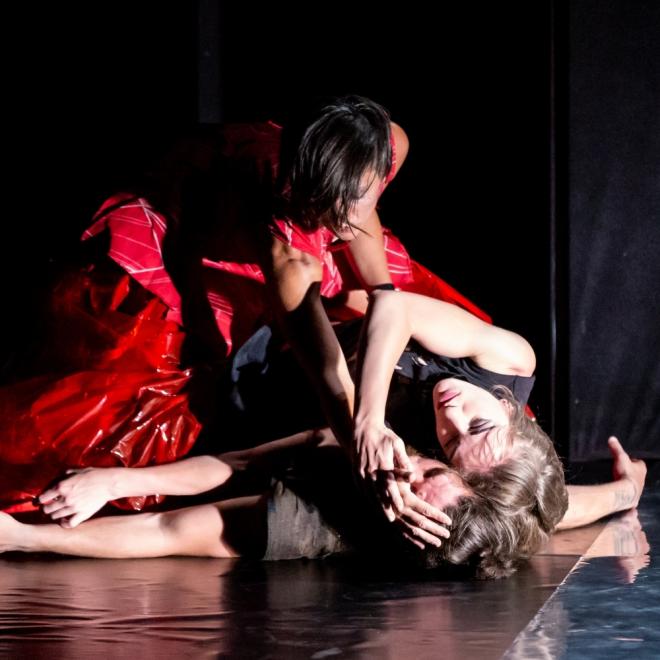 Dance performance, based on William Shakespeare’s

The choreographer of Macbeth is young Miloš Isailović, who has created many memorable dance roles with Bitef Dance Company, and has won “Dimitrije Parlić” award for his first choreography, Dunjaluk, produced by Bitef Theatre.

This dance performance, based on a classic drama concept, takes Shakespeare’s Macbeth only as a starting point for the development of the author’s image of the contemporary world, filled with the atmosphere which rules the play itself – the dark world of conspiracy, crime, psychological deviations, desire for power, passion… Contemporary choreographic interpretation of Macbeth offers various stage possibilities. The character of Lady Macbeth has always drawn a lot of attention, as well as the appearance of the three witches. Together with all the other characters, they will be visually adjusted within a timeless frame, conveying a sense of modernity, of a contemporary spirit and, above anything else, the feeling of universal value inherent to all Shakespeare’s ideas.

For me, Macbeth is a story of two people’s internal struggle; the struggle of two people with great ambitions. The whole story is permeated with female principle, determination but also manipulation. All is fair in the fight for a throne or, from the contemporary point of view, for the power and high position. In the end, the price which has to be paid is very high, the kingdom is won in bloodshed, madness and repentance. Through the story of Macbeth, Shakespeare warns us that people who strive for power at all costs are never led by good intentions and are ready for anything. He warns us that we should be careful what we wish for, because it might come true. Once on the top, we remain alone, exposed to harsh winds which bring all our dirt out in the open.