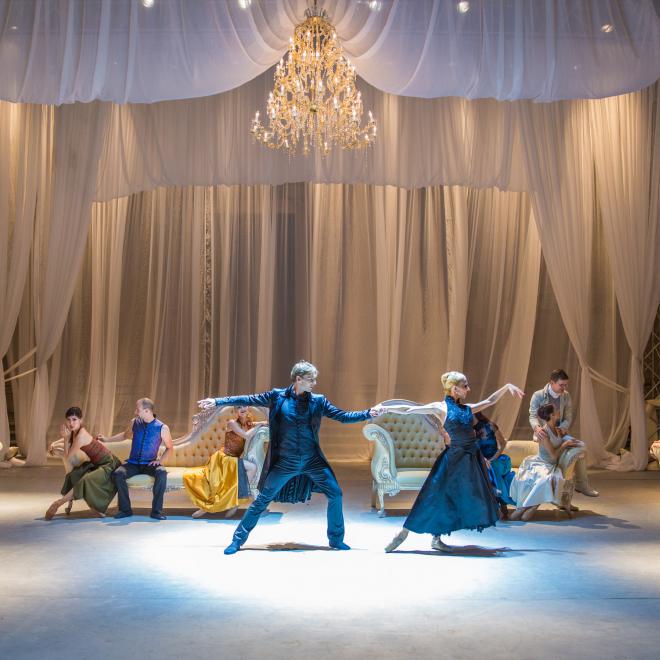 Ballet soloists and ensemble of the Slovenian National Theatre of Maribor:

The Dangerous Liaisons - a novel written in the late 18th century by the mathematician, general, editor of a Jacobean magazine and writer Pierre Choderlos de Laclos (1741–1803) – is a criticism of the then French aristocracy which relied on the monarchy and the Ancien Régime. Characterized by the spirit of Enlightenment, the novel is nowadays more destructive than Russeau’s social criticism thanks to its subversive and controversial potential. Leaving aside the vivisection of the French aristocracy and disregarding false morality, which is the core of many present-day societies, Laclos leaves a wide space for playing with that which is private and public, personal and social. On this slippery terrain where intimate and public things overlap, in the space determined only by a conditional – and very much problematical – good taste,  The Dangerous Liaisons experienced a true “renaissance”, particularly in the 20th century which saw a large number its film and theatrical remakes. Well known, for instance, is the film version based upon Christopher Hampton’s play and directed by Stephen Frears. After their acclaimed staging at the Maribor Theatre, The Dangerous Liaisons are “returning” to the ballet medium choreographed by Valentina Turcu and directed by Leo Mujić, while the dancers perform to the music of baroque masters (Georg Friedrich Handel, Johann Sebastian Bach, Antonio Vivaldi, Tomaso Antonio Vitali, etc.).