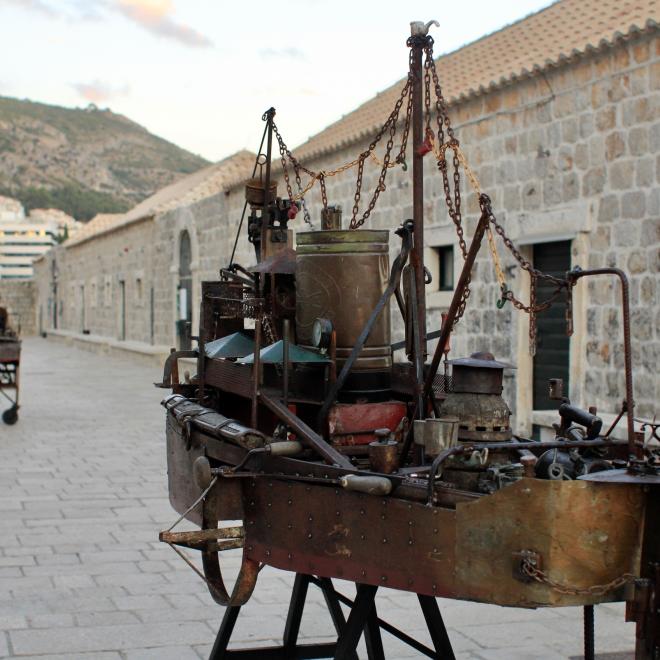 A series of ships mostly made of metal have docked at the Lazareti Plateau. Their captain is Dubrovnik-born artist Igor Hajdarhodžić. He is also the master shipbuilder because, with a couple of assistants (Puljo, Kigen, Petar…), he is the one who builds these ships. Igor located his big shipyard in Grožnjan – the Town of Artists – as witnessed by the displayed photographs by Tomislav Kovačić.

All items on display are in the form of a ship. The hulls are made of thick sheet metal as the basic elements of shape. As we move away from the whole and pay attention the details, we begin to recognise the elements these vessels are built from. Their builder was really imaginative. We have before us a travesty of ordinary, discarded objects that have been given a new purpose. The repertoire of used items is mostly metal, but also includes many other diverse components: grinding wheels, furnace parts, chimney pipes, and water pipes. A careful observer will notice parts of agricultural machinery and tools, parts of industrial machine mechanisms, bicycle parts, saws, grates, chains, pulleys, screws, drills, metal nets, toolboxes and barrel hoops. In addition to all this, the traces of punches, breaks, wear of base material, rust, dirt - all become art. Igor starts with ready-mades and the project shows conceptual results. Despite a lot of fitting in, each of these vessels looks convincing. The history and age of each element, its ethnographic value, make these works even more interesting.

Although insufficiently defined as a term, postmodernism is able to handle the situation that has sailed to the Lazareti Plateau. Like in the era of affirmation of the term, today its actors still see creativity as a setting for the avant-garde and for artistic and political utopias. The crisis of values, questioning long-established ideas, which is characteristic of postmodernism, is reflected in thought by changing and challenging the established approaches, techniques, and placement of shaped objects. The fact that Igor Hajdarhodžić does not hide the elements he uses is commendable. They are, logically, adapted to the shape/idea of a ship, but we can also recognise them as objects which previously served other purposes. And this is where the fascination begins. The artist’s imagination is truly unstoppable. The use of nearly everything and having the artist decide what will and what will not be artistic material is once again witnessed by this exhibition.

I present this exhibition as a segment of a long-term project with all the characteristics of a coherent whole. We have before us the development of thought from experienced reality to intensive shaping/reshaping and swapping of meaning/function. The artist probably finds it difficult to stop working on each individual work. The ships seem to be breathing heavily as a consequence of this intensive compiling game. But, at the last moment he manages to stop accumulating, combining, making and defines the composition at the moment when all parts become an indivisible whole. It appears that he is closing the concept, stops playing, with the fact of formative defining of symbols.

The rhythm of the civilisation and the lack of frugality of the consumerist society, the inability to absorb the surplus of comfort items such as packaging, quick discarding of fashion items, general lack of quality in relation to service life and similar situations that savage capitalism hides behind democracy are shown here in redefined aesthetics. The compositions, the objects made from discarded and then rediscovered articles offer two lines of thought: apart from the pronounced sarcasm towards industrial society, we find here a warning of the ecological neglect of our consciousness. Igor seems to want to justify discarding the superfluous by turning it into inventive compositions. The new object, created from the found item collaged into installations like these, assumes sociological nature more significant than its meaning when the item was new and in the focus of the attention of its owner.

By watching these ships in a sequence, we realize that what we have before us are the results of a ritual. As we look at the works offered, we see two things: the artist’s fascination with ships/sea and the thrill of the idea of a vibrant, fractal universe through, almost accidental, selection of travestied elements. The offer relies on what is seen: a vessel, but here we find a story with a strong synesthetic effect. The artist offers a consideration of re-evaluating things according to their shape and purpose. Bordering on experiment and with processual procedures, he opens up the space of confrontation with ephemeral reality. Our western, arrogant civilisation has always treated the relationship between the passive and active lightly. The material, tangible, visible world has been in focus for millennia, while the constant rhythm and continuous change are represented as a surplus of reality instead of active principles. The artist suspects that reality is subjective and the pursuit of knowledge must be a constant interpretation and reinterpretation.

The ship alludes to a journey, a long and slow movement across the water surface. These vessels also remind us of crises in war-torn countries that cause people to flee. In our vicinity as well, in the Mediterranean, ships transport, collect, but also leave the refugees unaided. Under the pretext of a great threat posed by the refugees, whose movement they caused themselves, smug little European countries immediately set the boundaries: metal barbed wire on the mainland and entry bans at sea. Although nation-states in the modern sense of the word have existed for barely two centuries, their institutions claim authority, spread hatred towards neighbors, attempt to be ethnically ‘clean’.

These are objects, mobile objects, objects in which, conceptually, potential movement is initiated. Their observers must decide what exactly they are experiencing as they observe these works. Whether they are experiencing an object, a detail, or an event. Igor relies on our sensibility and provides us with a position of an active observer. We are encouraged to imagine/think/travel, while the artist offers us transport. It is up to us to accept the offered clue. In our minds, we can sail away on one of these ships. Our perception is enriched with one visual and cognitive experience.

Igor Hajdarhodžić was born in Dubrovnik in 1960. He holds a degree in Acting from the Zagreb Academy of Dramatic Art. Besides acting, he is involved in music, media production and visual design of maritime-related objects. He has been occasionally present in Istria for years now. He has been active in Grožnjan since 2018.

On display until 25 August