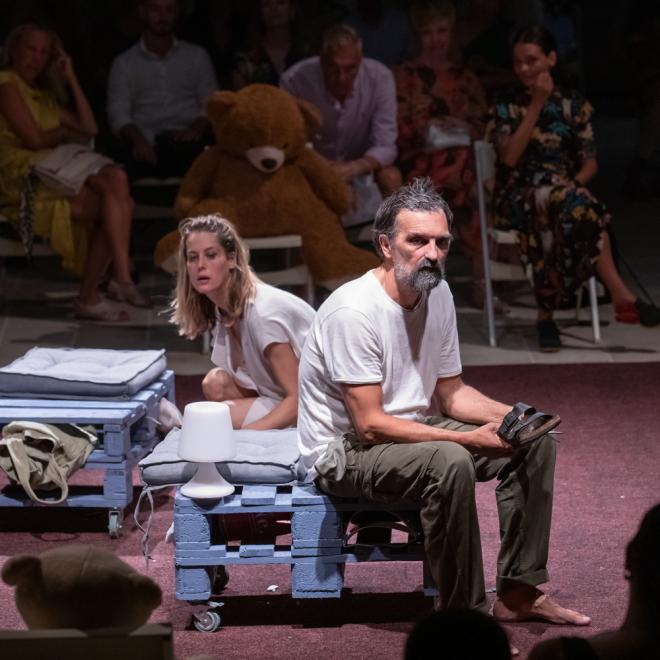 The play Intimacy deals with the most pressing issue of today – the new virus. It explores what changed in our lives, our work and attitude towards ‘the other’ and ourselves. Through a series of short stories about distance, discipline, privacy and new relationships formed in the periods of (self-)isolation, actors Leon Lučev and Jelena Graovac are trying to examine whether it is possible to preserve intimacy in the age of the pandemic.

Andrej Nosov is a director, producer and an activist. He deals with the subjects of social and political responsibility and promotion and defence of human and minority rights. He earned his Master’s degree from the Belgrade Faculty of Dramatic Arts, Theatre and Radio Directing Department. He has directed more than ten productions in Serbia and the neighbouring countries, including Black Box, Ghosts, Remains, Werther: You Either Have Hope or You Don't, Bent, Kiddo and Uncle Vanya. He is the founder of the Youth Initiative for Human Rights and the Heartefact Fund. During the last 15 years, he has worked on over a 100 projects in the NGO, art and education sector.

Biljana Srbljanović is one of the region’s most acclaimed playwrights, whose award-winning plays have been staged and translated worldwide. She is the author of more than ten plays, including The Belgrade Trilogy, Family Stories, Locusts, Death is not a Bicycle, This Grave is Too Small for Me and The Glass Neck. She has won the following awards: Premio Europa - New Theatre Realities, six Sterija Awards for Best National Contemporary Play, Slobodan Selenić Award, Ernst Toller Award, Winning Freedom Award, City of Belgrade Award for Theatre and the French medal of the Knight of the Order of Arts and Letters. She was a Fulbright Scholarship holder and currently she is a Full Professor at the Faculty of Dramatic Arts in Belgrade and doctoral candidate in Film Studies. As an eminent humanist and philanthropist, with her (theatrical) work Biljana Srbljanović successfully draws attention to numerous problems of contemporary society.

Part of Future Epics project, co-founded by the Creative Europe Programme of the European Union