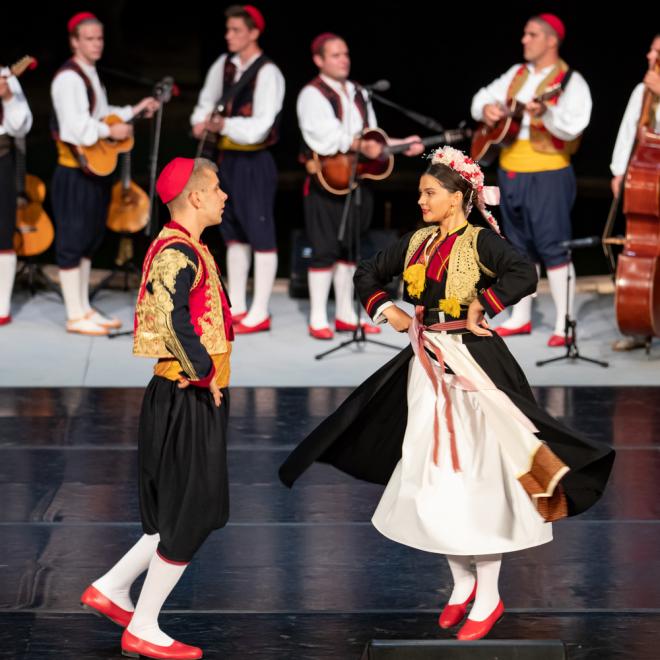 Established in Dubrovnik in 1964, the Linđo Folklore Ensemble is a cultural institution under the auspices of the City of Dubrovnik. It was named after the favourite and best known folk dance in the areas of Dubrovačko Primorje, Župa and Konavle. In addition to the Festival of St Blaise, the Dubrovnik dialect, the art of Konavle embroidery, the klapa singing, the Silent Circle Dance of Dalmatinska Zagora, the Bećarac dance, the Međimurska Popevka folk songs of Croatia, and many other Croatian cultural assets, the Linđo circle dance is included in the UNESCO Intangible Cultural Heritage List. The Linđo Folklore Ensemble pays special attention to these traditional culture phenomena as specific symbols of identity, thus fulfilling its goal: the collecting, artistic interpretation and performance of the finest examples of Croatia's rich music and dance heritage. In each of these segments, the ensemble makes every effort to remain as faithful as possible to the authentic folk expression. It is particularly devoted to the klapa multipart singing, the nowadays most widespread form of traditional singing in the south of Croatia, and it's littoral and island regions. In December 2012, UNESCO included the klapa singing in its Intangible Cultural Heritage List.

The Linđo Folklore Ensemble has won a large number of accolades and awards. From 1967, it has performed on a regular basis at the Dubrovnik Summer Festival. Appearing extensively at home and abroad, the ensemble has been a successful promoter of Dubrovnik and Croatia.

1. KONAVLE – a selection from the wedding customs with potkolo dance

More about the programme here