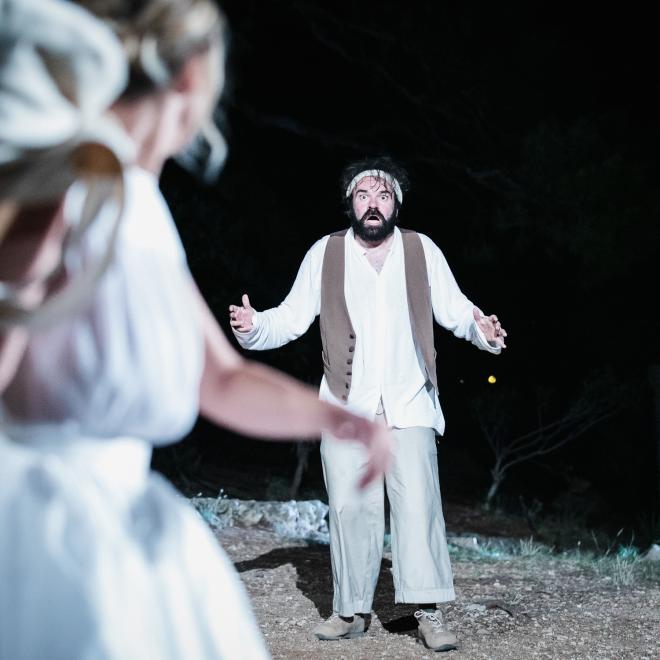 Dubrovnik Summer Festival in co-production with the Academy of Dramatic Art, University of Zagreb (as part of the EU project Future Epics)

Marin Držić’s comedy Grižula only partially belongs to the pastoral tradition, primarily because of a group of mythological characters and plot in one segment of the story. However, what Držić started in Tirena – the introduction of sharp-witted Dubrovnik Vlachs into the world of Arcadia – became a rule in Grižula. The directing concept activates the space of Grižula as a space of captivity, it does not provide shelter to those who seek harmony, purity and beauty, but becomes a space of uneasiness and caution – the fairies fear Cupid, Plakir fears the fairies, Gruba fears that she will lose Dragić here, Dragić loses himself in this space and, by escaping one evil, Omakala encounters another, while Grižula is mocked and enslaved.

The interplay between the enamoured couples is especially important for Grižula, resembling the one in A Midusmmer Night’s Dream. Throughout this interplay of couples in love who search for each other in an enchanted circle, which we find both in May festivities and comedies, Držić introduces an idea which he conveys to his audience as a moral lesson and a warning: when ordinary people cross boundaries set for them as human beings and encounter the supernatural fairy world, they become comical and victims of restlessness and misunderstanding. By combining conventional motifs typical of mythological-allegorical drama, by stripping the Vlach characters of caricatured features and crude humour, by individualising them, involving them in the dramatic plot with the theme from real-life Dubrovnik, by assuming a critical stance towards it, Držić equipped Grižula with meanings lacking from the works of similar type. By parodying the theme of an idyllic world in which noble shepherds are eternally searching for fairies, through three seemingly secondary, ‘non-fairy’ strands of the plot he shaped the idea of disharmony between what is desired and what is possible, between the ideal and reality, between what we want and what we can get, thus showing that happiness is not found in the imaginary Arcadian world and the search for the ‘fairy’ (the desired value), but in the reality, we live in. Therefore the contemporary relevance of Grižula does not lie in the allegoric glorification of marriage, but in the story about love that is not to be sought beyond what is known and available to us. This new reading of the eternal human search for love by Saša Božić and Petra Hrašćanec is a study of the local mentality intertwined with motifs from Dubrovnik folk songs and dances.

The specificity of the project is the participation of the final year students of Acting from the Zagreb Academy of Dramatic Art alongside renowned Croatian theatre actors. They will go through the process of attending workshops and auditions and, through their work with actors and directors, learn the language of Držić’s works and be introduced to the general context of older Dubrovnik literature.

Držić, Marin (called Vidra, ‘Otter’) was a Croatian poet, dramatist, political author and actor (Dubrovnik, 1508 – Venice, 1567). His literary output reveals extensive knowledge of contemporary Italian as well as ancient Roman theatre. Držić thoroughly studied the poetics of the comedies by Plautus and Terence while he was in Siena, which significantly influenced his most relevant prose comedies. He was also familiar with the majority of the authors of erudite comedy of his time, especially L. Ariosto, who was his role model among his contemporaries. In Siena, he witnessed pastoral-mythological plays and this genre, not so well-known elsewhere, directly influenced his pastorals. He was especially close to the Venetian polygraph and author of popular tragedies L. Dolce, whose opus inspired his tragedy of Hecuba. Among his domestic predecessors, Držić was well acquainted with a somewhat earlier dramatic output of N. Nalješković and he was definitely familiar with M. Vetranović’s plays. The experience of these authors is built into his plays, which significantly surpassed everything that was written before him within the drama genre in Croatian language. Although inspired by Renaissance theatrical experience, he introduced the restlessness of Mannerism in everything he wrote. Under the disguise of seemingly bright comedies, Držić is in fact the author of very restless works, the most significant author of Croatian Mannerism. His tragedy Hecuba is not his only work that belongs to this literary period; restlessness, internal excitement, and discontent mark all his works, even comedies, and pastoral plays. He belonged to a generation of authors who did not have the optimism of their predecessors, a generation of tired people who realised that not a single one of the proclaimed ideals of the Renaissance was reached. This emotion marks his opus and endows it with particular gravity. His talent remained unrecognised in his own town, which is why he did not feel comfortable at home. He was a kind of an outcast, a man who wished to transpose his international experience to his native environment. His innovativeness remained unrecognised during his lifetime and he was gradually discovered by future generations. His works were reprinted on several occasions in the 17th century, but before the second half of the 19th century, his output was unknown even to scholars. Although The Farce of Stanac was staged at the Croatian National Theatre in Zagreb at the end of the 19th century, Držić’s modern stage voice was recognised only after the first adaptations by M. Fotez, who staged Uncle Maroje in Zagreb in 1938. In the following decades, all his dramas were staged, his works were translated into many languages and he was also staged abroad. Reworked at first, today Držić’s plays are performed with a high degree of authenticity. Their best performances took place in Dubrovnik’s open-air stages.

Saša Božić is a Croatian theatre director and dramaturge present in the field of European contemporary dance. His works rarely fit neatly into the category of choreography or directing. His distinctive combination of movement materials, visual imagery and texts follow the transformations between his multidisciplinary roles as a choreographer, director, and dramaturge. Recently his projects were presented and premiered at the Theatre ITD in Zagreb, Croatian National Theatre in Zagreb, Zagreb Youth Theatre, Dubrovnik Summer Festival, Split Summer Festival and Gavella City Drama Theatre in Croatia, as well as at the Kaaitheatre (Belgium), Hebbel am Ufer (Germany) , Pact Zollverein (Germany) and Gessnerallee (Switzerland). Since 2008, he has been the director of an independent arts organisation de facto. He works as an assistant professor at the Academy of Dramatic Art, University of Zagreb.

Petra Hrašćanec is active in the field of performing arts as a dancer, choreographer and pedagogue. Her primary field of interest and education is contemporary dance, whereas her works are characterised by exploration of the body as the reality of performance through different media. Apart from performing her own works, she also performs as an associate member of choreographer Francesco Scavetta’s Wee Company based in Norway. As a choreographer, she creates as a member of the 21:21 arts organisation (as one of the artistic directors) and partner organisation de facto in collaboration with Croatian institutions (Theatre &TD, Zagreb Youth Theatre, Pogon Jedinstvo, Zagreb Dance Centre). Since 2013, she has served as a lecturer and a mentor leading the Contemporary Dance Technique programme at the Department of Dance of the Academy of Dramatic Art, University of Zagreb. She is the artistic director of the Monoplay Festival in Zadar since 2009.

The works of Petra Hrašćanec and Saša Božić have been presented at the renowned European dance festivals and theatres, including the Rencontres Choreographiques Internationales de Seine-Saint-Denis in Paris, Impulstanz in Vienna, UOVO Festival in Milan, La Jette Dance Centre in Brussels, Les Subsistances in Lyon, Theatre de la Bastille in Paris and others.