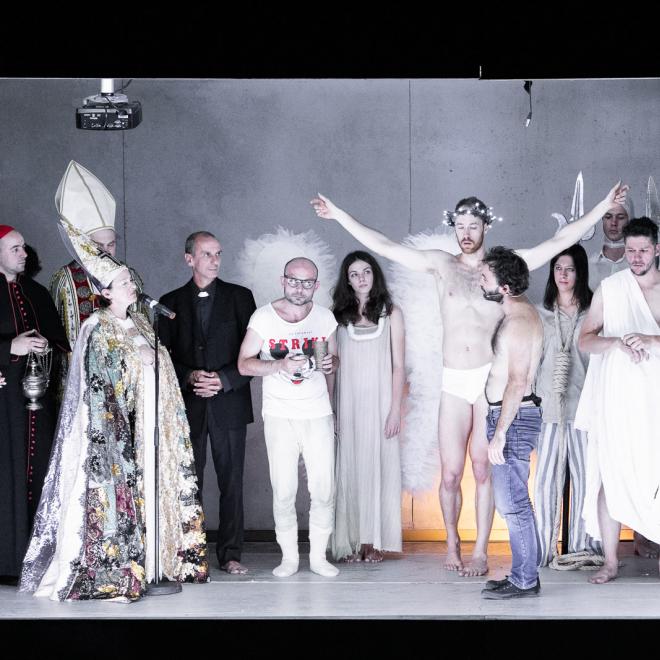 Boat transfer to the Island of Lokrum is included in the entrance ticket price. Boats from the Old City Port depart at 8.30 and 8.45 pm.

Notice: Strobe lights are used during the performance

Michelangelo Buonarroti is a play from Miroslav Krleža's Legend cycle written in 1918. Inspired by the poetics of Expressionism and filled with powerful images and meanings, it leads us to the realms of lucid dreams. The play was first published in 1919 and dedicated to Ljubo Babić. Krleža was revising the text of this one-act play by 1933, when its final version was released. The theme of the play focuses on the temptations and tragic life of Michelangelo Buonarroti, who – inspired by great ideas and torn by his own quests – remains lonely and in conflict with his immediate social environment. Exploring the abysses of creative act, Krleža takes us to the Sistine Chapel, where Michelangelo Buonarroti is at work on the Day of Wrath on a May morning. Krleža sees Michelangelo as a genius constantly in conflict with Others, personified in the image of the Unknown. Almost like Nietzsche’s Superhuman, this brilliant painter tries to achieve the unlimited power of artistic creation, but Krleža makes him face money, a miserable wage for his great art. In this way, he raises the eternal but always actual question on the relation between art and money, and thus on art, power and politics, which is today perhaps more important than ever casting doubt on the declarative slogan about artistic freedom without which art becomes merely an administrative kitsch, losing its true criticising power and resoluteness.