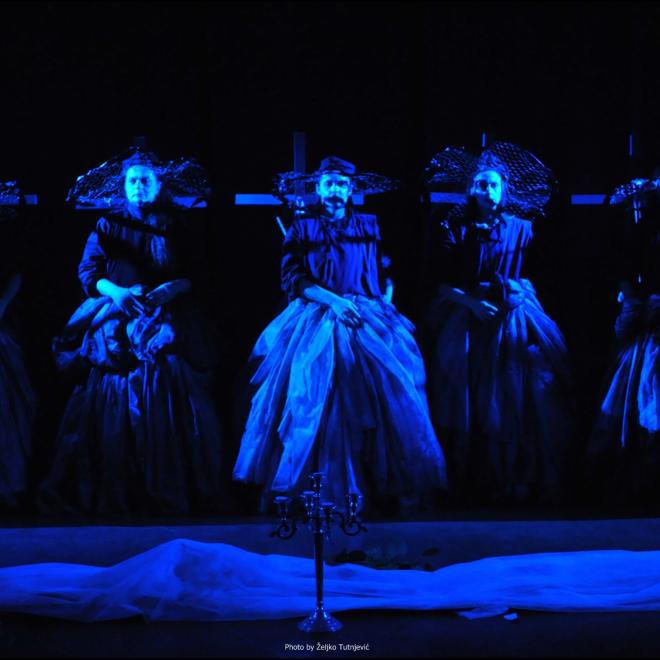 First performance held on 22nd December 2013 at Lazaretto in Dubrovnik

Obscuration is the first staging of a Ruđer Bošković text and of Anica Bošković poems and mystery plays at the Croatian theatre. It is Lero’s another attempt to explore the Dubrovnik literary and theatrical heritage, and to recognise both intimate and unknown presentiments of the residents of the City which begot its great sons and praiseworthy daughters. In Lero’s theatrical glossary and repertoire, Anica and Ruđer Bošković continue the sequence that began with the stagings of the texts by brother and sister Gjena and Ivo Vojnović, i.e., by Držić, Kaznačić, Kazali, Pucić and, eventually, the Dubrovnik modern authors Šehović, Mojaš, Paljetak and Milišić. Obscuration is a play about Dubrovnik from both bygone and our own recollections, but also about Dubrovnik's present-day changes wherein it still manages to preserve its uniqueness. It is also a play about the City which slowly disappears, and about its image which Lero wishes to save from oblivion and offer to theatre as a token of appreciation to the ambiance which begot it.

„...Or, when Dawn lifts her rosy head from the waves

Early in the morning, sprinkling flowers with the first light.

You can still see the stars glittering in the dusky space,

But only those that illuminate more brightly

(R. Bošković Eclipse of the Sun and the Moon)