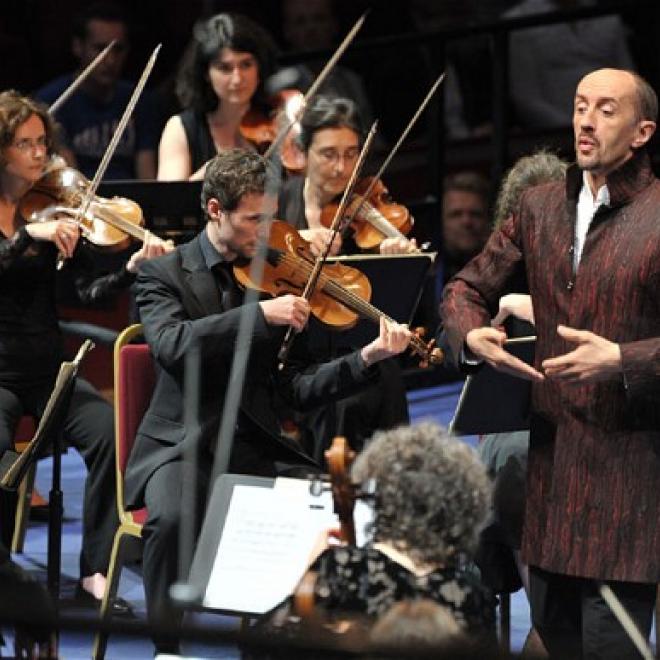 Strengthened by his thorough training as a harpsichordist, organist, pianist, vocalist, composer, choral conductor and orchestral conductor, Hervé Niquet approaches musicianship as would a true researcher, preferring to go back to the original source in order to avoid convention and habit.

In this spirit, he created Le Concert Spirituel in 1987 with the goal of reviving the French grand motet. Twenty-five years later, the ensemble has made a name for itself as one of the seminal groups for the interpretation of Baroque music.

As one of the most fervent defender of the French repertory - from the Baroque era to the beginning of the XXth century - Hervé Niquet also leads several prestigious orchestras as a guest conductor, including the Akademie für Alte Music Berlin, Sinfonia Varsovia, Orchestre Philharmonique de Radio France, RIAS Kammerchor, Orchestra of Picardie, National Orchestra of Montpellier, Kammerorchester Basel.

His pioneering rediscoveries of works from this period led him to help create the Centre de musique romantique française à Venise in 2009, with which he engages in many different projects. This collaboration has led to the creation of a series of compact discs on the subject of the Academy of Rome Prize music, with recordings of unpublished or unknown works: three double discs of previously unreleased pieces by Debussy, Saint-Saëns, Charpentier and Max d’Ollone conducted by Hervé Niquet.

Hervé Niquet also involves himself in pedagogical projects for young musicians (such as the Schola Cantorum Basiliensis, the Academy of Ambronay, the Atlantic Youth Orchestra, the Opéra Junior of Montpellier, the McGill University of Montréal or numerous master-classes and lectures).

This season Hervé Niquet is conductor in residence at the Palais des Beaux-Arts (BOZAR) in Bruxelles. Concerts include Striggio’s Mass 40 voices and Rameau’s Les Fêtes de l’Hymen et de l’Amour with Le Concert Spirituel and Canteloube’s Chants d’Auvergne with Anne Sophie von Otter. Hervé Niquet also shares a special relationship with the Vlaams Radio Choir, as its musical director, and with the Brussels Philharmonic, as first guest conductor, both functions carried out since the fall 2011. Among other pieces, he conducts both the choir and the orchestra in performances of works by Mendelssohn, Canteloube or Félicien David, among others.

Hervé Niquet has been decorated by the State with the honor of Chevalier de l’Ordre National du Mérite (Knight of the National Order of Merit) and Officier des Arts et Lettres (Officer of Arts and Letters).