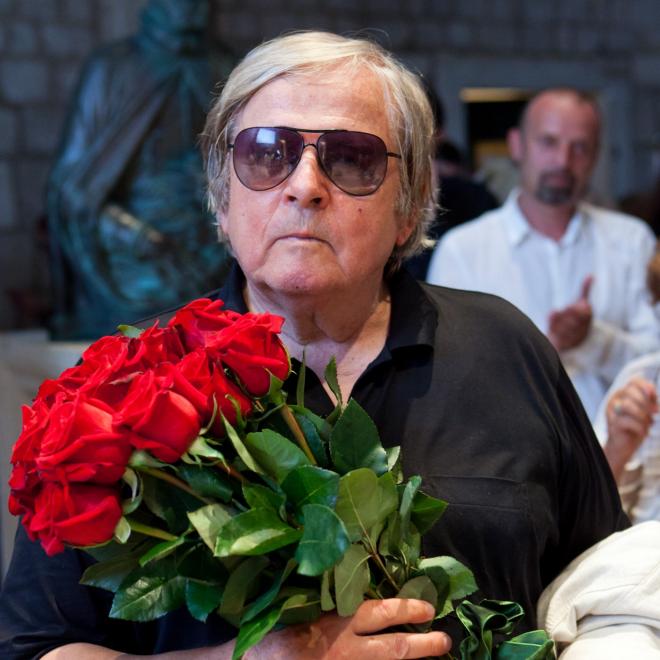 Theatre director Joško Juvančić (1936) was born in Dubrovnik. Having attended the primary and secondary school in his native town, he graduated in literature from the Zagreb Faculty of Arts and in direction from the Zagreb Faculty of Theatre Art. Immediately after graduation he was engaged as assistant first to Gavella and later to Spaić, which would greatly influence his future of a theatre pedagogue. A professor of acting since 1960, Joško Juvančić had a major influence on the artistic development of numerous nowadays famous and distinguished Croatian actors. He started to direct at the Dubrovnik Theatre (Dubrovački škerac by Feđa Šehović in 1961 and Molière’s The School for Wives), to which he would later pay many return visits in order to direct, among others, the works by Držić, Schisgal, Betti, Obaldi, Euripides, Ostrovsky, De Filippo, Vojnović and Goldoni. He attracted the attention of Croatian public in the mid 60s, directing several major and inspiring plays in Zagreb – from Schisgal’s The Typist and The Tiger at the &TD Theatre, Toller’s Hinkemann and Ghelderode’s School for Buffoonsand Escurial at the Gavella Theatre, to Goldoni’s The War at the Croatian National Theatre. He has since staged a huge number of performances both by Croatian and foreign playwrights in almost all major theatres in Croatia with a great success (particularly significant are his directions of Držić’s Plakir or Grižula and Uncle Maroje, Shakespeare’s A Midsummer Night’s Dream, Vojnović’s A Trilogy of Dubrovnik, Vetranović’s And So the Brethren Sold Joseph Away and the church performance of Ecce Homo at the Dubrovnik Summer Festival) as well as the plays by modern authors (Bakarić, Brešan, Ionesco, Simone, Cooney) with some of them – such as Tom Stoppard’s Rosencrantz and Guildenstern Are Dead at the &TD Theatre in Zagreb (1971) – becoming a theatre emblem of their time.

Among his varied theatre experiences are numerous directions of plays for children and the puppet theatre performances both for children and grownups (Skup, Osman and A Midsummer Night’s Dream). A special chapter in his biography is reserved for the Dubrovnik Summer Festival, where he has constantly been engaged for twenty years, taking the post of its artistic director in 1986. Joško Juvančić has received numerous awards and recognitions including the Nazor Award, the Dubravko Dujšin Award and several awards by the Croatian Actor’s Association.