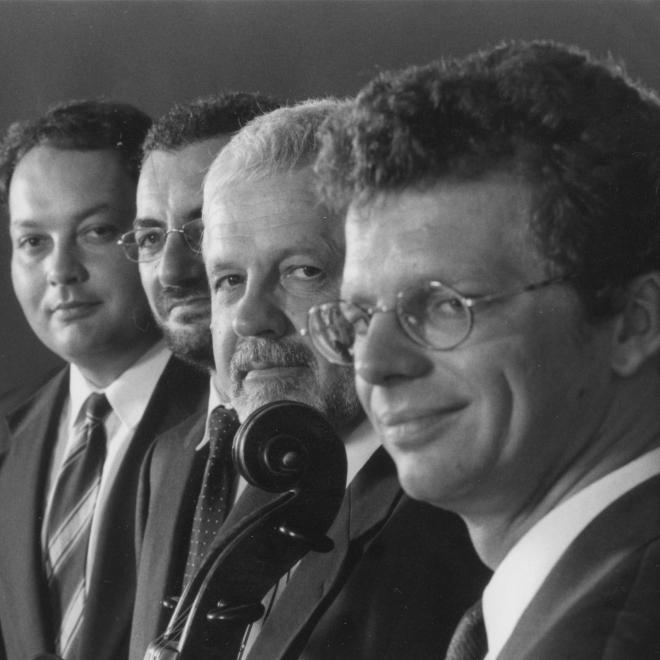 The Tartini String Quartet was founded in 1983 within the society of the same name. In addition to its extensive performances in Slovenia, the Quartet has also appeared in Croatia, Serbia, Montenegro, Austria, Germany, Italy, Spain, Switzerland, Sweden and South America, working with the renowned musicians such as Irena Grafenauer, Mate Bekavac, Maria Graf, Bruno Giuranna, Aleksandar Madžar, Franco Gulli, Enrica Cavallo, Konstantin Bogino, Radovan Vlatković and Lovro Pogorelić. The Quartet’s extensive repertoire includes compositions of all style époques, from Baroque to the 20th Century music. When Slovenia joined the European Union, the Tartini Quartet was declared a Slovenian representative and performed in that role within the Europamusicale programme in Madrid, Berlin, Leipzig, Wiesbaden and Munich. From the Konzerthause in Berlin the German Radio broadcast this concert live for the European Radio Union. Bound to their discographer Stradivarius from Milan, the quartet members have released a CD with Ernest Chausson’s Concerto for Violin, Piano and String Quartet with the famous violinist Franco Gulli and the pianist Enrica Cavallo, and the unfinished String Quartet by the same composer. The CD was well received by the professional magazines Amadeus (Milan), The Strad (London) and the Classical Voice review. With David Formissan, the principal flutist of La Scalla, the Quartet has recorded the complete Mozart’s Quartets (K. 285, 285a, 285b and 298) and his String Quartet in G major, K. 378. Its discography also comprises the works by Ravel, Dvořák and Schubert (Death and the Maiden), and a series of string quartets by the Slovenian composers.

Miran Kolbl studied the violin with the renowned pedagogue Igor Ozim in Germany and chamber music with the members of the distinguished Amadeus Quartet. The concertmaster of the Slovenian Philharmonic, he has won two Prešern Foundation Awards for chamber and solo music (1999 and 2000).

The violinist Romeo Drucker studied with Dejan Bravničar at the Ljubljana Academy of Music and later with Grigory Zhislin. From 2004 he has served as concertmaster of the Opera Orchestra of the Ivan von Zajc Croatian National Theatre of Rijeka and the Rijeka Philharmonic. The winner of many awards, he has been a member of the Tartini Quartet since its foundation.

The winner of numerous awards, violist Aleksandar Milošev is a distinguished soloist both at home and abroad, renowned for his virtuoso technique and subtle musicality. He has been engaged as a solo violist of the Slovenian Philharmonic Orchestra and as a senior lecturer at the Zagreb Academy of Music.

The cellist Miloš Mlejnik studied with Siegfried Palmo in Cologne and later with the famed André Navarra. An internationally renowned soloist and winner of numerous prestigious awards, he has worked as a music pedagogue at home and abroad. He has been a member of the Tartini Quartet since its foundation.