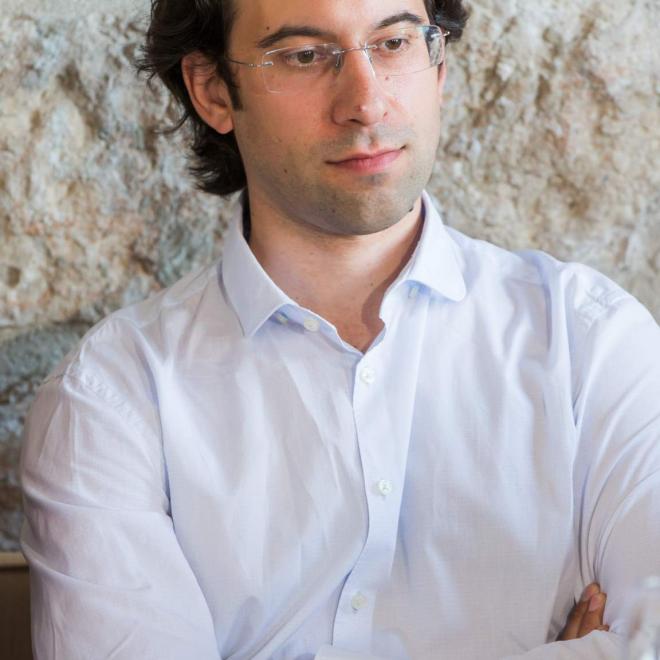 completed his piano studies at the Ljubljana Academy of Music in 2002, as the last grandaunt of Professor Aci Bertoncelj, and pursued his postgraduate piano studies at the Bern University of Arts with Professor Aleksandar Madžar. In September 2012, he graduated in conducting under Professor Milivoj Šurbek with the première and nine performances of the Ballet Evening Stravinsky (Les Noces, Pulcinella, Apollon Musagete), a production of the Opera and Ballet of the Slovene National Theatre in Ljubljana. During his postgraduate studies in Switzerland, he also studied conducting under Professor Dominique Roggen, and conducted several Swiss orchestras, such as the Uni Orchestra Bern, the Spiez Chamber Orchestra, the Orchestra of the Bern University of Arts, etc. May 2005 marked the year of his first recording as a conductor – he recorded the children's opera Schneewyttli by Rolando Zoss, for which he award later on. In the season 2006/2007, he worked as a répétiteur at the Opera of the Slovene National Theatre of Maribor. Since March 2009, when he conducted a concert within the Slovenian Music Days, he has been a regular at the Slovene Philharmonic, which he conducted on several occasions. He was engaged by the Opera and Ballet of the Slovene National Theatre of Ljubljana from October 2007 - December 2012.During that period, he worked as a répétiteur in all opera productions and as an assistant conductor at several performances. In the last couple of years, he has been working closely with the RTV Slovenia Symphony Orchestra, where he was also engaged in the season 2012/2013. He has conducted a concert for the Jeunesse Musicale Ljubljana, Christmas Concerts 2010 and 2012, a concert for the Europe Day in May 2012, a Gala New Year's Concert in December 2012, a Film Music Concert in November 2013, and many others. In February 2013, he conducted the concert Night of the Pianos, which saw the performance of five piano concerts in one evening. He performed with the same orchestra the works of Felix Mendelssohn Bartholdy in a concert within the Mozartine concert series. Simon Krečič is also known as a conductor of contemporary music. He has conducted several concerts at the Slowind Festival in Slovenia and abroad (Paris, Riga). Krečič has performed numerous works of the major Slovene (Nina Šenk, Uroš Rojko) and foreign (Elliott Carter) contemporary music composers, and has worked with renowned international soloists (Robert Aitken …). In February 2011, he was engages as an assistant conductor in a production of Massenet's Werther at the Royal Opera House in Madrid, and in March 2013 he conducted Verdi's Macbeth at the Teatro Verdi in Pisa, Italy. Since December 2013, Simon Krečič has been Artistic Director of the Slovene National Theatre Opera of Maribor.