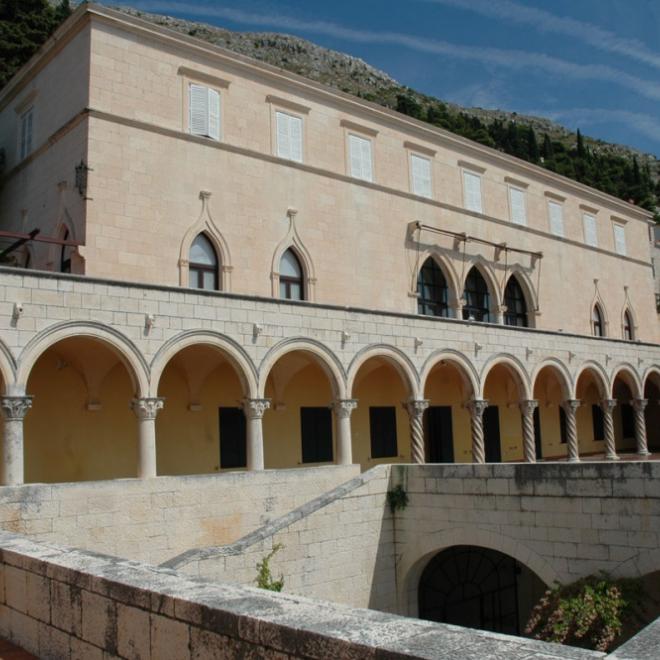 The Dubrovnik Museum of Modern and Contemporary Art was founded in 1945, when it was housed in the Cerva-Pozza Palace in the Pile area. But the building in which this museum institution of modern and contemporary art has been located since 1948 was originally conceived and constructed as the prestigious family mansion of Dubrovnik ship owner Božo Banac. It was designed by leading Croatian architects Lavoslav Horvat and Harold Bilinić so as to be close in terms of plan and style to the Gothic and Renaissance specimens of Dubrovnik town and country architecture, for example, the Rector’s Palace, the Divona Palace, the Sorgo Villa. Today the Banac mansion is a listed property.
In the terms of a 2005 contract with its founder and owner, the City of Dubrovnik, the Museum of Modern and Contemporary Art was allowed the use of additional and associated premises, the Dulčić, Masle and Pulitika Gallery at Držićeva poljana 1 in Dubrovnik and in 2008 it acquired the use of the Pulitika Studio (Atelier) in Dubrovnik’s Fort St John.

An a cultural institution founded with the intention that it should collect, study and exhibit artistic material of modern and contemporary art, the Dubrovnik Museum of Modern and Contemporary Art has to date managed to assemble, through gifts and purchases, a valuable collection of 3,000 artworks. In the collection of modern art, which covers the visual production created in the period from the end of the 19th to the beginning of the 20th century to the end of World War II, most represented are artists related in some way to the Dubrovnik region, above all those whose oeuvre has far outstripped regional and indeed national relevance. In the collection of contemporary art, covering visual art produced since World War II, along with sculpture, painting and prints, there are also collections of photographs, video works and artistic installations.