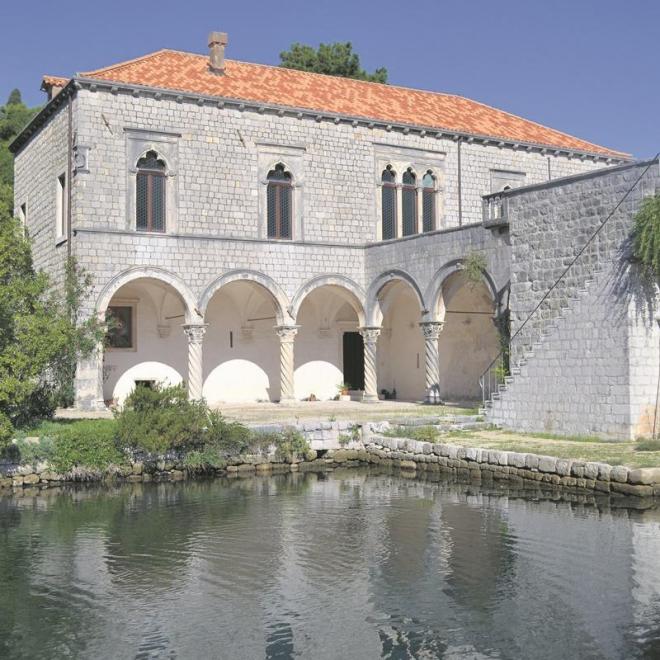 One of the most beautiful and most preserved examples of traditional Dubrovnik private architecture, overlooking Gruž and its bay is the summer villa Sorkočević in Lapad, an estate immersed in an enchanting garden and flanked by stone block walls, with a recognizable mix of Gothic and Renaissance architectural style. The villa was built in 1521 by Petar Sorkočević, a successful Dubrovnik merchant and four time city rector from an eminent Dubrovnik aristocratic line made rich by the Balkan silver-mining trade, a family whose members helped shape the Dubrovnik Republic. This is one of five Sorkočević family villas – an especially significant one because it is, besides a first-rate historical and archaeological heritage, the home of the Institute for Historical Sciences in Dubrovnik, a research unit of the esteemed Croatian Academy of Sciences and Arts since 1949. This resplendent residence, which celebrated its impressive 500 year anniversary of being built last year, includes a stone single storey house of a typical Dubrovnik layout with wood foundations, a garden with a saltwater pond and an orsan, a dock for boats, and a chapel. Carved into the halls and along the grounds of the villa is the family’s coat of arms, and even the initials of Petar Sorkočević himself. Its initial purpose was primarily as a place for rest and recreation of its noble owners and their guests, however over the course of history, its chambers hosted dances and balls, plays and literary evenings.

Evening in Honor of Milan Milišić