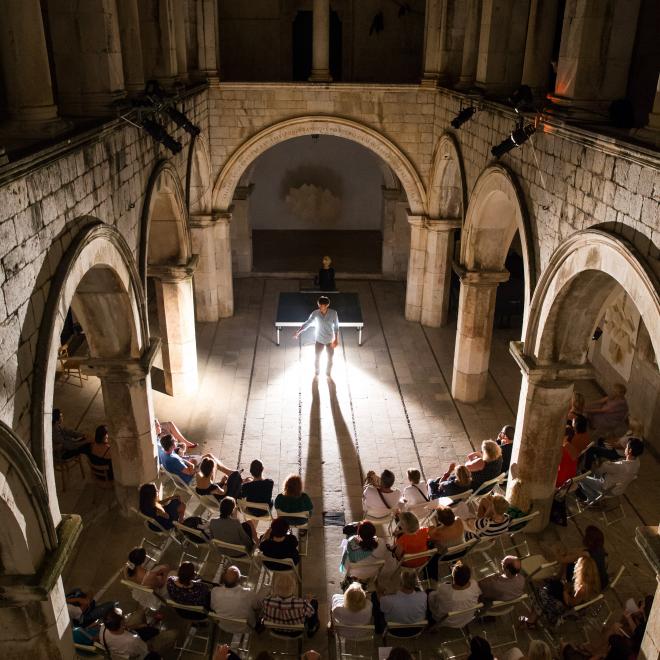 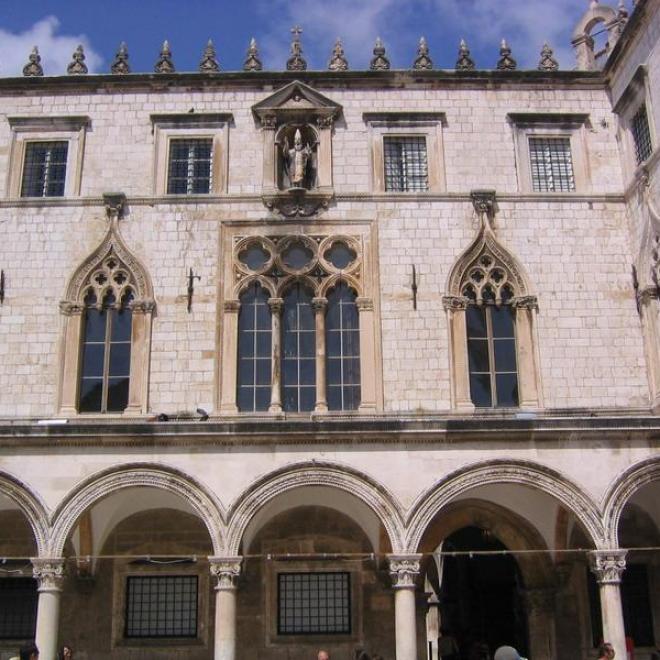 All the trading voyages of the Dubrovnik Republic entered in and flowed in through this palace, one of the most beautiful in the city. The trading spirit of Dubrovnik was known to delegate such fitting buildings to itself, thereby confirming its wealth and culture by constructing such a luxurious palace with its impressive facade. It was constructed in a combination of Gothic and Renaissance styles, according to the project by the talented head engineer of the Dubrovnik Republic, Paskoje Milicevic. Its exuberant beauty confirms the originality and its distinctive construction, what could be called the Dubrovnik way -the successfully realization of the expressive possibilities of various styles in the exceptionally harmonic architecture of this palace resembling lace cast in stone. Its construction began in 1516. The Andrijic brothers, from the well known Korcula family of builders and sculptors did all the carving and stone works. The palace was originally intended to be a custom's house where traded goods brought here from all corners of the world by the traders were to be taxed. The palace courtyard, entirely in arcades, was the liveliest trading centre and the meeting place for the business people of the Republic. One of the wings was home to the mint, founded in the 14th century, where coins were printed for the Republic and which operated out of this palace right up until the fall of the Republic. Near the end of the 16th century, the Sponza Palace became the cultural centre of the Republic. Here is where the most educated citizens of Dubrovnik met in their association "Academy of the Learned", which had its seat in this palace, to discuss literature, art and all the scientific achievements of the time. The first school in Dubrovnik was also organized at the Sponza Palace.

Today the Sponza Palace, peaceful and dignified, guards the most precious historical documentation of Dubrovnik: the Dubrovnik archive which contains materials from the oldest history of Dubrovnik and the surrounding areas, from all the centuries past to the present day. The palace itself became, in its own way, one of the precious documents of that archive. Undamaged in the earthquake, it steadfastly awaited out time, to prove to us all what lavish palaces Dubrovnik had, powerful and wealthy, in the time before its catastrophes. The square before Sponza Palace is the site of the opening ceremonies of the Dubrovnik Summer Festival. From the terrace above the veranda before the Sponza Palace, actors dressed in the costumes of the Rector and the Dubrovnik aristocrats evoke the past of the cultural manifestations and the freedom of the Dubrovnik Republic.

The book promotion: "ANAMNESIS: Dialogues of Art in Public Spaces"

Exhibition Opening | NIKOLINA ŠIMUNOVIĆ: A SUMMER IN THE CITY

Exhibition Opening | In the Memory of Pređo

I. Vidić: At the Pearly Gates