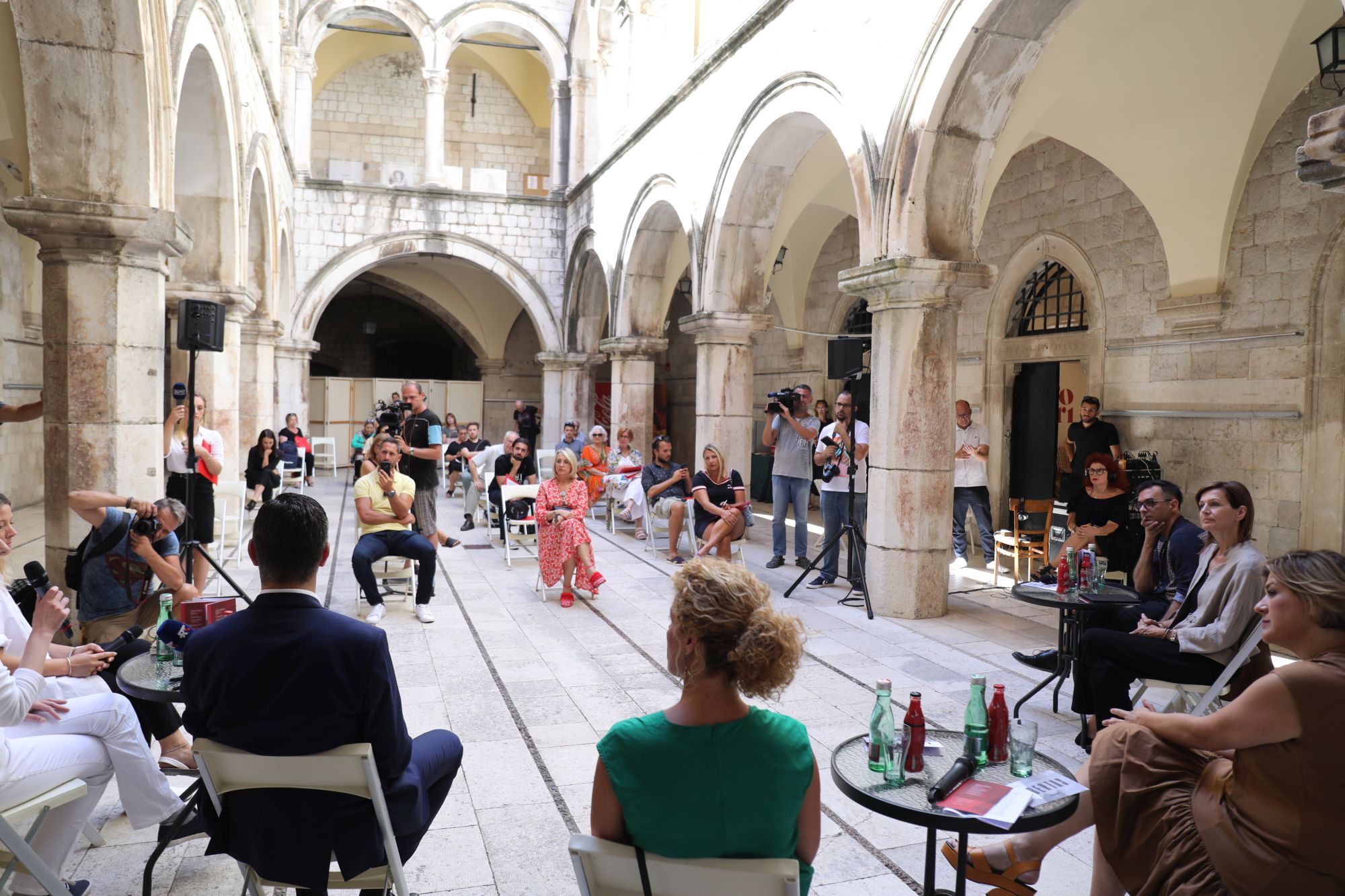 The 71st Dubrovnik Summer Festival will traditionally be held from 10 July to 25 August, but in a reduced form due to epidemiological measures against COVID-19 currently in force in Croatia and worldwide and financial consequences of the pandemic. During 47 days of the Festival, the audiences will be presented with nearly 50 theatre, music, dance, folklore and other performances on 13 site-specific locations in Dubrovnik, announced the Festival’s Artistic Director Dora Ruždjak Podolski, Executive Director Ivana Medo Bogdanović and Assistant Director for Theatre Saša Božić at the press conference held on Wednesday, 8 July at the Sponza Palace, while the Mayor of Dubrovnik Mato Franković and Deputy Prefect of the Dubrovnik-Neretva County Žaklina Marević expressed their support to the Festival.

- I am exceptionally proud that the 71st Dubrovnik Summer Festival will be held, primarily thanks to the support of Minister Obuljen Koržinek, who had a vision and desire for the Festival to continue this year. For this reason, we haven’t been sleeping during the pandemic but had constructive conversations on relation Dubrovnik - Zagreb about new forms and modalities that should mark this year’s Festival. We were very hopeful that this would happen and here we are today. We are one of the few festivals that will be held despite the circumstances and we must be aware and proud of that fact – Artistic Director Dora Ruždjak Podolski pointed out.

Raising of the Libertas flag on St John’s Fort will mark the opening of the 71st Dubrovnik Summer Festival on Friday, 10 July at 21:00 at the Old City Port. On this occasion, the Dubrovnik Symphony Orchestra will be conducted by Tomislav Fačini, and they will be joined by the Croatian Radio and Television Jazz Orchestra conducted by Miron Hauser, pianist Aljoša Jurinić, mezzo-soprano Dubravka Šeparović Mušović and saxophonist Ivan Bonačić, with the participation of the Festival Drama Ensemble and Linđo Folklore Ensemble.

- We will see the Necromancer arriving in the City and, as we witness his necromancy at work regardless of the current epidemiological situation - the Festival is open. The Necromancer appears and wakes up the City and people – said the director of the Opening Ceremony Marina Pejnović as she elaborated on the concept of the ceremony. 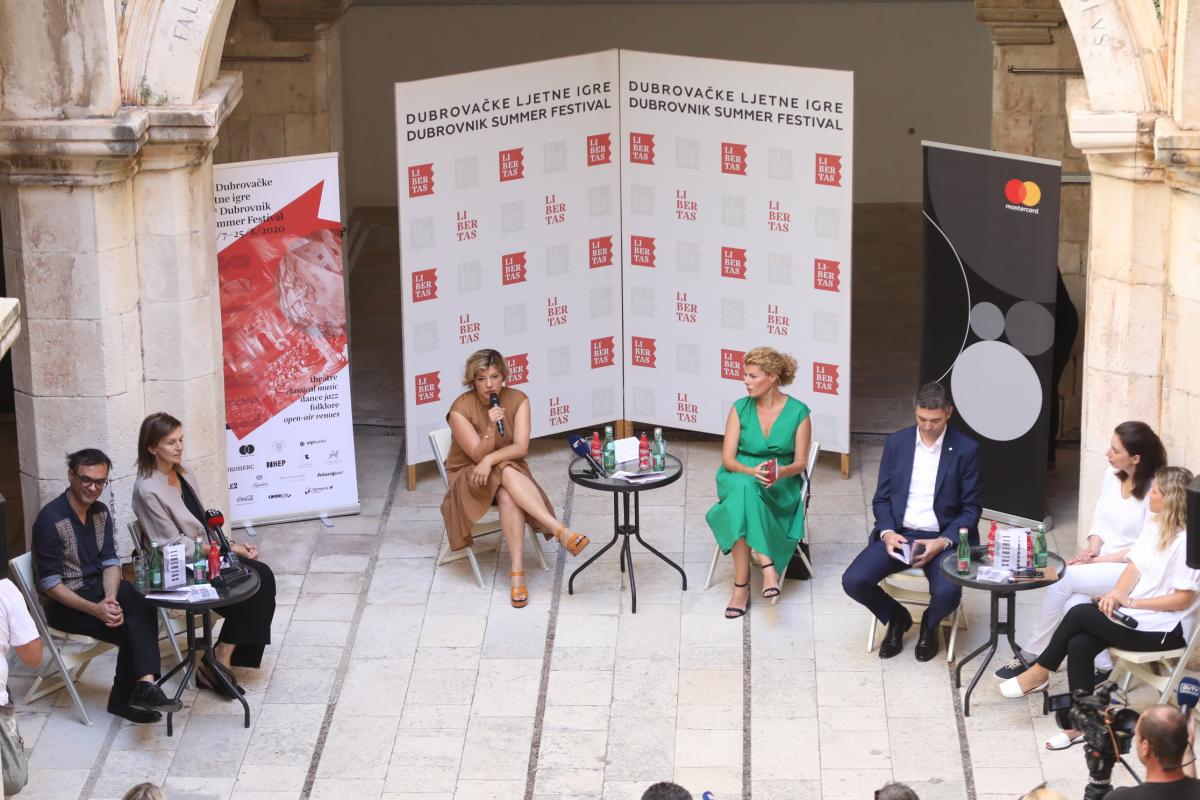 The first drama premiere will be Mara & Kata, a project by Saša Božić inspired by Radio Dubrovnik’s popular show At Home with the Gossipmongers by Petar Kušelj and Desa Begović Mrkušić’s book The Gossipmongers of Dubrovnik. Nataša Dangubić as Mara and Doris Šarić Kukuljica as Kata will take the audience from St Mary’s Quarter on an absurd journey through the City form the end of the 1990s until recent times. Another premiere will take place towards the end of July, Mirrors of Dubrovnik – Three Sprays of Laurel, Wormwood and Heather directed by Dora Ruždjak Podolski and Marina Pejnović, based on the poetry of older and contemporary poets of Dubrovnik by the dramaturge Hrvoje Ivanković. The main scenes, performed by the Festival Drama Ensemble consisting of Nikša Butjer, Glorija Dubelj, Andrej Kopčok, Iva Kraljević, Lujo Kunčević, Romano Nikolić, Doris Šarić Kukuljica, Dražen Šivak, Livio Badurina, Nataša Kopeč, Maro Martinović and Šimun Stanko, will be taking place at three locations in the Old City: Pustijerna, Mrtvo zvono and Na Andriji. Another premiere take place at the Collegium Ragusinum playground at the beginning of August, the musical play for children and youth The Golden Book – Fairy Tales from the Dubeovnik Area directed by Helena Petković, co-produced by the Festival and Marin Držić Theatre based on the book by Aleksandra Piteša and Ivica Kipre published by Dubrovnik Museums. The author of the music is Ivan Končić, while the chamber orchestra composed of some of the best Dubrovnik musicians will be conducted by Franko Klisović. This summer, the Festival audience will also have the opportunity to enjoy Marin Držić’s play Grižula directed by Saša Božić and Petra Hrašćanec in Gradac Park from 20 August. The play was created as part of the Future Epics project co-funded by the EU Creative Europe Programme and it will be performed by the members of the Festival Drama Ensemble Ozren Grabarić, Nataša Dangubić, Perica Martinović, Branimir Vidić and Boris Barukčić, with participation of Acting and Dance students of the Academy of Dramatic Art, University of Zagreb.

Theatre programme of the 71st Dubrovnik Summer Festival also includes visiting performances of Three Sisters, Bobo Jelčić’s project based on Chekhov performed by the Drama Ensemble of the Croatian National Theatre of Zagreb, and the acclaimed play Who is Afraid of Virginia Woolf? of Ulysses Theatre and Belgrade Drama Theatre, directed by Lenka Udovički with Rade Šerbedžija in the leading role. The collaboration with the Split Summer Festival brings the visiting performance of the play Marta and the Seven Fears produced by KUFER Theatre Company and KunstTeatar in collaboration with BoliMe Association based on Ivana Vuković’s text and directed by Natalija Manojlović, while Zagreb Dance Company will perform Up and Up. The youngest audiences will enjoy two plays by the City Puppet Theatre Split in the Inter-University Centre Atrium, Home Dwellers by Ana Marija Veselčić co-produced with the Split Art Academy, and Goga the Millipede based on Adrijana Grgičević’s text, co-produced with the Poco Loco Theatre.

If the epidemiological situation allows it, choreographer Meleat Fredriksson’s dance show Embrace will also be performed this season, produced by the Vytlicke Centre for Performing Arts from Sweden, in which dancers explore ‘black’ or ‘African view’ as a way of questioning dominant values within the western society, and the play Intimacy authored Biljana Srbljanović and Andrej Nosov produced by the Heartefact  Fund from Belgrade as part of the Future Epics EU project. 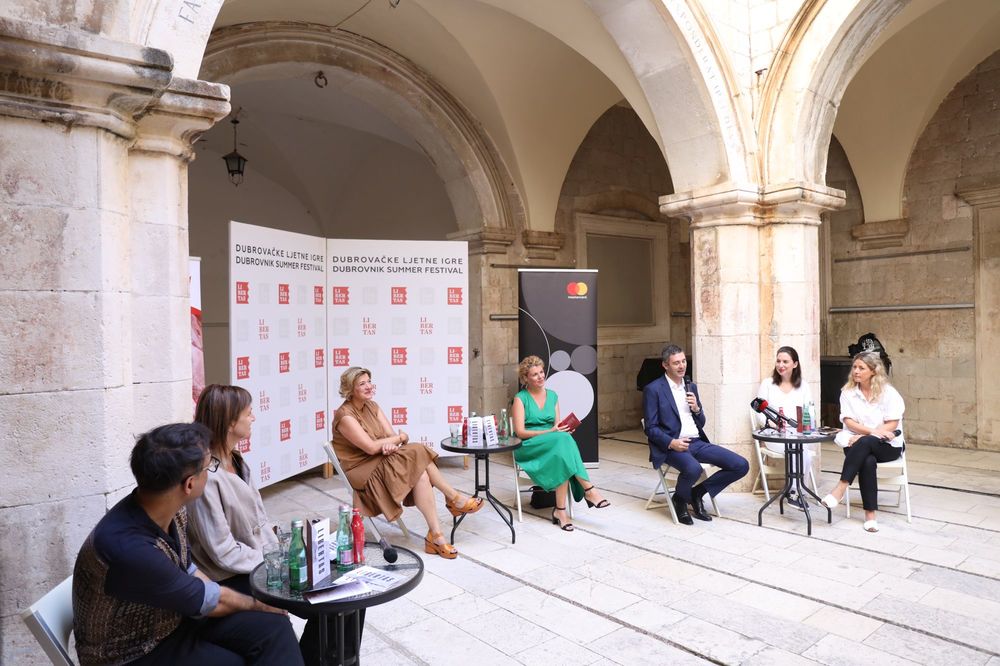 The staples of the 71st Dubrovnik Summer Festival’s music programme are distinguished Croatian musicians, winners of prestigious international awards and competitions, and it opens on Saturday, 11 July with Aljoša Jurinić’s piano recital A Monument to Beethoven in the Rector’s Palace Atrium. Apart from being one of Croatia’s most promising young musicians and the winner of the Vladimir Nazor Award in 2015 and Milka Trnina Award in 2017, Aljoša Jurinić is also the winner of the prestigious Robert Schumann Competition for Pianists, finalist of the 17th International Chopin Piano Competition in Warsaw and laureate of the Queen Elisabeth Competition in 2016, while last year he won the Orlando Award for his performance with cellist Luka Šulić at the 70th Dubrovnik Summer Festival. In addition Beethoven’s Sonata No.21 in C minor and Andante favori, which was initially conceived as part of the Waldstein Sonata, Aljoša Jurinić will perform the works by Schumann and Mendelssohn composed for the purpose of raising the monument to Beethoven in his hometown of Bonn.

Trio Eusebius, the winner of the 16th Ferdo Livadić Competition for Young Musicians, composed of violinist Eva Šulić, cellist Tonka Javorović and pianist David Vuković, will also perform at the Festival, while Dalibor Cikojević and Zrinka Ivančić piano duo will perform Papandopulo’s dance suite Horoscope at the Rector’s Palace accompanied by percussionists Karmen Pervitić and Fran Krsto Šercar with the participation of young dancers Viktorija Bubalo and Šimun Stankov. Members of the Papandopulo Quartet, saxophonists Nikola Fabijanić, Goran Tudor, Goran Jurković and Tomislav Žužak, are dedicated to promoting contemporary music, especially young Croatian and international composers, and the programme of their concert in front of St Ignatius Church this summer consists of works by Boris Papandopulo, Goran Tudor and Petar Obradović. The concert of the Dubrovnik Symphony Orchestra and pianist Marijan Đuzel in Gradac Park under the baton of young Italian-Turkish conductor Nil Venditti will be a true musical treat as the programme includes Beethoven’s Emperor Concerto and Symphony No. 1 on the occasion of the 250th anniversary of this famous composer’s birth. This year’s music programme also includes an evening of chamber music dedicated to Dubrovnik’s musicians entitled Dubrovnik on a Rock of Music, created in collaboration between the Festival and Caboga Stiftung Foundation. In addition to the works of Spanish masters, the renowned musicians mezzo-soprano Janja Vuletić and guitarist Maroje Brčić will premiere Zoran Juranić’s Songs From the Bottom of the Chest in the Rector’s Palace Atrium, while the 71st Dubrovnik Summer Festival will be closed with a spectacular concert of the Croatian Radio and Television Symphony Orchestra, conducted by maestro Ivo Lipanović, and world-renowned opera stars, soprano Lana Kos and baritone Željko Lučić. The closing concert is supported by Mastercard and it will take place in front of the Cathedral on 25 August.

Rich Croatian folk dance and music heritage will be presented this year by the Linđo Folklore Ensemble at their performances in Gradac Park, as well as by FA Linđo traditional female vocal group in concert celebrating their twentieth anniversary which will be held in Rector’s Palace Atrium. Other Festival programmes include the traditional free entry screening of the Croatian winner of the Pula Film Festival at Jadran Open-Air Cinema and film screening and lecture entitled Food as a Delicious Means of Persuasion by the Kinookus Association at the Bunić-Kaboga Summer Villa. Sponza Palace will host exhibitions of Dubrovnik artists: Ivana Selmani’s The Horizon of Reminiscence on 12 July and Viktor Daldon’s Time out on 11 August, while Igor Hajdarhodžić’s exhibition Dubrovnik is Sailing will be opened at the Lazareti Plateau on 25 July.

As she commented on this year’s financial situation Executive Director Ivana Medo Bogdanović said that the 71st DSF’s current budget is reduced by nearly 60% compared to what was initially planned, and it amounts to HRK 6.5 million.

- The Festival will have to be held this year with significantly reduced funds from ticket income and leases and without the financial support of tourist boards, but it is strongly supported by our sponsors and donors, who supported the Festival with nearly HRK 2 million. I would especially like to thank the Caboga Stiftung Foundation, Mastercard, OTP Bank, HEP, ALH, Tele2, Kraš and Coca-Cola for their traditional support, as well as our new partner Euroherc. Without them, this year’s Festival would not be possible. Reduced budget affects both the programme and organisational aspects, but the fact that the Festival will take place at all is a big success - Medo Bogdanović pointed out. 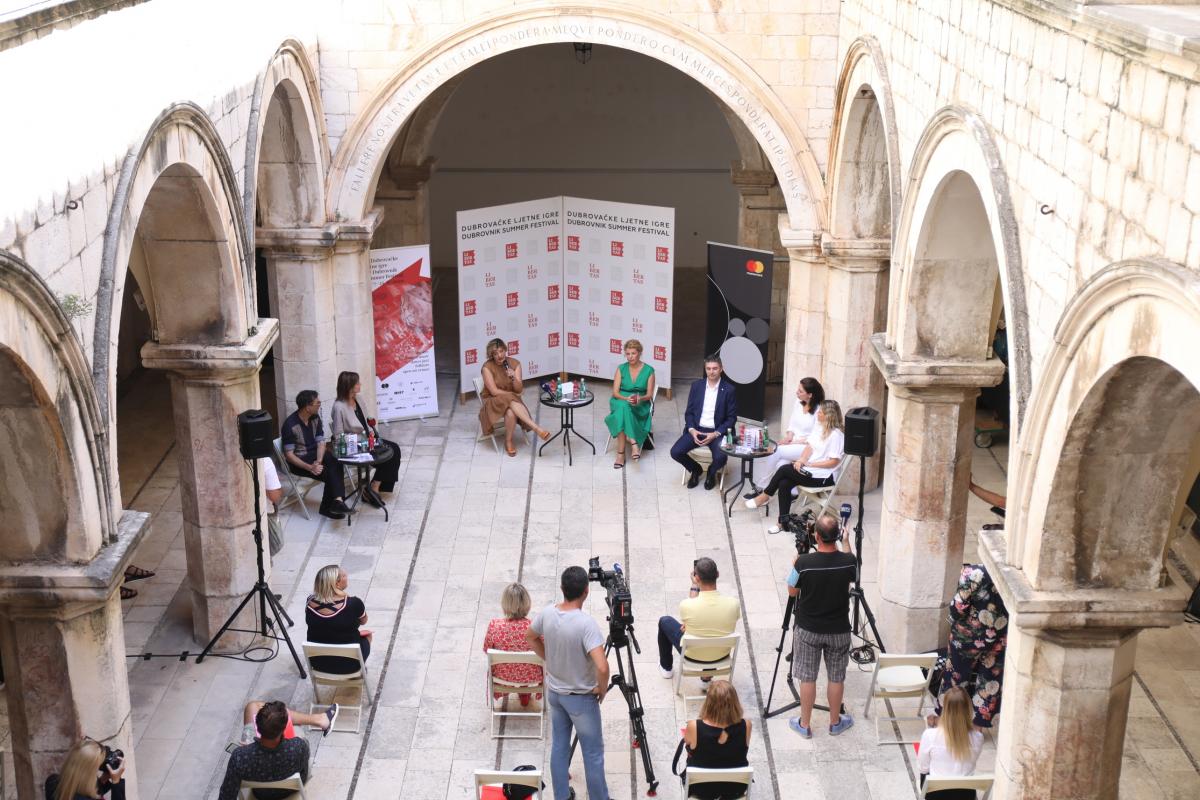 The Dubrovnik Summer Festival will comply with the recommendations of the Croatian Institute of Public Health for preventing the spread of COVID-19 disease during all festival events, and we kindly ask the audience to do the same. Records of participants will be kept for each event as well as records of spectators, who will be required to leave their name and contact number when buying tickets. Festival ticket sales points will have protective screens between cashiers and visitors and contactless payment will be made available. All seats and standing places will be marked and placed at least 1.5 metres from each other and the recommended distance of 4 metres between the audience and performers on stage will be kept. The audiences will have disinfectants at their disposal and wearing protective masks is also recommended.