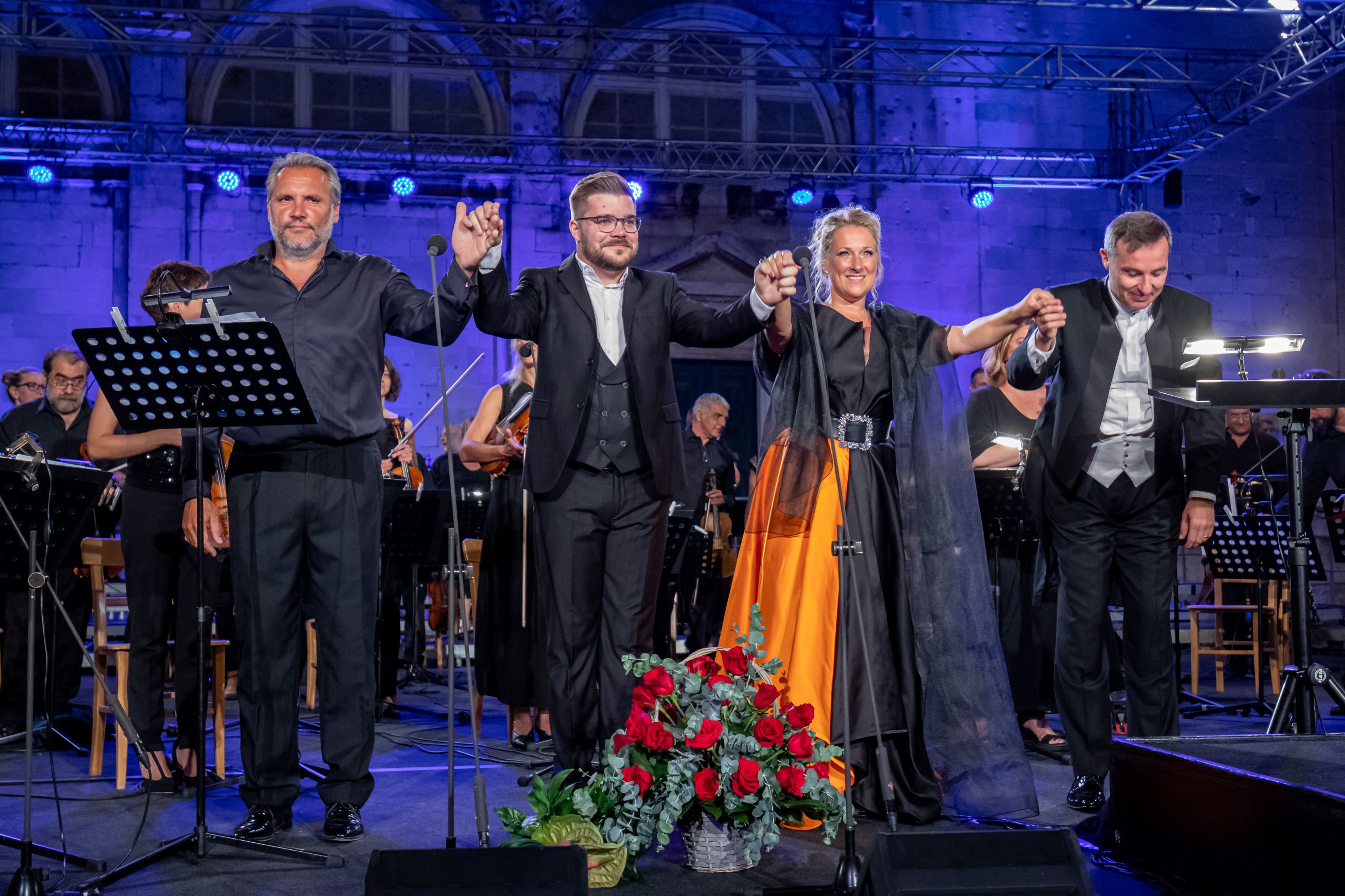 The 72nd Dubrovnik Summer Festival closed last night, 25 August, in front of the Cathedral with a magnificent opera gala featuring opera stars, coloratura soprano Diana Damrau and bass Nicolas Testé, with young tenor Roko Radovan and the Croatian Radio and Television Symphony Orchestra conducted by maestro Ivan Repušić. The gala was followed by a brief closing ceremony in which Gloria Dubelj recited verses by Milan Milišić while Dubrovnik actors and musicians brought out and folded up the Libertas flag until next summer, accompanied by the beloved song La musica di note which the audience sang along with the opera soloists. 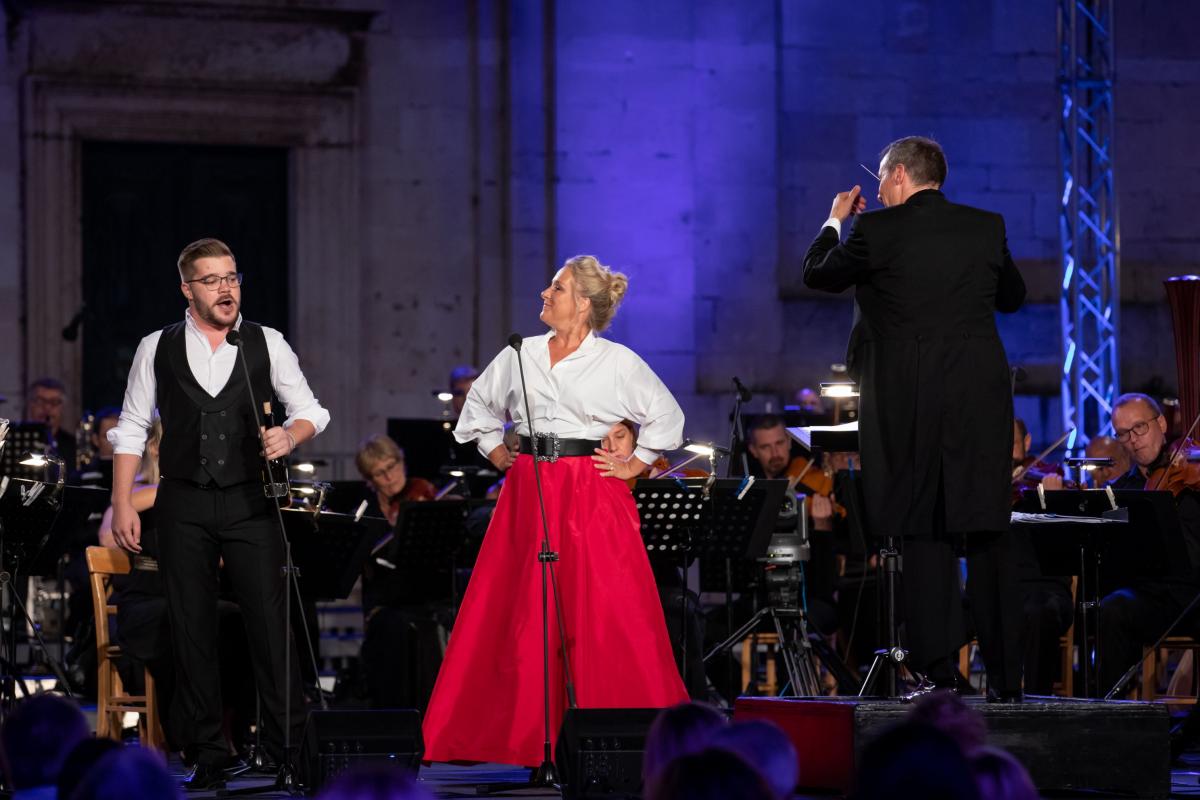 The magnificent musical finale, which will surely be remembered for a long time to come, was marked by top interpretations by Diana Damrau, Nicolas Testé and Roko Radovan and an outstanding performance by the Croatian Radio and Television Symphony Orchestra under the decided lead of the festival's favourite maestro Ivan Repušić whose charisma and energy garner high praise from critics and audiences alike. The carefully chosen repertoire of last night's opera gala, which was broadcast live on the First Channel of Croatian Television – HRT 1, opened with the Vorspiel Akt 3, or the Prelude to the 3rd act of Richard Wagner’s Lohengrin, a perfect piece to start off the grand occasion due to its exciting and lively character. Diana Damrau, who has been performing on the world's leading stages for two decades and delights in interpretations of lyrical and coloratura soprano roles, is a regular at the Bavarian and Vienna State Opera, La Scala Theatre, Paris National Opera and others. She chose to sing Ständchen and Wiegenlied by Richard Strauss, the soprano’s favourite composer who is an integral part of her Lieder repertoire. Her powerful and voluminous voice blended perfectly with the orchestra, and her power on stage combined with a persuasive and playful flair delighted the audiences in front of the Cathedral. The life companion of this top-rate soprano, with whom she often shares world stages, the French bass Nicolas Testé impressively performed Daland's aria from the 2nd act of Wagner's Der Fliegende Holländer (The Flying Dutchman). After German composers who are not heard as often on festival stages, the longing Intermezzo from the opera Manon Lesacaut by the great Italian composer of opera verismo Giacomo Puccini followed. Diana Damrau then presented a true treat to the festival audience with her performance of the aria Sì. Mi chiamano Mimì, from Puccini's opera La Bohème, one of the most beautiful and popular soprano arias, which in and of itself was a unique and unforgettable experience. The duet of Adina and Nemorin Caro elisir from Gaetano Donizetti's L’elisir d’amore (The Elixir of Love) was performed by the young tenor Roko Radovan, still a student of singing at the Music Academy in Zagreb, whose talent, voice and playful performance of the duet with Damrau won over and enchanted everyone in the audience. The programme was continued by the orchestra playing the Waltz from Charles Gounod's opera Faust, and Testé's interpretation of Soliman’s aria Sous les pieds d'une femme from Gounod’s La reine de Saba (The Queen of Saba) while Romeo’s aria L'amour! L'amour! ... Ah! leve-toi, soleil! from his Romeo and Juliette was performed by Radovan. The perfect ending to the programme was the overture and aria Casta diva from Vincenzo Bellini's opera Norma. Damrau performed this extraordinarily beautiful and ever-popular but also extremely difficult aria with an ease and sophistication that is rarely seen. 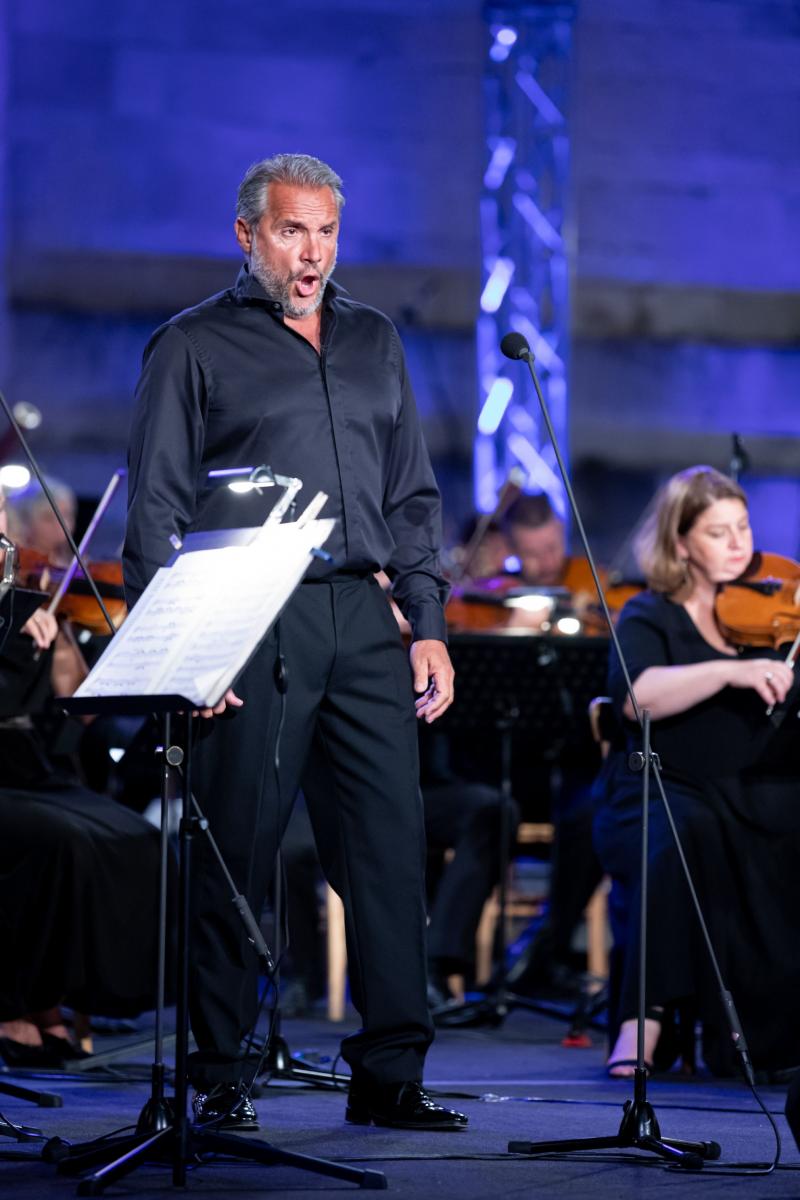 Each piece was followed by thunderous applause, and especially long applause ensued at the end when the audience showed their great appreciation and delight, inviting the musicians to a bow individually and together several times. In gratitude, all three soloists performed musical additions – Nicolas Testé Tatiana's husband aria from the opera Eugene Onegin by Peter Ilyich Tchaikovsky, Roko Radovan the aria Dein ist mein ganzes Herz (You Are My Heart's Delight) from the operetta The Land of Smiles by Franz Lehar, followed by Girls from Cadiz by Leo Delibes, a picturesque musical miniature inspired by the liveliness of the Spanish port of Cadiz, masterfully performed by Diana Damrau. 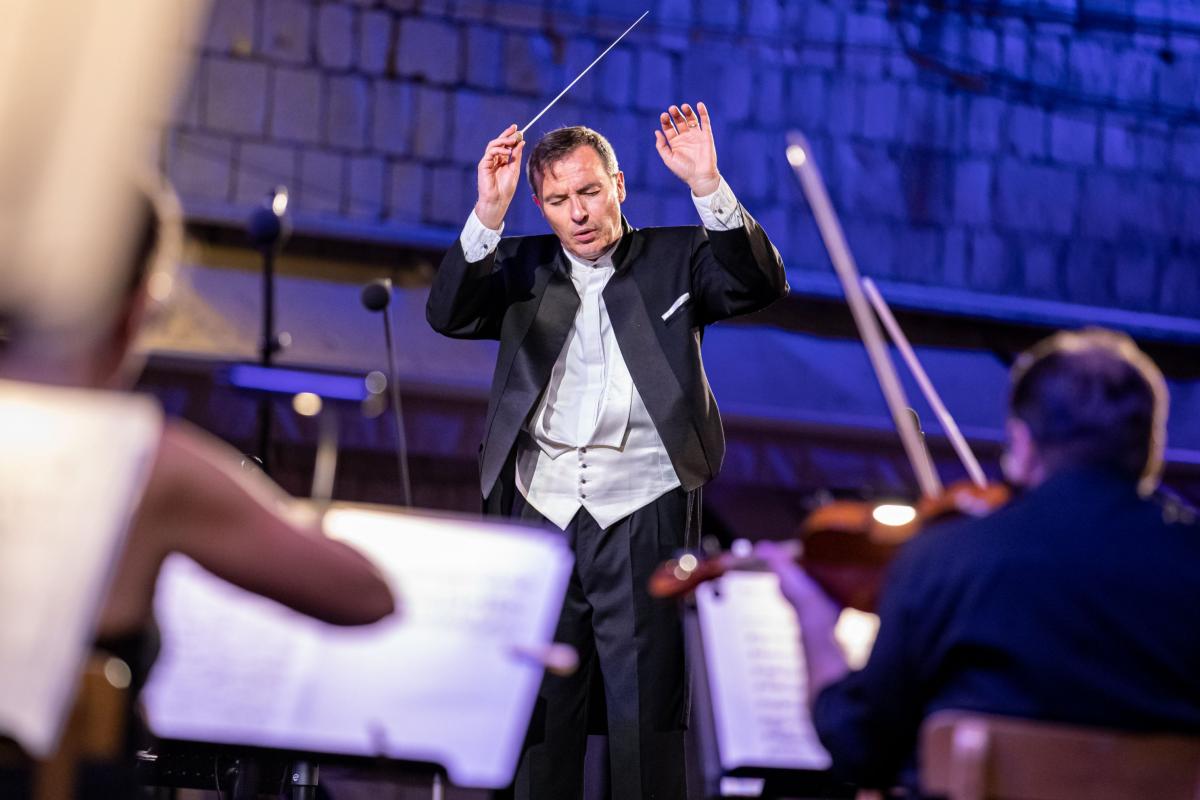 After that, the thespian Gloria Dubelj came on stage to recite soulful excerpts from several Milan Milišić poems, and when all three opera soloists started singing La musica di notte by Đelo Jusić, which was arranged especially for this occasion by Tomislav Fačini, the audience was “conducted” to join in the singing by maestro Repušić. It was remarkable to hear Diana Damrau and Nicolas Testé singing the verses to this iconic song of Dubrovački trubaduri in Croatian, a song which is especially beloved and important to Dubrovnik and its citizens. Members of the Festival Drama Ensemble Doris Šarić Kukuljica, Perica and Maro Martinović, Branimir Vidić Flika, Romano Nikolić and Nikša Butijer with musicians Marija Grazio and Eva Šulić, brought out the unfurled Libertas flag, folded it up to the last bars of La musica di notte and put it away until next summer and the 73rd edition of the Dubrovnik Summer Festival. 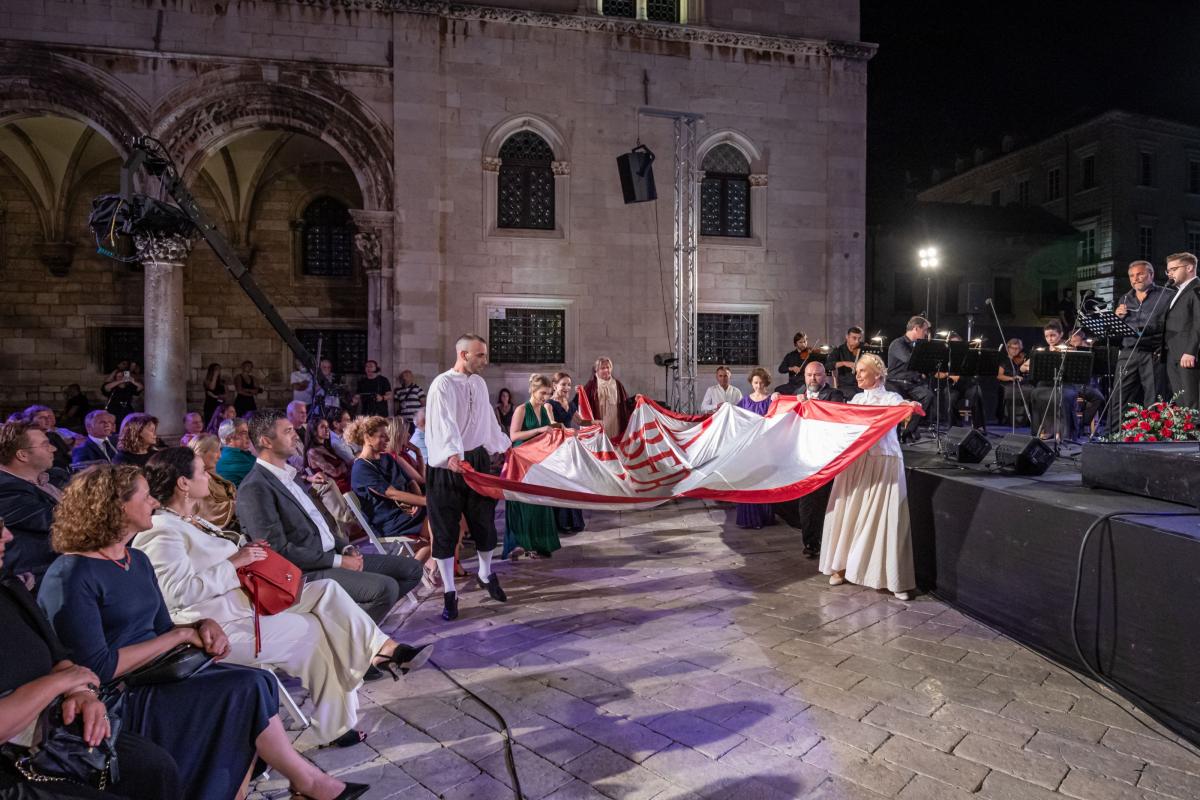