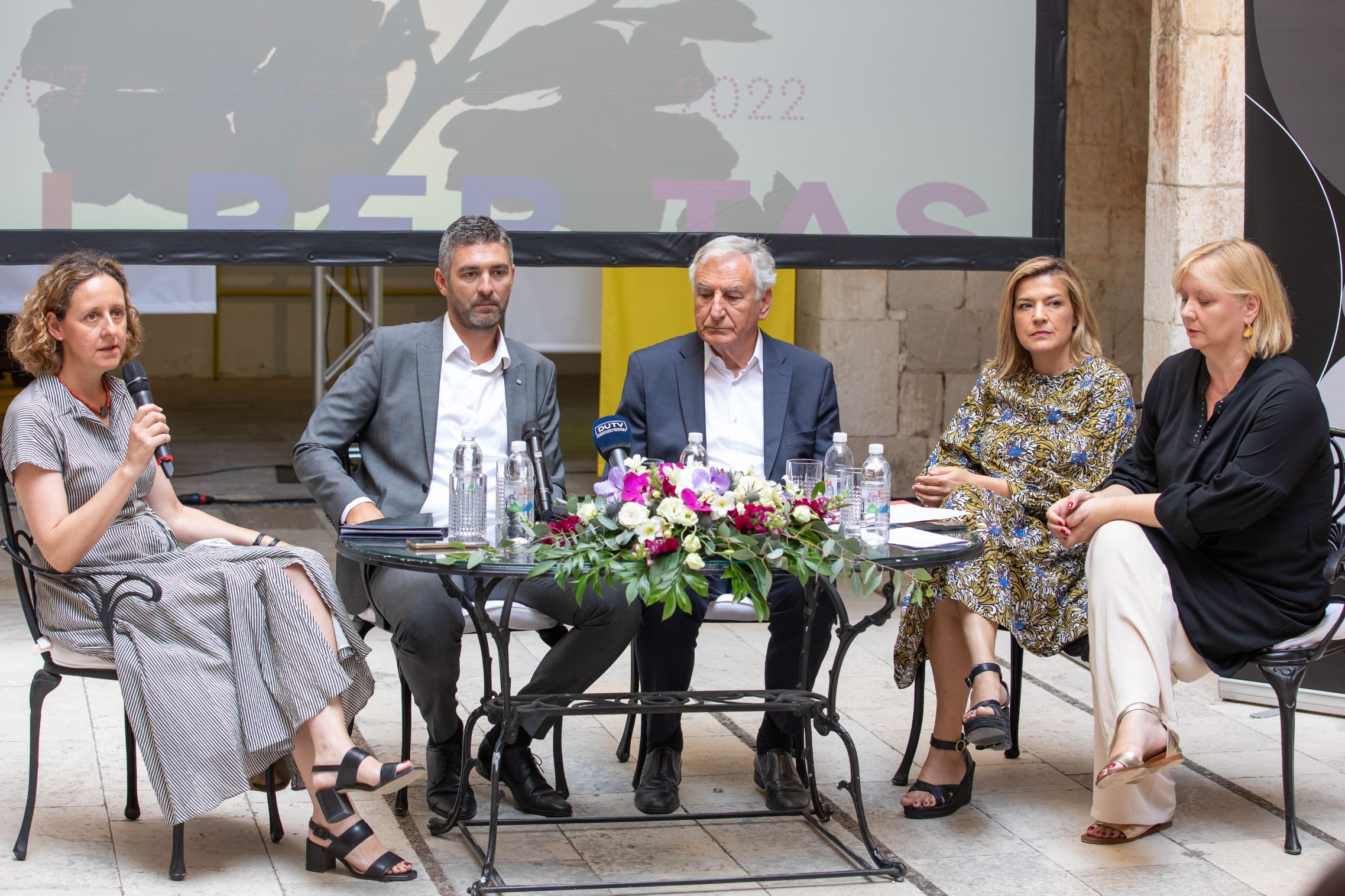 The Dubrovnik Summer Festival has successfully brought another season to its end, holding a total of 74 drama, music, ballet, folklore, film, art and children's programmes during 47 days, from 10 July to 25 August at 17 site-specific locations in the city of Dubrovnik, as was concluded at the press conference on the occasion of the closing of the Festival held in the Sponza Palace Atrium today, and in which the Festival leadership, POA Paulina Njirić and Artistic Director Dora Ruždjak Podolski, took part in, as well as the Minister of Culture and Media, Ph.D. Nina Obuljen Koržinek, Mayor of the City of Dubrovnik Mato Franković and Dubrovnik-neretva County Prefect Nikola Dobroslavić. There, the final concert held by the Croatian Radio and Television Symphony Orchestra with soprano Adela Zaharia and young tenor Filip Filipović under the direction of maestro Ivan Repušić was announced, taking place tonight, 25 August at 10 p.m. in front of the Cathedral, and with which traditionally the 73rd Dubrovnik Summer Festival Festival will be closed. 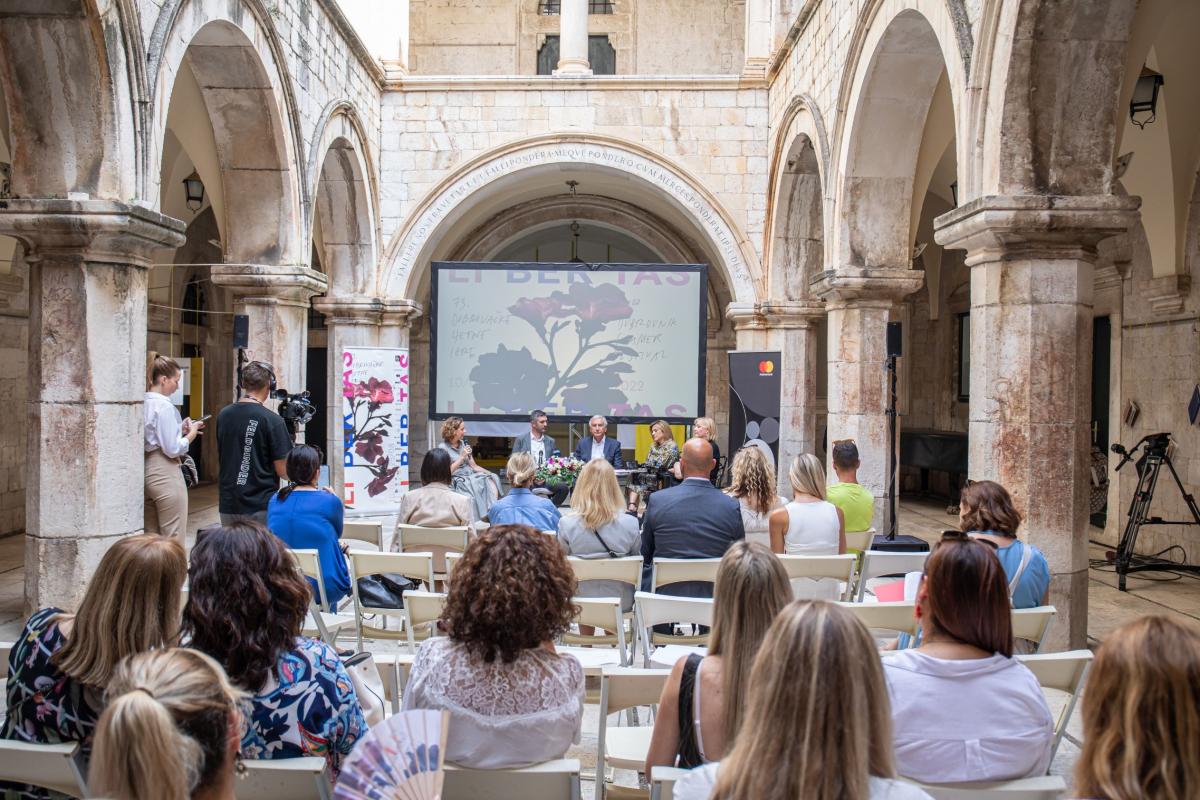 The Minister of Culture and Media, Nina Obuljen Koržinek, took this opportunity to thank and congratulate the Dubrovnik Summer Festival leadership of the Festival on the realization of this year's festival, adding that she is happy that after two pandemic years, the normal way of working, organizing and producing such a demanding project has been restored. She pointed out that the Dubrovnik Summer Festival is the oldest and largest national festival that regularly produces top artistic achievements in its programmes, as evidenced by the Orlando Awards, which preceded the press conference. Mayor Mato Franković and Prefect Nikola Dobroslavić joined in the congratulations, also expressing satisfaction that the Festival returned to its full capacity this year.

This year's first premiere drama title, staged in July at the new festival location in front of St Jacob’s Church, was one of the most famous 17th century comedies from the 17th century, the so-called smiješnica (a kind of prose comedy) Lovers directed by Aleksandar Švabić and performed by the Festival Drama Ensemble, with the support of OTP Bank. All performances were sold out days in advance, and the themes of the relationship between master and servant, and the mocking of greed, artifice, false learnedness, superstition and courtship all made the festival audience laugh. The culmination of the drama programme was reached in August with the premiere staging of the cult Federico García Lorca tragedy Blood Wedding by director Franka Perković Gamulin, performed by the Festival Drama Ensemble at two locations on the island of Lokrum. This Lorca tragedy is set in the rural environment of the first half of the twentieth century, but due to the universality of the story on which it is based, it avoids confinement to any literal or concrete time frame. The play was staged with sponsorship by HEP (the Croatian Electric Company) and with the support of the Lokrum Reserve.

The festival audience also had the opportunity to enjoy three returning plays: Shakespeare's Hamlet directed by Paolo Magelli and performed by the Festival Drama Ensemble, last year's successful premiere play Lion House directed by Aida Bukvić based on the eponymous Ivan Salečić novel, and Mara and Kata by director Saša Božić with performances by Doris Šarić-Kukuljica and Nataša Dangubić, for which extra tickets were sought after this year as well. This year's drama programme also included a guest performance of the Croatian National Theatre in Zagreb with My Brilliant Friend, a theatre adaptation of the popular novel of the same name by the contemporary Italian writer Elena Ferrante, directed by Marina Pejnović. Their traditional part in the festival programme had the Lero Student Theatre with Ladies’ Park by the director Davor Mojaš, while the youngest festival audience, with the support of the Caboga Stiftung foundation, enjoyed the premiere of the musical-theatre piece The Enchanted Forest directed by Lea Anastazija Fleger, based on the adaptation of the eponymous novel of the beloved Croatian writer Sunčana Škrinjarić, as well as the plays The Story of a Wheel and the Princess and the Pea put on by the Mala scena theatre.

This summer's music programme presented the Dubrovnik audience with top domestic and international names, and it was opened by a concert of the acclaimed Spanish soprano Nuria Rial and the Accademia del Piacere ensemble led by artistic director and author of the programme's concept, Fahmi Alqhai, who performed an early music programme entitled Muera, Cupido and supported by Adriatic Luxury Hotels, introducing the audience to a part of the 18th century Spanish theatre music. An evening dedicated to Croatian music was held by the Dubrovnik Symphony Orchestra String Chamber Ensemble, with young soloists Franjo Bilić on the harpsichord and Lovro Merčep on the saxophone, under the baton of maestro Ivan Hut, while an unforgettable night coloured by a mix of blues, jazz, funk, R'n'B and soul by world-renowned multi-instrumentalist Cory Henry was set in Gradac Park, sponsored by Mastercard. The 73rd Festival music programme continued with a concert by one of the best Croatian pianists, Lovro Pogorelić, and his excellent piano recital. A musical journey through the centuries and moods followed, under the title Stories of Love, Hope and Despair, as performed by the Zagreb Quartet with soloists, Žarko Perišić on bassoon and Milan Milošević on clarinet. The Dubrovnik audience was won over by the Turkish pianist and composer Fazil Say with his exceptional skill in performing popular Bach variations as well as his own compositions and arrangements, and the same could be said for one of the most respected violinists of his generation, Roman Simović. The ensembles Antiphonus and Concerto dei venti brought all the magnificence of the baroque to the festival audience through a great harmony of voice and instruments, while the marvellous guitarist Miloš Karadaglić delighted all with the Homage to Segovia programme in honour of one of the most important guitarists of the last century, Andrés Torres Segovia. The Dubrovnik Symphony Orchestra earned a standing ovation with their performance, sponsored by Kraš, under the impeccable direction of maestro Dawid Runtz and alongside the young soloists Veronika Ćiković on the harp and Lucija Stilinović on the flute. The virtuoso pianist Vadym Kholodenko presented himself to the festival audience with a piano recital, and he also performed with the outstanding violinist Alena Baeva. This summer's music programme at the Rector's Palace was closed by great Dubrovnik musicians gathered in an exciting ensemble with an unusual selection of instruments and distinct personalities under the baton of Tomislav Fačini and with excellent soloists Đive Franetović Kušelj on the flute and mezzo-soprano Dubravka Šeparović Mušović as part of the unique music programme Dubrovnik on a Rock of Music held this year with the support of the Caboga Stiftung foundation.

The traditional festival performances of the Linđo Folklore Ensemble were held on two occasions in Gradac Park to the delight of local and foreign audiences, while ballet lovers enjoyed the magic of the neo-romantic ballet in two acts Pride and Prejudice by director and choreographer Leo Mujić, performed by first-rate ballet dancers of the Ballet of the Croatian National Theatre in Zagreb. A frequent festival guest, the Zagreb Dance Company did the contemporary dance performance REVEL REVEL choreographed by Roser López Espinosa, taking the audience on a journey exploring freedom.

As part of the 73rd Dubrovnik Summer Festival’s art programme, two exhibitions were put on display – Response by the renowned Dubrovnik artist Izvor Pende, whose abstract works were presented in cooperation with the National Museum of Modern Art on two locations, in the Sponza Palace Atrium and in the Lazareti, and a series of multimedia works Rehearsal Room/Space of Appearance and Disappearance in the Diary of an Actor cycle by drama champion Livio Badurina, who returned to the Festival this summer not as an actor, but as a videographer and photographer. This season’s film programme was marked by anniversaries; the documentary film 80 years of Radio Dubrovnik directed by the doyen of Dubrovnik and Croatian journalism Vedran Benić and the Croatian Radio and Television documentary film Time of Aretej which premiered on the fiftieth anniversary of the first performance of the play Aretej at the Dubrovnik Summer Festival. The traditional cooperation with the Pula Film Festival continued this year as well, thus the Dubrovnik audience enjoyed the screening of the film The Staffroom by director and screenwriter Sonja Tarokić, which took five Golden Arena Awards, namely the Grand Golden Arena for the best film, the Golden Arena for Best DirectOR (Sonja Tarokić), for Best Editing (Borna Buljević), for the Best Actor (Stojan Matavulj in the role of Siniša) and for Best Supporting Actress (Nives Ivanković as Vedrana). As part of the project #synergy: Sharpening the capacities of the classical music industry in the Western Balkans, co-financed by the EU Creative Europe programme, on which the Dubrovnik Summer Festival is partner, two-week residencies were held in Dubrovnik, during which young composers Ardian Halimi from Kosovo and Nina Perović from Montenegro got to know Dubrovnik's rich historical, artistic and cultural heritage, and which will be useful to them when composing a new piece of music inspired by the term Libertas as the project commissioned. Halimi and Perović presented themselves and their work to an interested festival audience as part of the Behind the Stage programme. The accompanying programme of the Festival brought two evenings dedicated to the deceased Dubrovnik greats, namely an emotional poetry evening in honour of the poet Milan Milišić, whose verses selected by Hrvoje Ivanković were performed by Doris Šarić-Kukuljica, Gloria Dubelj and Maro Martinović in the Sorkočević Summer Villa, and in Pile, at the location of the iconic festival production of Sad Jele, an evening dedicated to Ivica Kunčević, the pioneer of contemporary site-specific theatre, was held. A pop-up event specially created for the Dubrovnik audience, a poetry and music evening entitled Sundial: Meeting Lorca, brought performances by the Antiphonus ensemble and actors Gloria Dubelj and Marko Capor, which with the support of the Caboga Stiftung was a kind of announcement of this year's final festival drama premiere, Lorca's Blood Wedding. The Dubrovnik Summer Festival joined the celebration of the 750th anniversary of the promulgation of the Dubrovnik Statute, the basis of the legal order of the Republic of Dubrovnik, with the special programme Liber Statutorum Civitatis Ragusii performed by Doris Šarić-Kukuljica, Perica Martinović and Nataša Dangubić. The Festival also marked the 75 years of Indian independence with an excellent combination of traditional and modern form of Indian classical music that connects all generations equally as performed by sarod musician Arnab Bhattacharya and Rohen Bose on tabla to the curious festival audience.

After summarizing the successful festival season, Artistic Director Dora Ruždjak Podolski thanked the Ministry of Culture and Media, the City of Dubrovnik and the Dubrovnik-neretva County, as well as all the sponsors and donors led by the Caboga Stiftung foundation for their financial support, announcing also that the programme for the upcoming 74th Dubrovnik Summer Festival has already been prepared. To conclude, the Dubrovnik Summer Festival’s POA Paulina Njirić, give thanks to all the financiers, but also to all those who helped in any way in the realization of the festival, especially to the loyal Dubrovnik audience for their support and cooperation, without which this year’s Festival too would not be possible. 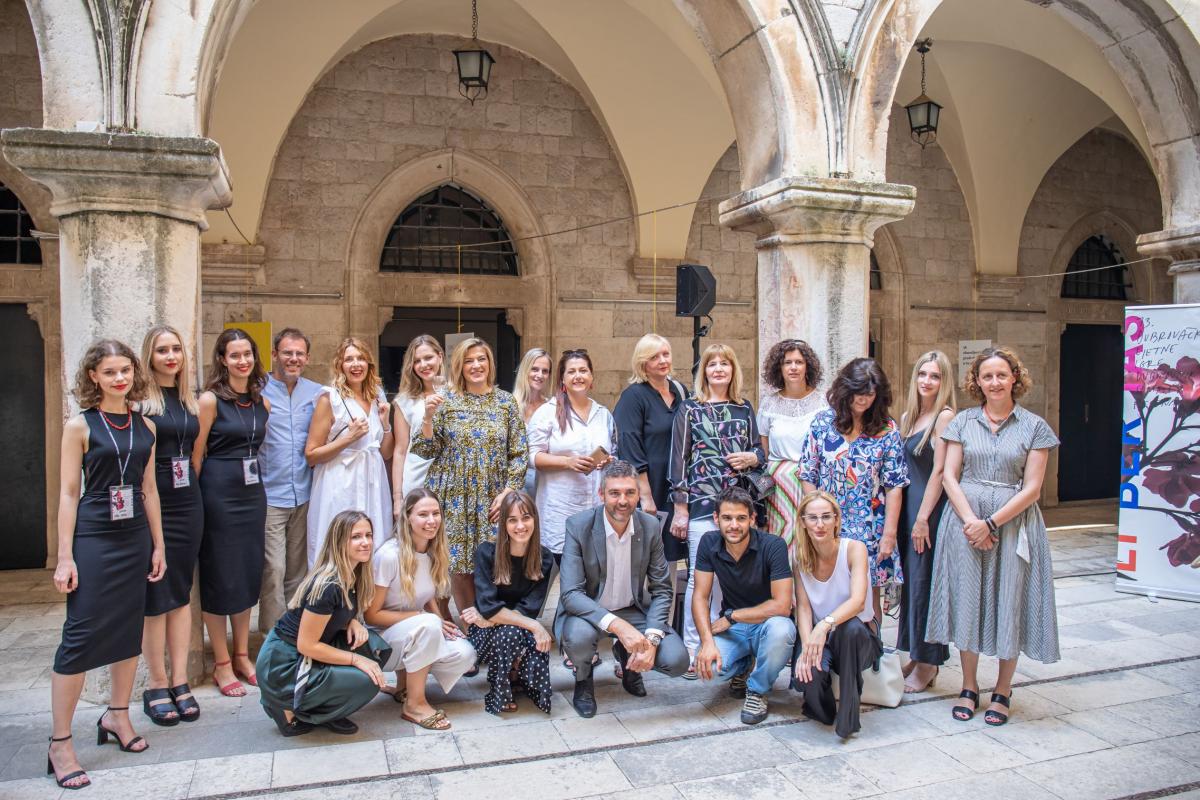