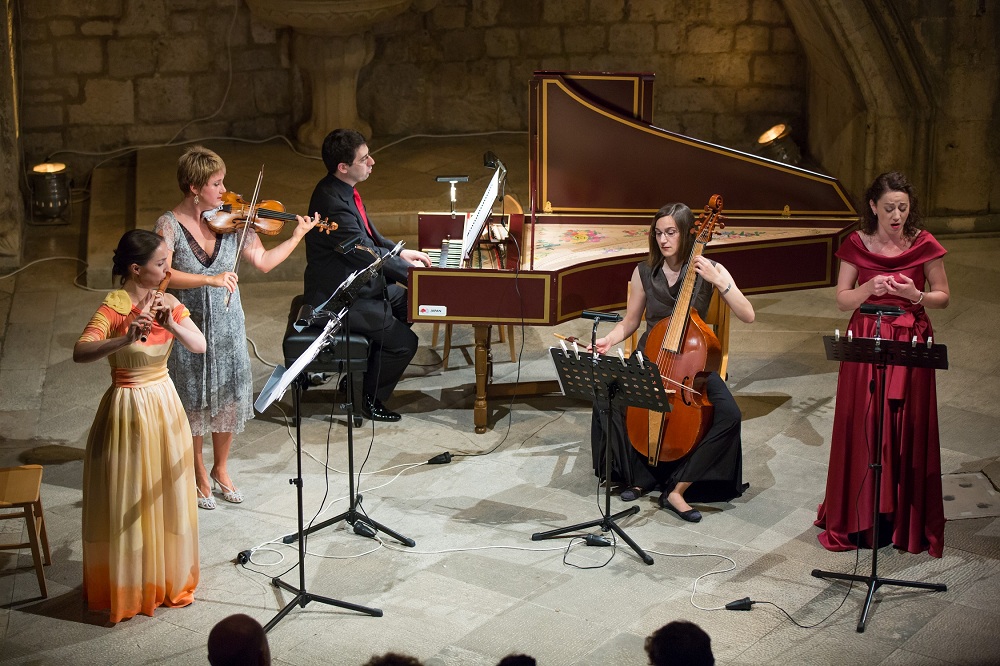 The Croatian Baroque Ensemble treated the Festival's audience to a pleasant, meditative evening of Baroque music performed with original instruments, under the programme entitled “L’Amour Tendre, L’ Amour Cruel”. The meditative sound and colour of the music created by the dulcet Baroque instruments accompanied by the human voice, which is nevertheless the most beautiful instrument, successfully created an atmosphere beyond every dimension. The audience was most touched by the performance of Couperino’s 14e Ordre in which the flute imitates the twitter of nightingales (Rossignol). Along with F. Couperino, the works of other great Baroque masters  - J. P. Rameau, M. P. Montéclair, L. N. Clérambault and F. L. Colin de Blamont were performed.

The most notable Croatian ensemble, specialised for loyal interpretations of music from the Baroque era and similar epochs using original instruments and their loyal replicas, was founded in 1999. Along with regular concert cycles in the Croatian Music Institute in Zagreb, they are regular guests of countless national and international festivals in Varaždin, Zagreb, Dubrovnik and Zadar, to Brežica, Vienna, Rome and Pisa. The ensemble’s members, all renowned musicians of the younger generation – instrumentalists and singers, already affirmed in performing Baroque music, are Monika Cerovčec, Laura Vadjon, Ana Benić, Nika Zlatarić and Pavao Mašić. As regular guests of the Festival, the Croatian Baroque Ensemble participated in the notable performance of the Acis opera and F. Händel’s Galatea G  in 2009, in production of the Dubrovnik Summer Festival, directed by Dora Ruždjak Podolski and the artistic leadership of Philip Pickett.

Last night’s concert of the Croatian Baroque Ensemble started a series of top concerts dedicated to Baroque music, which will continue tonight with the performance of the French vocal-instrumental ensemble Le Concert Spirituel, then with the Italian Concerto de’ Cavalieri on 4th August, after which performances of the Tartini Quartet, Dietery Flury with Tamas Varga and Stefan Gottfried will follow.