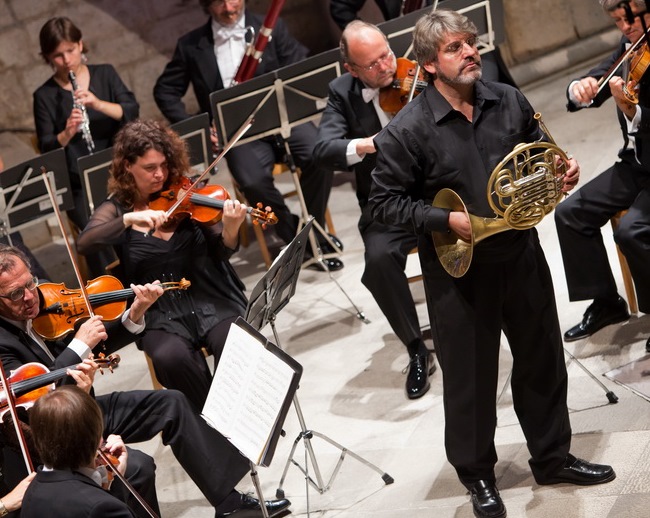 The Mozarteum String Quartet consists of skilled musicians Géza Rhomberg, Milan Radič and Marcus Pouget, led by Markus Tomasi, who is also the concert-master of the Salzburg Mozarteum Orchestra. They've performed on numerous famous festivals and world-known stages, some of which include Wigmore Hall in London, the Tchaikovsky Conservatory in Moscow, the Konzerthaus in Vienna. For almost 10 years, this quartet has had its own cycle of concerts in the Salzburg Mozarteum, and since 2006 they have been recording regularly for Oehms Classic Label. A favorite of the Festival's public, world-famous and awarded hornist Radovan Vlatković, has been performing as a soloist all over the world with the world's most notable symphonic and chamber orchestras. He often takes part on the Dubrovnik Summer Festival, and was awarded the Orlando Prize for his performance in 1998. He was a soloist with the Radio Berlin Symphonic Orchestra, conducted by Riccardo Chailly and Vladimir Ashkenazy. From 1992 to 1998, he held the post of Horn Professor at the Stuttgart Musik­hochschule, in 1998, he became Horn Professor at the Mozarteum in Salzburg, and since 2000 he has held the Horn Chair “Canon” at the “Queen So­fia” School in Madrid. Baritone Krešimir Stražanac graduated and obtained his master’s degree from the Stuttgart University of Music and Performing Arts, where he studied with Dunja Vejzović and with Cornelis Wit­thoefft at his Lied Department. As an opera singer and Lied interpreter, he perfected his skill in master classes of the legendary soprano Elisabeth Schwarzkopf and the renowned baritone Thomas Hamp­son. He first presented himself to the Festival's public last year.

In the first part of the program, the audience will have the chance to enjoy Divertimento for a string quartet and Quintet for horn, violin, 2 violas and cello in E flat major by W.A. Mozart, while in the other part of the concert, the quartet will perform the Lyrical Scene for baritone, horn and string quartet by the Croatian composer Natko Devčić, whose 100th anniversary of birth is celebrated this year. The composition was written to the lyrics of Josip Pupačić, and it is interesting that it was exactly Radovan Vlatković that performed this piece for the very first time in 1984. The last composition on the program will be the String Quartet No. 1, in D major, Op. 11 by P.I. Tchaikovsky.