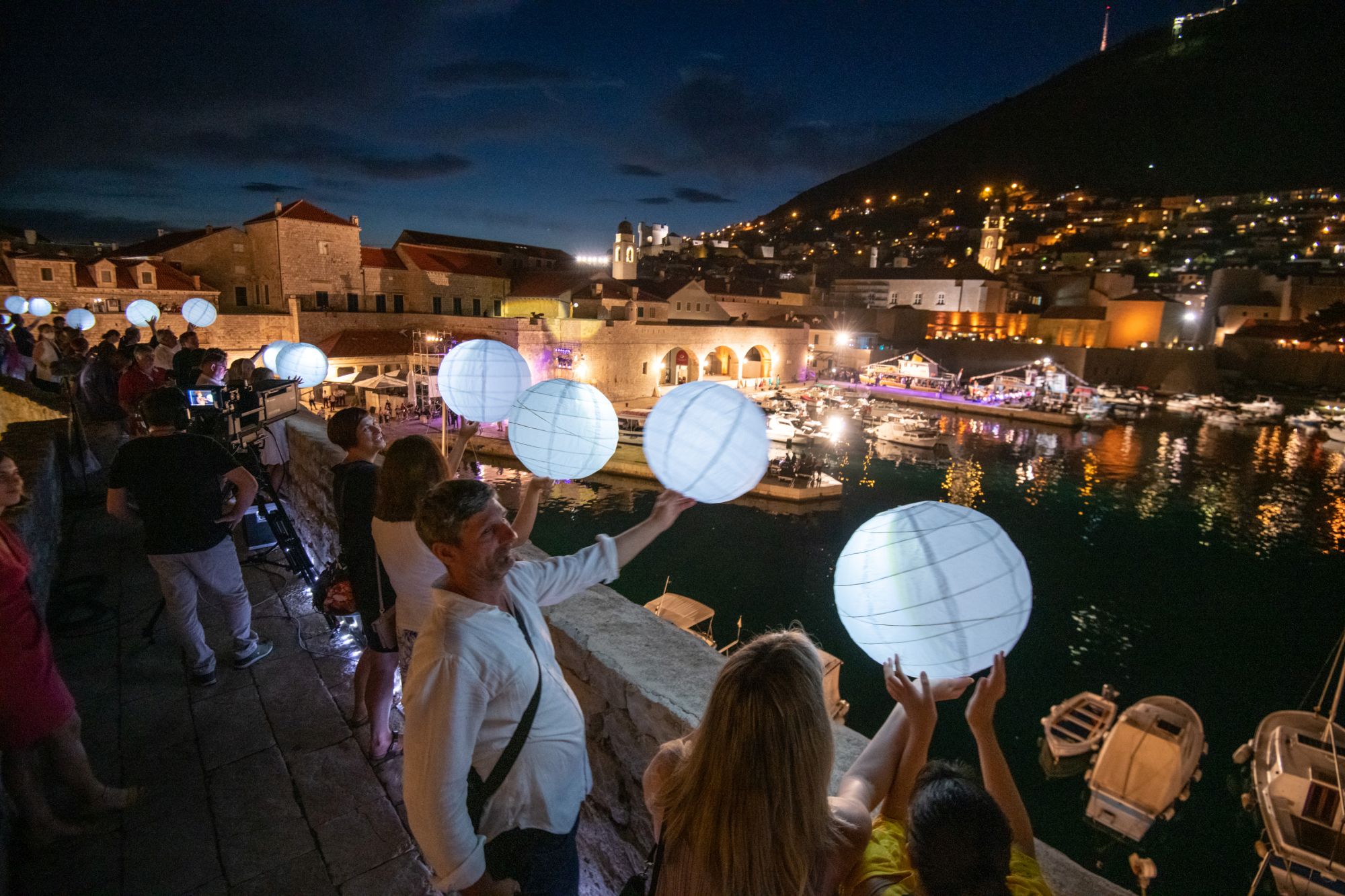 Despite the global pandemic and difficult conditions in which it was held this year, the Dubrovnik Summer Festival has successfully reached the end of its 71st season, which included nearly 50 theatre, music, dance, folklore and other programmes performed on 13 site-specific locations in Dubrovnik during 47 days, from 10 July to 25 August, it was stated at the press conference held today at the Sponza Palace, in which the media were addressed by the Croatian Minister of Culture and Media Nina Obuljen Koržinek, Mayor of Dubrovnik Mato Franković, Dubrovnik-Neretva County Prefect Nikola Dobroslavić, the Festival’s Artistic Director Dora Ruždjak Podolski and Executive Director Ivana Medo Bogdanović.

This year’s, 71st edition of the Dubrovnik Summer Festival will be remembered by strict adherence to the recommendations of the Croatian Institute of Public Health for preventing the spread of the COVID-19 disease during all Festival events and by significantly reduced budget, but also by the fact that, despite all circumstances, it was one of the few European festivals held this summer, with top artistic achievements.

The first drama premiere, performed on 20 July at Kazerma under St Mary, was ‘Mara & Kata’, a project inspired by Radio Dubrovnik’s legendary show ‘At Home with the Gossipmongers’. The play was written and directed by Saša Božić in collaboration with actresses Doris Šarić Kukuljica and Nataša Dangubić and described by the critics as ‘flawlessly performed cultural-social critique of Dubrovnik.’ Four additional performances were held due to high demand for tickets and, in addition to the eight performances at the Dubrovnik Summer Festival, this August ‘Mara & Kata’ was also performed at the KotorArt Festival in Kotor, Montenegro. 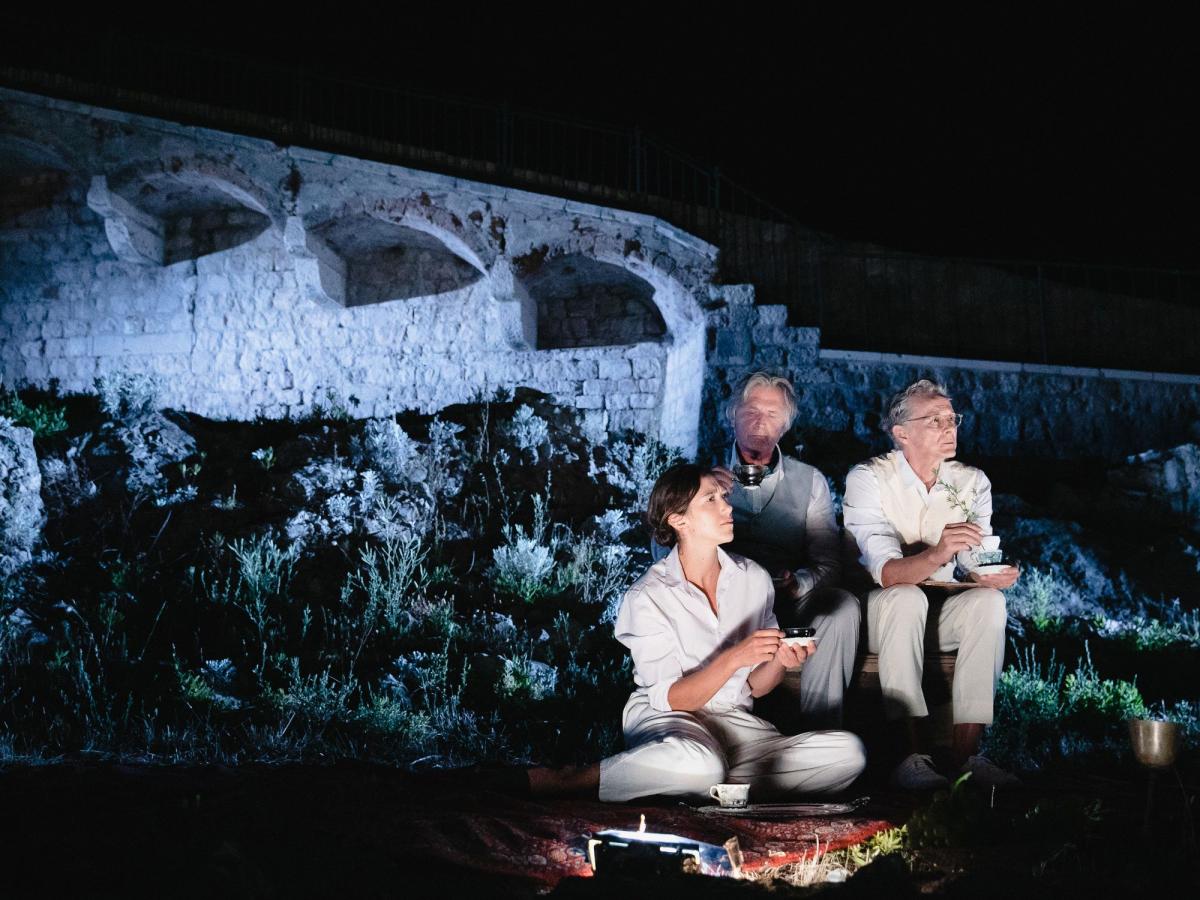 The peripatetic play ‘Mirrors of Dubrovnik – Three Sprays of Laurel, Wormwood and Heather’, directed by Dora Ruždjak Podolski and Marina Pejnović,based on the poetry of old and contemporary Dubrovnik poets by dramaturge Hrvoje Ivanković and superbly performed by the Festival Drama Ensemble, was premiered on 27 July. ‘Lavish theatre scenes followed one another during this walk from Pustijerna, evoking nostalgia over lost time,’ a critic wrote and the Festival audience approved. The play took the audience not only for a walk through time and Dubrovnik literary heritage as well as contemporary poetry and prose but also through space, through the Bokar Fort to the archaeological site Na Andriji and to Pustijerna, another location with historical ruins, which was followed by a meeting on Mrtvo Zvono Square as one of the rare ‘living’ spaces.

Marin Držić’s ‘Grižula’ was premiered in Gradac Park on 20 August. The play was directed by Saša Božić and Petra Hrašćanec and performed by the Festival Drama Ensemble, led by the excellent Ozren Grabarić as old man Grižula, in collaboration with the Zagreb Academy of Dramatic Art. Eagerly awaited by the audience, the play was created as part of the ‘Future Epics’ project co-funded by the EU Creative Europe Programme and it included collaboration between renowned Croatian actors and acting and dance students of the Zagreb Academy, who were required to learn the language of Držić’s works for the play. It was described by the critics as ‘a lively and hearty play, humorous, and most of all valuable because the actors “conquered” the complicated space in which it was performed as if they were on stage in a theatre.’ 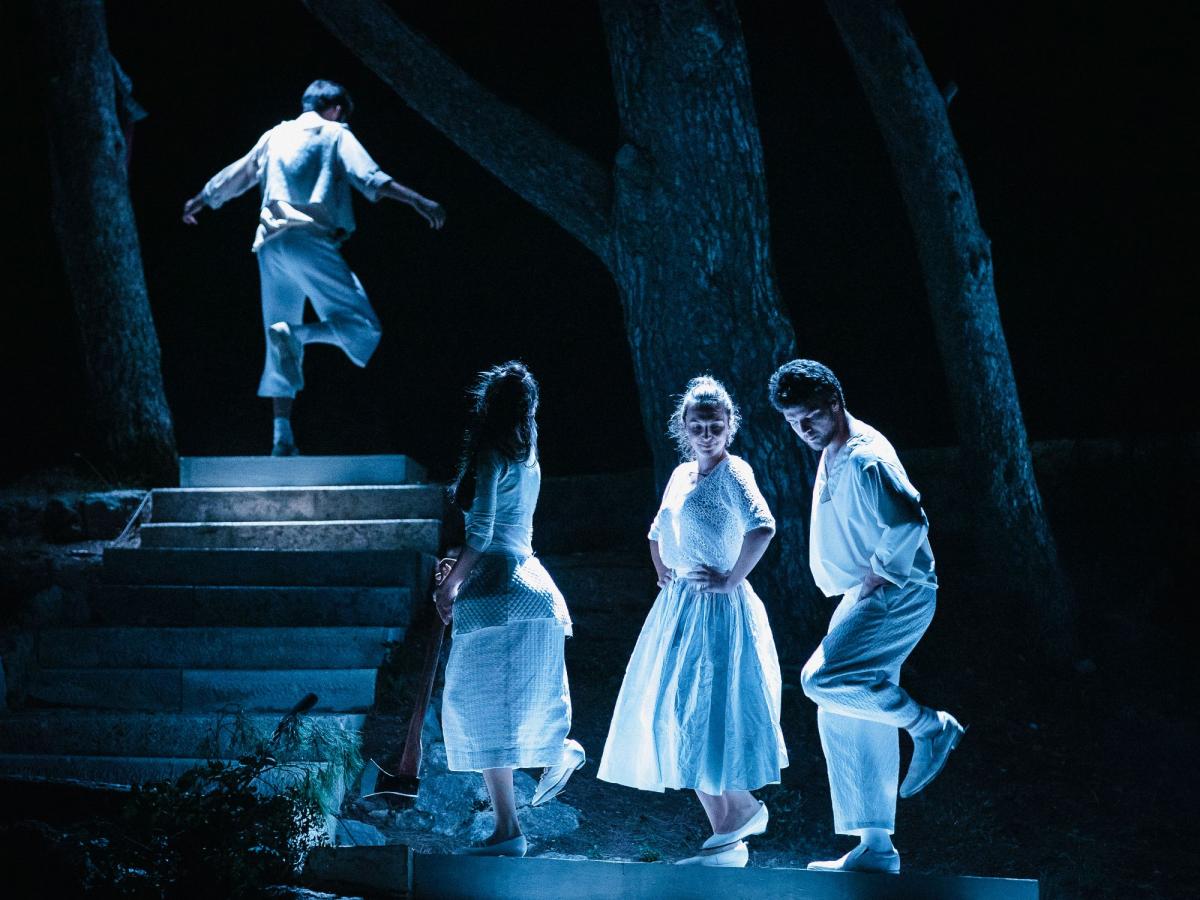 After last year’s successful productions, this year the youngest audiences enjoyed the premiere of a musical stage play ‘The Golden Book – Fairy Tales from the Dubrovnik Area’ co-produced by the Festival and Marin Držić Theatre, supported by the Caboga Stiftung Foundation and directed by Helena Petković, with original music score composed by Ivan Končić performed live by the ensemble of Dubrovnik musicians conducted by Franko Klisović. The plots, motifs and characters from three fairy tales from the collection of the same title published by the Dubrovnik Museums were intertwined to create an original and interesting fairy tale world onstage. ‘The Golden Book’ will be performed at the Marin Držić Theatre the following season, starting this autumn. 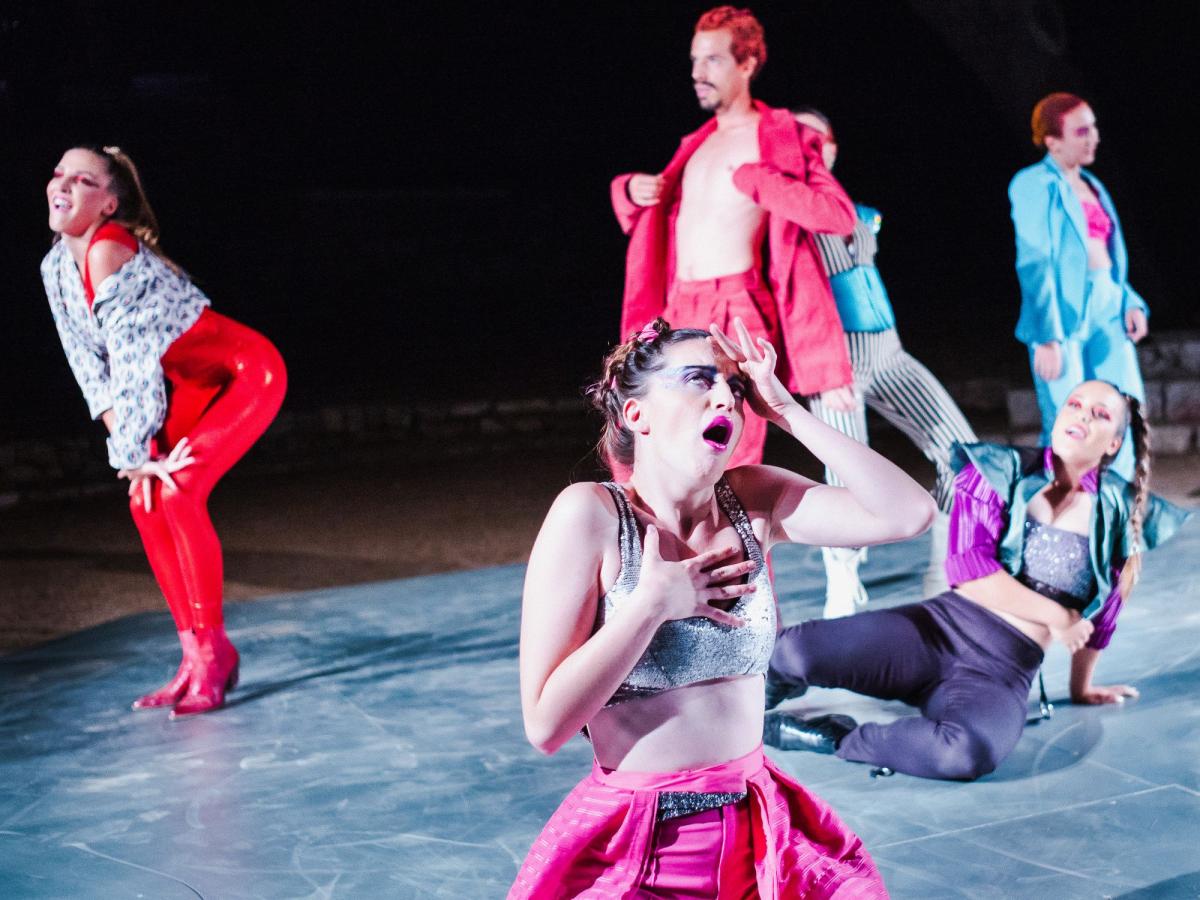 Theatre programme of the 71st Dubrovnik Summer Festival also contained numerous visiting performances, including two hit plays: ‘Three Sisters’ by Bobo Jelčić based on Chekhov, performed by the Croatian National Theatre of Zagreb Drama Ensemble and ‘Who Is Afraid of Virginia Woolf?’ of the Ulysses Theatre and Belgrade Drama Theatre, directed by Lenka Udovički, with Rade Šerbedžija who excelled in the lead role. Two productions for children and youth of the City Puppet Theatre Split were also performed at this year’s Festival: ‘Home Dwellers’ by Ana Marija Veselčić, co-produced with the Split Art Academy, and ‘Goga the Millipede’ based on Adrijana Grgičević’s text, co-produced with the Poco Loco Theatre. The Festival audience also had the opportunity to see ‘Marta and the Seven Fears’, a play about the mental health of young people produced by KunstTeatar from Zagreb. One of the interesting features of this year’s programme is the productions created as part of the European ‘Future Epics’ project; in addition to the aforementioned ‘Grižula’, the audience enjoyed the performance of the play ‘Intimacy’ authored by dramaturge Biljana Srbljanović, directed by Andrej Nosov and produced by the Heartefact Fund from Belgrade, in which actors Leon Lučev and Jelena Graovac explored whether it is possible to preserve intimacy in this time of pandemic through a series of short stories about distance, discipline, privacy and new relationships formed in the periods of (self-)isolation. Dance production ‘Embrace’ of the Vitlycke Centre for Performing Arts from Sweden was premiered as part of the same project. Dancers Meleat Fredriksson, Adam Seid Tahir and Lydia Östberg Diakité took the audience on a journey in which they embraced everything that the Scandinavian society made them throw away, related to their African origins. Dance art lovers also enjoyed the excellent dance production ‘Up and Up’ of the Zagreb Dance Company, brought by the Croatian Dance Network. 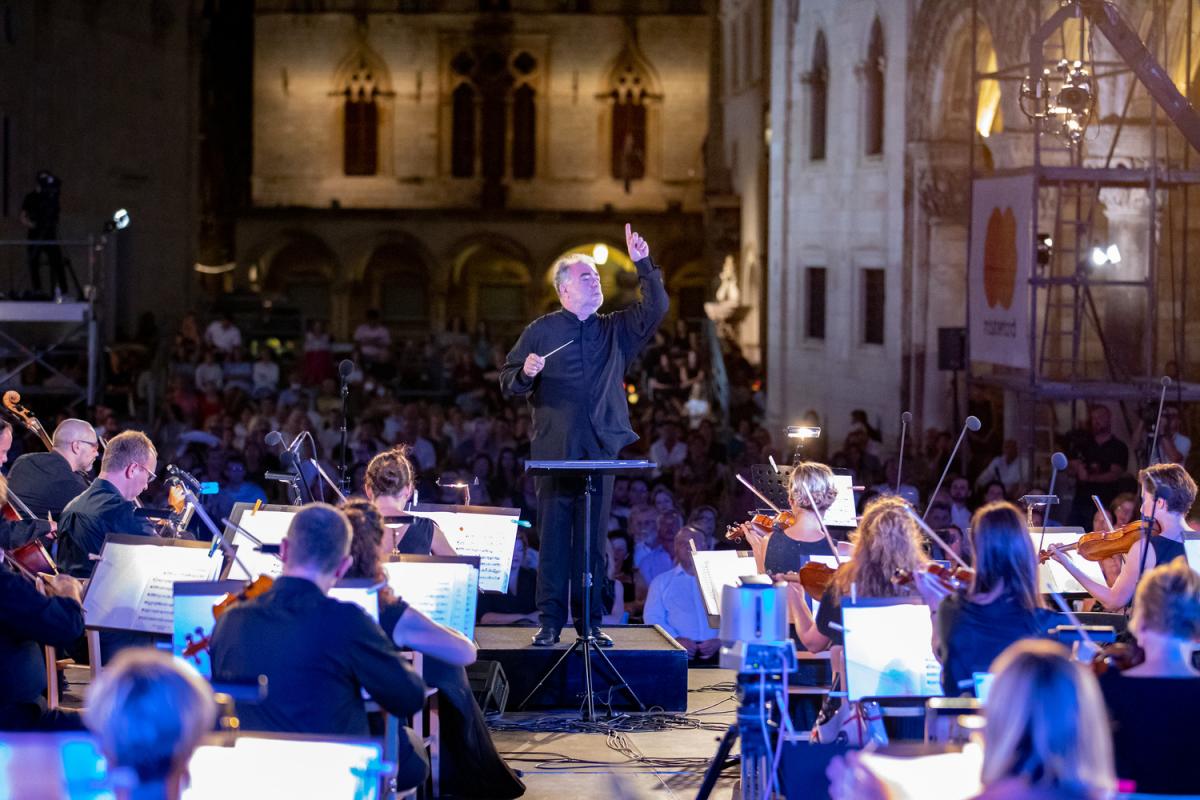 The staples of the 71st Dubrovnik Summer Festival music programme were prominent Croatian musicians, winners of prestigious international awards and competitions, and this musical journey began on 11 July in the Rector’s Palace Atrium with Aljoša Jurinić’s piano recital ‘A Monument to Beethoven’. Jurinić is one of Croatia’s most promising young musicians and last year’s winner of the Orlando Award. Dalibor Cikojević and Zrinka Ivančić Piano Duo performed Boris Papandopulo’s dance suite ‘Horoscope’ at the Rector’s Palace accompanied by percussionists Karmen Pervitić and Borna Augustinović, with participation of young dancers Viktorija Bubalo and Šimun Stankov. Trio Eusebius, the winner of the 16th Ferdo Livadić International Competition for Young Musicians, composed of violinist Eva Šulić, cellist Tonka Javorović and pianist David Vuković also gave their first, and very successful, performance at the Rector’s Palace. The critics noted that from the very beginning of their performance, the trio showed exceptional coordination, temperament, unity and refinement of every detail, which enabled them to be completely relaxed during a performance. The Dubrovnik Symphony Orchestra prepared a true musical treat with their programme celebrating the 250th anniversary of Ludwig van Beethoven’s birth in Gradac Park under the baton of young and charismatic Italian-Turkish conductor Nil Venditti, with pianist Marijan Đuzel. Internationally acclaimed artists from Dubrovnik, mezzo-soprano Janja Vuletić and guitarist Maroje Brčić gave a Mediterranean-inspired recital in the Rector’s Palace Atrium, which included the premiere of a song cycle by Zoran Juranić. The Papandopulo Quartet, composed of saxophonists Nikola Fabijanić, Goran Tudor, Goran Jurković and Tomislav Žužak delighted the audience with their performance of selected works from the ‘iron’ saxophone quartet repertory and works of contemporary Croatian composers Boris Papandopulo, Petar Obradović and Gordan Tudor. The critics praised the quartet for their ‘exceptional coordination, balanced sound and musicality, humour when necessary, and technical perfection of each member.’ The concert programme Dubrovnik on a Rock of Music with some of the best Dubrovnik musicians and exceptional soloists conducted by maestro Tomislav Fačini was a magnificent finale of the Festival’s music programme, which took place in the Rector’s Palace Atrium on 18 August, an evening in which the audience followed each performance with big applause, while the critics were full of praise and described it as a ‘glimmer of normality in abnormal times.’ 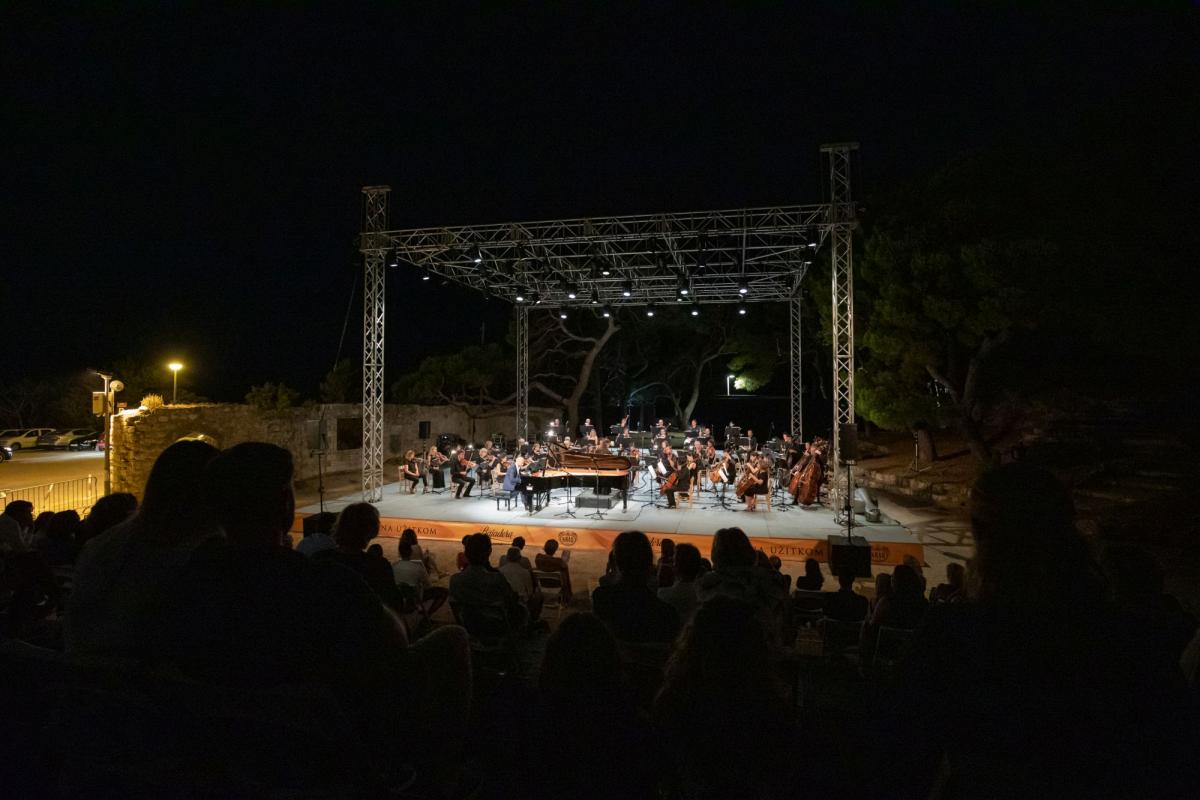 Croatia’s rich folk dance and music heritage were presented to the audience by the well known Festival participant, the Linđo Folklore Ensemble at their performances in Gradac Park, which substituted Linđo’s traditional performance venue on the terrace of Revelin Fortress due to epidemiological measures, while the FA Linđo traditional female vocal group celebrated their twentieth anniversary with a concert at the Rector’s Palace. Screening of the documentary ‘Push’ and lecture ‘Food as a Delicious Means of Persuasion’ by art historian and archaeologist Ivan Viđen at the Bunić-Kaboga Summer Villa was the result of a collaboration between the Festival and the Kinookus Association. Three exhibitions of Dubrovnik artists took place this season: Ivana Selmani’s ‘The Horizon of Reminiscence’ and Viktor Daldon’s ‘Time Out’ in Sponza Palace and Igor Hajdarhodžić’s ‘Dubrovnik is Sailing’ at the Lazareti Plateau. 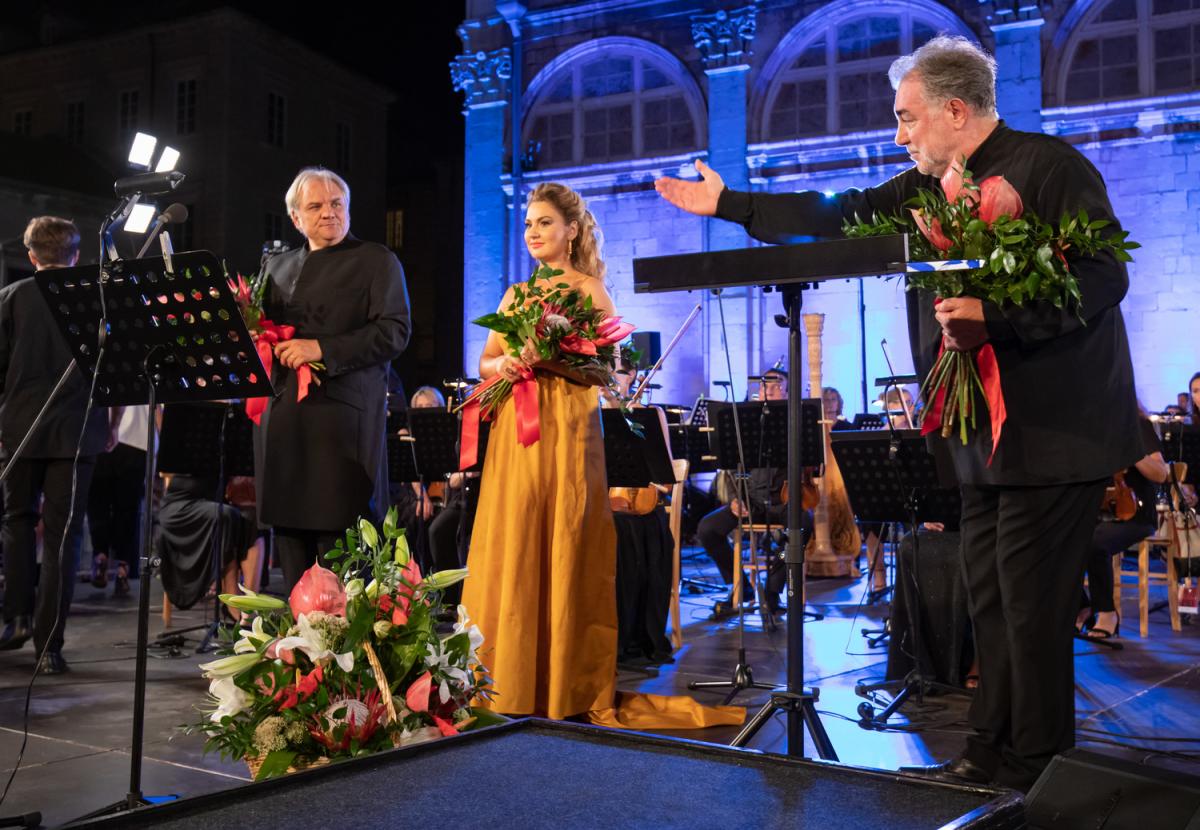 – The total budget at the end of this festival season amounts to HRK 7 million, around 60% of which are public funds and nearly 40% came from sponsors, donors and income from ticket sales, which again places the Dubrovnik Summer Festival at the very top among the European institutions with a large percentage of market income. These numbers are even more significant when circumstances of the COVID-19 pandemic are taken into account. Despite the market decline and economic uncertainty, our partners continued to support us and I would like to use this opportunity to publicly thank them once more, especially Mastercard, Caboga Stiftung, HEP, OTP Bank and the Festival’s new partner Euroherc, which is the official insurance company of the Festival as of this year. Thanks to this, the Festival’s budget was increased by 12% compared to the budget adopted in June by the Festival Council, when it amounted to a total of HRK 6,250,000. However, we must remind of the fact that the 71st Dubrovnik Summer Festival’s budget was reduced by 55% compared to the period before the coronavirus pandemic. I am proud of the entire Festival team who successfully dealt with all the challenges and complied with all epidemiological measures, for which we are continually commended by our colleagues, artists and fellow citizens. The audiences felt safe, which is why auditoriums, although capacity reduced, were full and all performances were sold out. I would also like to mention that, keeping in mind the economic circumstances, we reduced the ticket prices by 30-40% – Executive Director of the Dubrovnik Summer Festival Ivana Medo Bogdanović pointed out.

Orlando Awards for best artistic achievements of this year’s Festival were traditionally awarded before the press conference. Rade Šerbedžija won the award for best drama achievement for his role of George in ‘Who Is Afraid of Virginia Woolf?’, while composer Petar Obradović won the Orlando Award for best musical achievement. Grand Prix Orlando went to the Dubrovnik Symphony Orchestra for their overall contribution to the Festival.

The Dubrovnik Summer Festival was traditionally closed with the Croatian Radio and Television Symphony Orchestra gala concert, this year under the baton of maestro Ivo Lipanović, with the performance of opera stars, soprano Lana Kos and baritone Željko Lučić. The Closing Concert was held on 25 August in front of the Cathedral and was broadcast live by Croatian Television Channel 1. 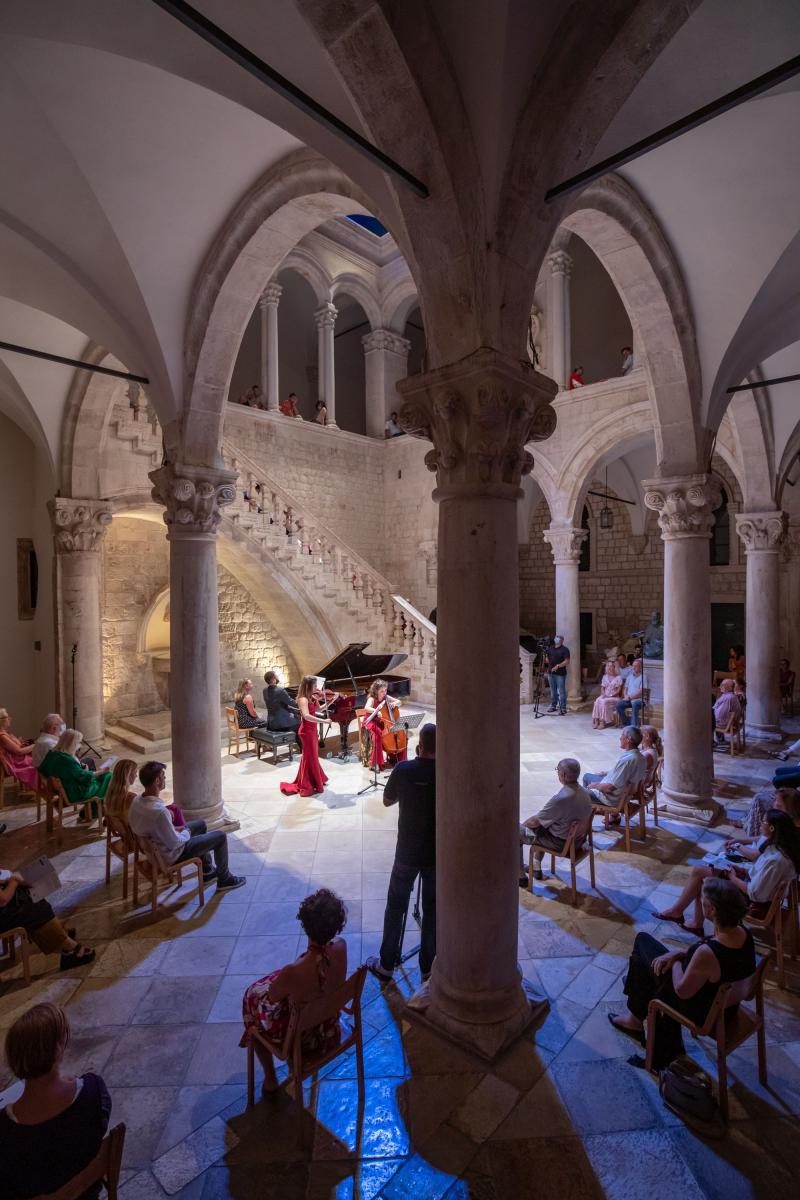