An evening of Croatian music with excellent soloists and strings 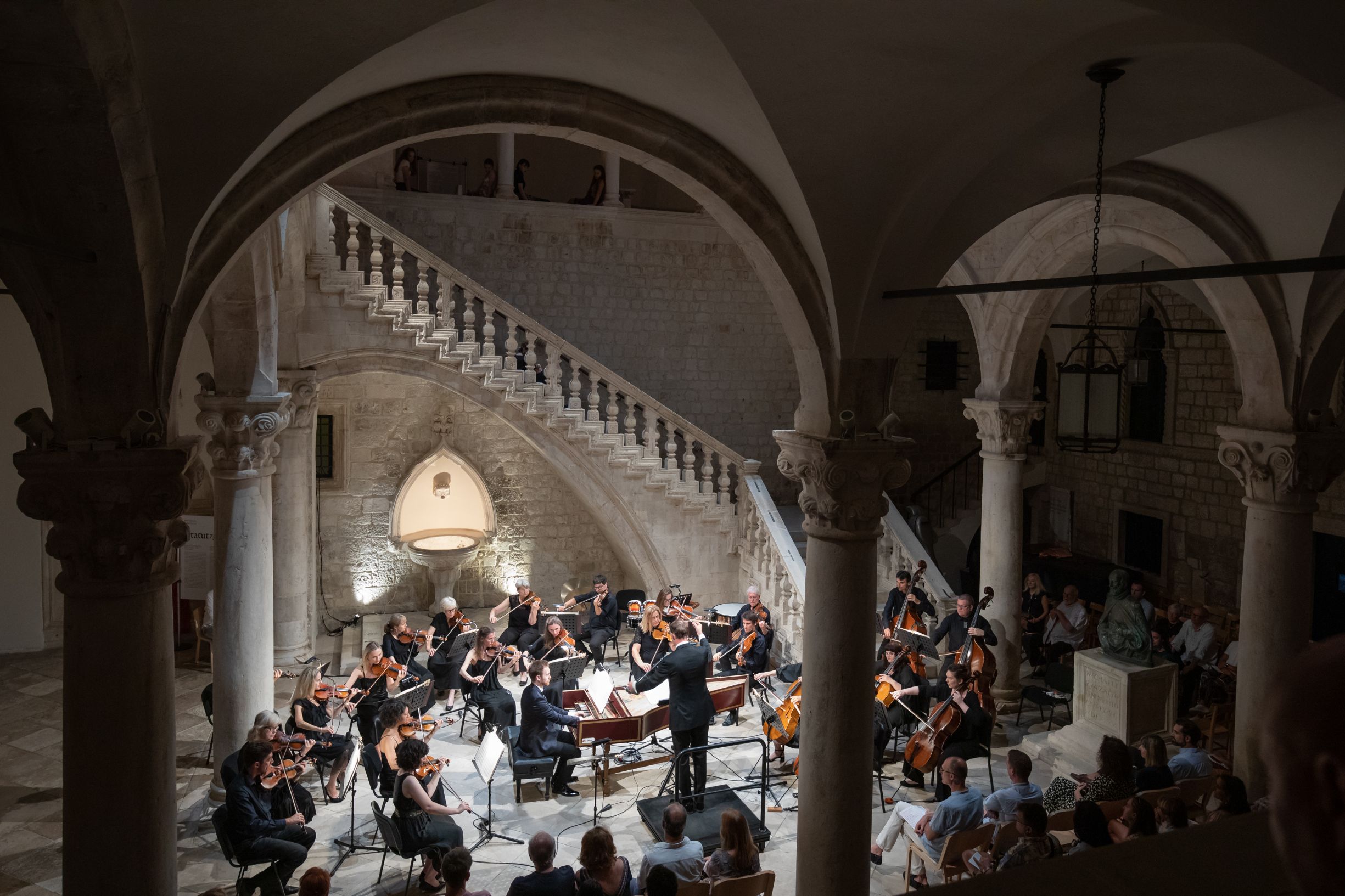 The Dubrovnik Symphony Orchestra String Chamber Ensemble with the young soloists Franjo Bilić on harpsichord and Lovro Merčep on saxophone under the baton of maestro Ivan Hut held a concert dedicated to Croatian composers last night, 14 July in the Rector’s Palace Atrium. 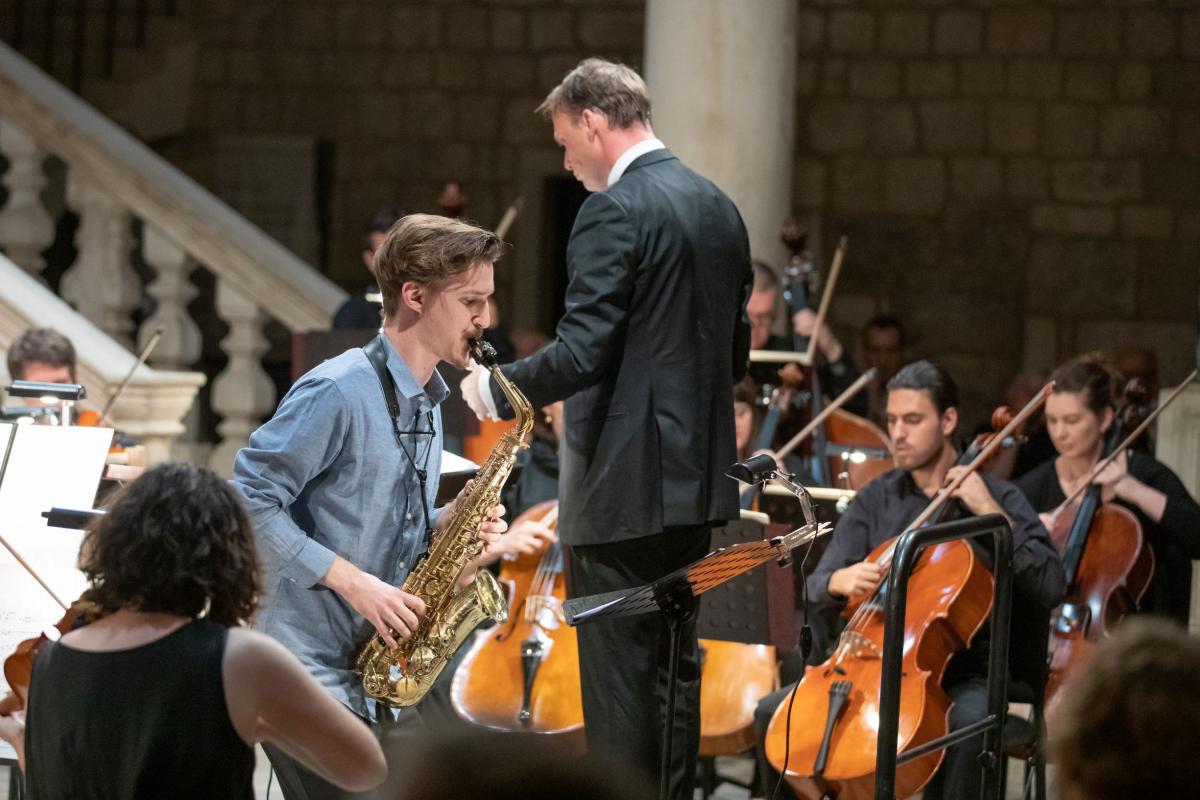 The concert was dedicated to Croatian music and for that fact aroused considerable interest from local and foreign audiences. From the very start it was set on a high artistic level with the 'psychedelic' Andantino for strings and harpsichord by Marko Ruždjak, performed by the DSO’s String Chamber Ensemble and Franjo Bilić whose excellent musicianship on the harpsichord enchanted the audience. Ruždjak's unique, refined style and intellectual approach to music are evident in Andantino, composed in 1982 for the Zagreb Soloists, with a certain ‘retro’ flair to the instrumentation and harmonics. Bilić’s calm and collected interpretation, along with the attentive reactions of the DSO’s musicians, transported the audience into a subdued oasis of musical impressions.

Following was Lovro Merčep on saxophone who introduced himself to the audience with the Sinfonietta for saxophone, strings and percussion and who also did not leave the audience indifferent, quite the contrary, he won them over with his lively performance of this colourful work by the prolific composer Bruno Bjelinski, executing even the most demanding passages with ease. The young soloists responded to the ovations with an encore, selected variations of Marin Marais's Les Folies d'Espagne, and a touch of baroque wit. After a break, the strings shined, eliciting long-lasting applause after each movement, first of Dešpalj arrangements of Bersa's Idyll and then of Papandopoulo's Sinfonietta for Strings. The oldest of the four composers from last night's repertoire is the founder of the Croatian musical Modern Blagoje Bersa, who with his knowledge, hard work and talent took Croatian music to a higher level, as evidenced by the fact that he founded the composition department at the Music Academy in Zagreb. His Idyll, according to some a movement of a would-be autobiographical symphony, was prepared for strings by the recently departed academic Pavle Dešpalj. Recognizable inventiveness and wit as well as exceptional compositional fecundity have included Boris Papandopulo among the most important Croatian composers, and his Sinfonietta for Strings, written in 1938, brings out the best in the string players, intertwining drama and emotion with meditative slowness. The insistent thunderous applause was more than earned by the String Chamber Ensemble and the ever-energetic conductor Ivan Hut, who was repeatedly called for a bow by the delighted crowd thus the maestro and the Ensemble thanked them at the end with a musical addition, Pavle Dešpalj's Longing, a composition for which Dešpalj was awarded the prestigious Croatian discography award Porin in 2002. 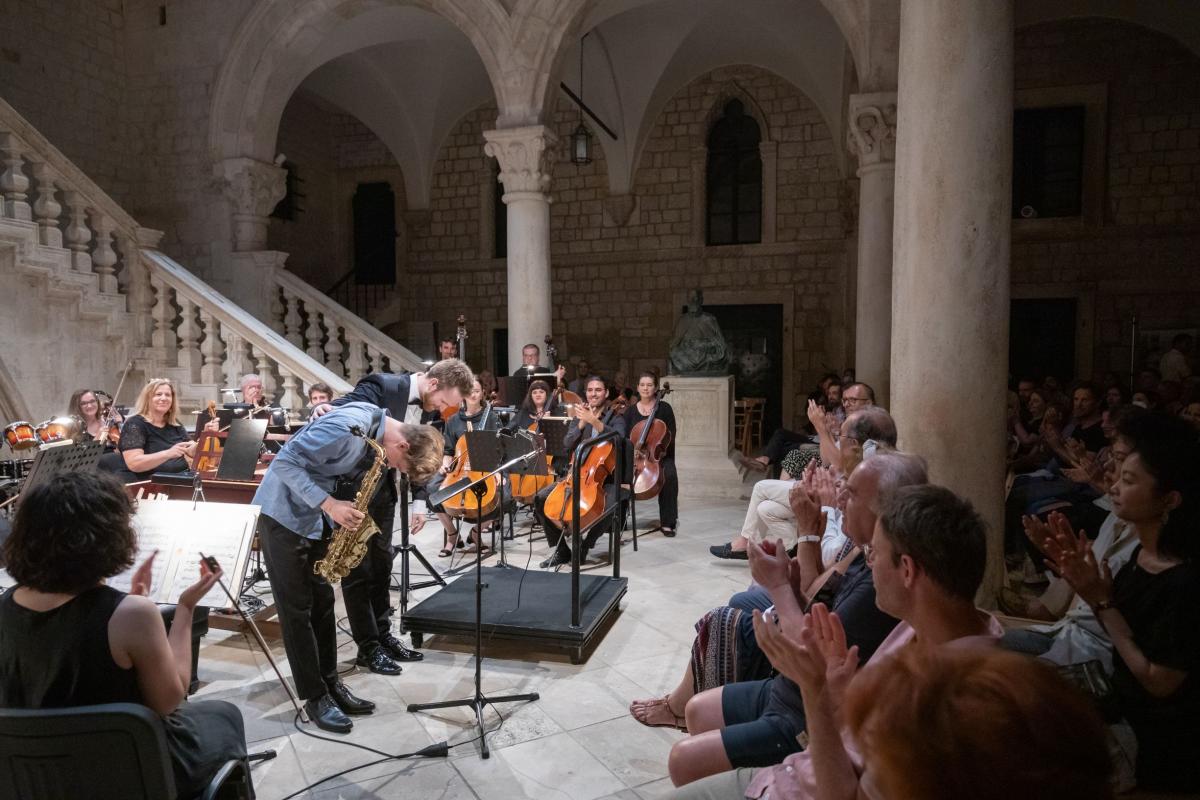 The next concert on the music programme is this Sunday, 17 July, when the sensational Cory Henry will perform in Gradac Park, with the next concert in Rector’s Palace already on Monday, 18 July, when the pianist Lovro Pogorelić will play Liszt's Transcendental Etudes in addition to Busoni's arrangement of Bach’s Chaconne.