By raising the Libertas Festival Flag accompanied by the sounds and lyrics of The Hymn of Freedom on July 10, in front of St. Blaise's Church, the  68th Dubrovnik Summer Festival was officially opened and it will be traditionally held until August 25. In 47 days, on more than 15 ambient locations, almost 2,000 artists from across the globe will present around 80 dramatic, musical, opera, ballet, folklore and other programs to 60,000 domestic and foreign guests. 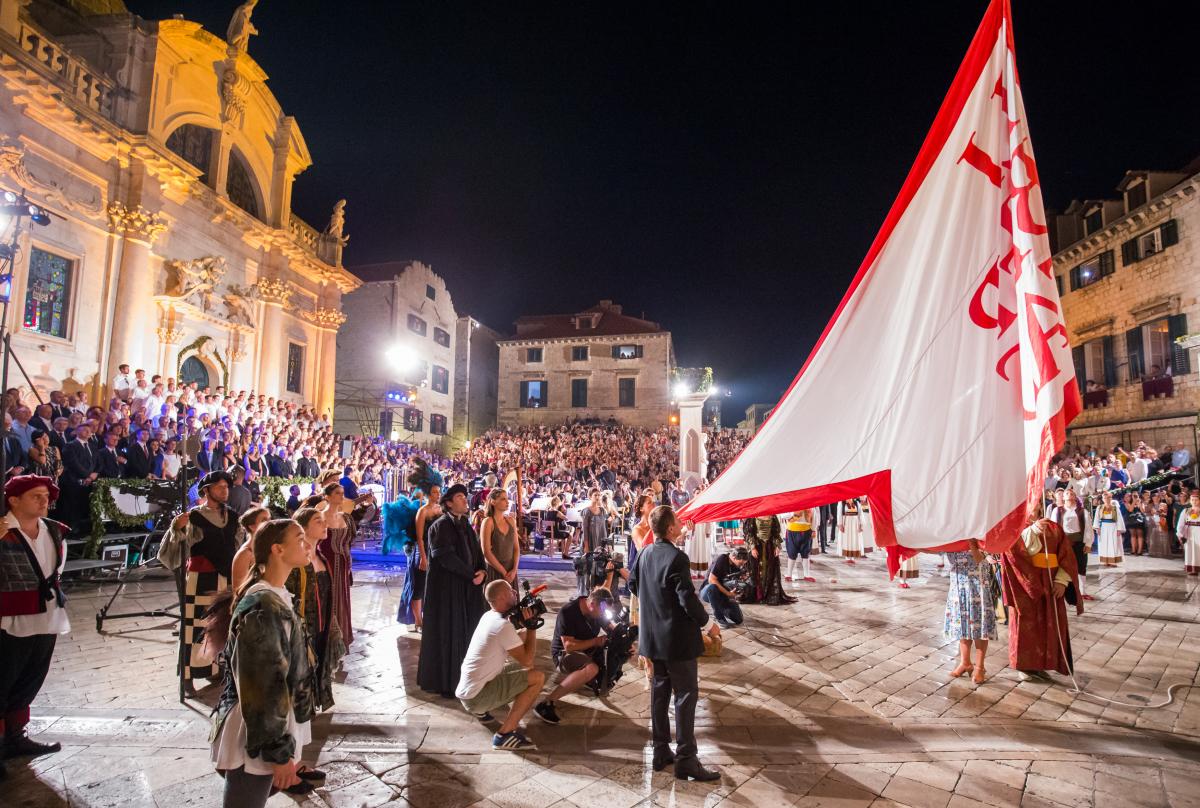 The first premiere of the 68th Dubrovnik Summer Festival is a play Messrs Glembay by Miroslav Krleža, directed by Zlatko Sviben, which will take place at the Modern Art Museum of Dubrovnik. That will be the first time this play is being staged at the Festival. The excellent acting ensemble is led by Predrag Ejdus as Ignjat Glembaj, Anja Šovagović Despot as Baroness Castelli and Mijo Jurišić in the role of Leone. In the second Festival's premiere, Hrvoje Ivanković depicts Držić’s dispute with the Dubrovnik Republic on the basis of numerous existing documents and anecdotes. By combining Držić’s biographical data and fragments from his numerous comedies and pastoral plays, Ivanković creates a special kind of glossary of their present-day meaning. The play Marin Držić - Victory Over The Enemies commemorating the 450th anniversary of Držić’s death will be directed by Ivica Boban. Young performers and more experienced actors are led by Doris Šarić Kukuljica and Maro Martinović, while Marin Držić and a series of his emblematic characters from Pomet and Negromant to Stanko and Skup are played by the most prominent Croatian Actors of the younger generation such as Ozren Grabarić.

Last year's hit plays La bottega del caffè and Othello - which enthralled critics and the Festival's audience alike, and for which people requested extra tickets - will be part of this summer's repertoire again. Translated and adapted by Frano Čale, Carlo Goldoni's La bottega del caffè is one of the legendary plays from the Festival's golden age. Last year's staging of this play in the form of a comedy with song and dance, directed by Vinko Brešan and performed by the Festival Drama Ensemble, attracted more than 4.000 visitors. An additional performance was shown, and the tickets were sold out many days in advance. William Shakespeare's Othello – translated by Vladimir Gerić, directed by Ivica Boban and performed by the Festival Drama Ensemble on Fort Lovrjenac – was also warmly received by both audiences and critics, who wrote: „The play worthy of its glory, the present day, and the crowded auditorium“, …„Dubrovnik's Othello was entirely made of unbribable emotions. The outstanding drama ensemble was headed by Dragan Despot in the role of Othello, Rakan Rushaidat in the role of Iago, and Anja Đurinović in the role of Desdemona. The entire ensemble was awarded the Orlando Award for the best play, while Ivica Boban was awarded the Croatian Theatre Award for the best direction in the current Croatian theatrical season. Guest performances will include the Croatian National Theatre of Zagreb last year's hit play by Tena Štivičić, Three Winters, directed by Ivica Buljan at Gradac Park. The play was first performed in London with great success, won the prestigious Susan Smith Blackburn Prize in New York, and became a major hit at the Croatian National Theatre of Zagreb.

The music and stage programme will include a premiere of Händel's Orlando, featuring David Bates, Artistic Director, Janusz Sikora, Director, the Croatian Baroque Ensemble, and the soloists: Owen Willetts, Ivana Lazar, Renata Pokupić, Marija Kuhar Šoša and David Oštrek. Ballet lovers will have the opportunity to enjoy the most popular „white ballet“ of all times and a synonym of classical ballet art, Tchaikovsky's Swan Lake, choreographed by the famous Vladimir Malakhov and produced by the Croatian National Theatre of Zagreb. Guest performing is also the Bitef Theatre and their dance group which will perform Birds inspired by Aristophanese, choreographed by Edward Clug.

The Festival's rich music programme was opened in front of St. Blaise's Church by Carl Orff's Carmina Burana performed by the Dubrovnik Symphony Orchestra, the Zagreb Philharmonic, the Ivan Goran Kovačić Academic Choir, soloists Nicola Proksch, Owen Willets and Nikola Mijailović and conductor Ivan Josip Skender. The Dubrovnik Symphony Orchestra will have two concerts in the Atrium of the Rector's Palace with guest conductors and soloists in August, and the performance of the program Forgotten Music will mark the 80th anniversary of the birth of the great Croatian contemporary composer, Dubravko Detoni and the premiere will be the Bird Concerto by the composer Petar Obradović. Pianist Goran Filipec prepared an evening dedicated to Franz Liszt carefully selecting compositions from his late opus in which Liszt sought the limits of freedom of the music, announcing new times. The program titled Key to the Future, featuring young virtuosos, laureates of prestigious international competitions, will continue this year and will be opened by finalist of the Chopin and Queen Elisabeth competitions Dmitri Šiškin. The programe will also feature Lukáš Vondráček, the winner of the Queen Elisabeth competition. Croatia will be worthy to present in this program our most prominent young generation guitar player Srđan Bulat. Guitarists Zoran Dukić, Petrit Çeku, Tvrtko Sarić and Maroje Brčić will also be greeted by the audience as 4 guitars.

The Italian ensemble Umberto Giordano will present a program dedicated to Ludwig van Beethoven, and a recital inspired by the Middle Ages in Parisian salons from the beginning of the 20th century, performed by the Dialogos Ensemble consisting of Catherine Livljanić and Danijel Detoni. Numerous other recitals in the Rector's Palace have been planned: a concert by cellist Monika Leskovar and guitarist Petrit Ceku, violinist Aleksander Milosev and pianist Lovro Pogorelić, while a special violin recital will be performed by Stefan Milenković with pianist Rohan de Silva. The chamber ensemble Synergia 6 whose member is the world famous violinist Nemanja Radulović will also perform in the Rector's Palace. At the same venue, the festival audience will be able to hear one of the most interesting interpreters of sevdah today Božo Vrećo. Young and multiple award-winning musicians Filip Merčep and Nicolas Sinković will produce a digital project called Dialogue, percussion with electronics, and interactively with the audience, studying, as the title suggests, the dialogue between contemporary art and the city's scenes. At the end of the festival, another musical treat awaits - a concert at Revelin Fort Terrace, one of the most prominent British female jazz vocalists, Zara McFarlane. The Festival will be closed on August 25 in front of St. Blaise's Church by the Symphony Orchestra of the Croatian Radio Television, which will be directed by Alberto Veronesi. The last year's winner of the Orlando Award, Ukrainian violinist Alexey Semenenko will also perform at the concert.

An integral part of the 68th festival program are the traditional performances of the Folklore Ensemble Linđo on Revelin Fort Terrace, which include premiere performances this summer. The festival audience will also have the opportunity to take a look at the last premiere title of the Student Theater Lero, a performance of the City of Shadow directed by Davor Mojaš. At the 57th Croatian Amateur Theater Festival, they won the Best Performance Award. Ivica Kunčević'sThe Miser will also be performed at the festival by Marin Držić Theater Productions. The accompanying program for the festival audience brings the selection of the best films from the Pula Film Festival including the winner of the Golden Gate award. An exceptionally rich show program brings a great exhibition of Antun Masle on the occasion of the fiftieth anniversary of his death, where will be presented some of his never-before-seen works. Sponza also hosts the exhibition of Nikolina ŠimunovićOne Summer in the City and a photography exhibit by Aljoša Rebolj Sculptured Time dedicated to the theater work of Tomaž Pandur, while the exhibition of sculpture by Jagoda BuićScherzo will be set upin Sveti Stjepan at Pustijerna. The program Festival features writers, according to the concept by Mani Gotovac, will be opened by Tereza Kesovija who will interpret Croatian poets accompanied by piano, guitar and violin. As part of this program, the stage drama of Everest by Drago Glamuzina and My Brilliant Friend by Elena Ferrante are also planned. The festival also features the premiere projection of the Croatian radio television documentary series Stories About One-Offs (Dubrovnik’s ‘originals’, bohemians, eccentrics and other one-of-a-kind people) by screenplay writer and editor Vedran Benić. In co-operation with Art Workshop Lazareti the latest title of Darko Lukić, phd., Introduction to Applied Theatre: Who Owns the Theatre? and Ivica Kunčević'sDirector's Notes published by the Croatian ITI Center will also be presented to the festival audience. On the occasion of fifty years of priesthood celebrated by the cathedral pastor father Stanko Lasić, his book Writings and Memories of a Parish Priest will also be presented at the Festival. This year's program also features a monograph presentation on the occasion of the 40th Anniversary of Orlando Award published by the Croatian Radiotelevision.