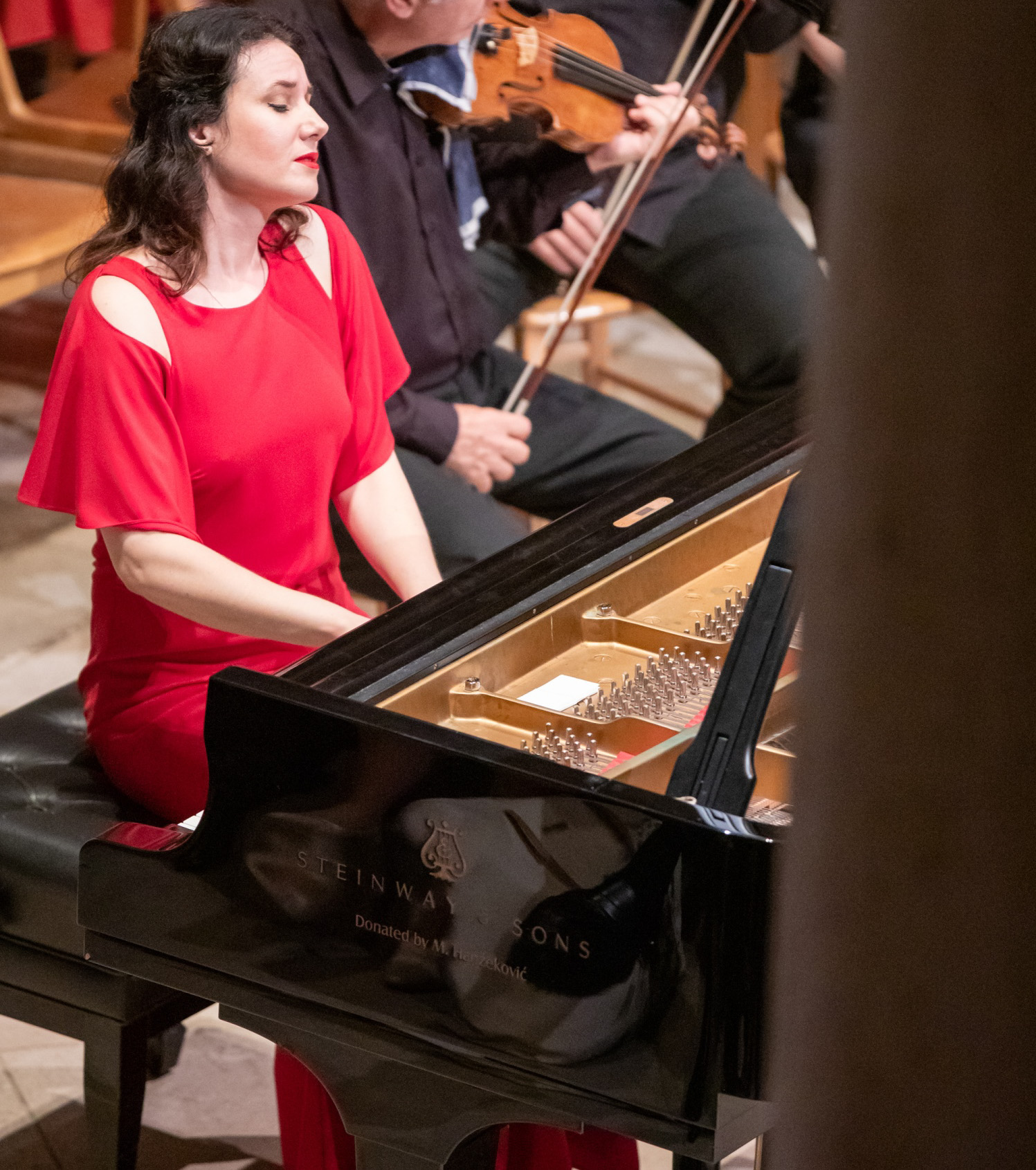 Pianist Martina Filjak along with Felix Klieser on horn and Andrej Bielow on violin will hold a concert on Thursday 12 August in the Rector’s Palace atrium at 9.30pm. On the programme are pieces for piano, horn and violin by Duvernoy, Schumann, Dukas, Wieniawski and Brahms.

The evening of music as performed by the trio of top European musicians will include a select repertoire of piano, horn and violin pieces with the Trio Nr. 1 for Piano, Horn and Violin in c- minor opening the concert. Composed by the horn music pioneer Frédéric Duvernoy, Trio No.1 is a lively composition influenced by the Vienna classic. Next is Robert Schumann’s Adagio and Allegro op. 70 for Horn and Piano which calls for master musicianship and use of the entire instrument range. Also requiring great musical ability is Paul Dukas’ Villanelle for Horn and Piano which was written as an exam piece for horn students at the Paris Conservatory with numerous technical challenges but spirited melodies. Polish composer and one of the best violinists of his time Henryk Wieniawski himself studied at the Parisian Conservatory and his five-part Faust Fantasy op. 20 will be performed, each part bringing a different mood and concluding in a virtuosic finale. To round off the evening the trio will play Johannes Brahms’ Trio for Horn, Violin and Piano in E flat Major, Op.40, a composition interpreted by music experts as a farewell lament for his late mother and which holds great importance for its novel choice of instruments for the time, it is believed that this Trio has practically started a new kind of music.

Festival favorite Martina Filjak performs as soloist and with leading orchestra and conductors on renowned stages of esteemed concert halls around the world. She received her music education at the Zagreb Academy of Music, the Vienna Conservatory and in the well-known soloist programme in Hanover. Filjak won first prize and a number of special awards at the respected Cleveland International Piano Competition, which was soon followed by her debut at the Konzerthaus Berlin, the Musikverein Vienna and Carnegie Hall’s Zankel Hall, on the occasion of which her performance was highly praised by The New York Times. Moreover, the acclaimed pianist is also the recipient of highest national musical awards Vladimir Nazor, Milka Trnina and the Dubrovnik Summer Festival’s Orlando award in 2008. Felix Klieser, horn player with whom Filjak will be sharing the stage on Thursday, is an exceptional artist in many aspects, winner of the ECHO Classic prize in the category best young artist and the prestigious Leonard Bernstein Award of the Schleswig-Holstein Musik Festival. Violinist Andrej Bielow is a leading Ukrainian musicians of his generations who has, as a soloist and chamber musician, recorded over 20 albums, collaborated with esteemed international orchestras under the baton of first-rate conductors and has won various awards and prizes. He teaches at the University of Arts in Graz and is a regular visiting teacher at the Royal Academy of Music in London. He regularly gives masterclasses in Europe, Asia and USA. This is the trio’s first performance together in Croatia, and this autumn they will be debuting for German and Swiss audiences.