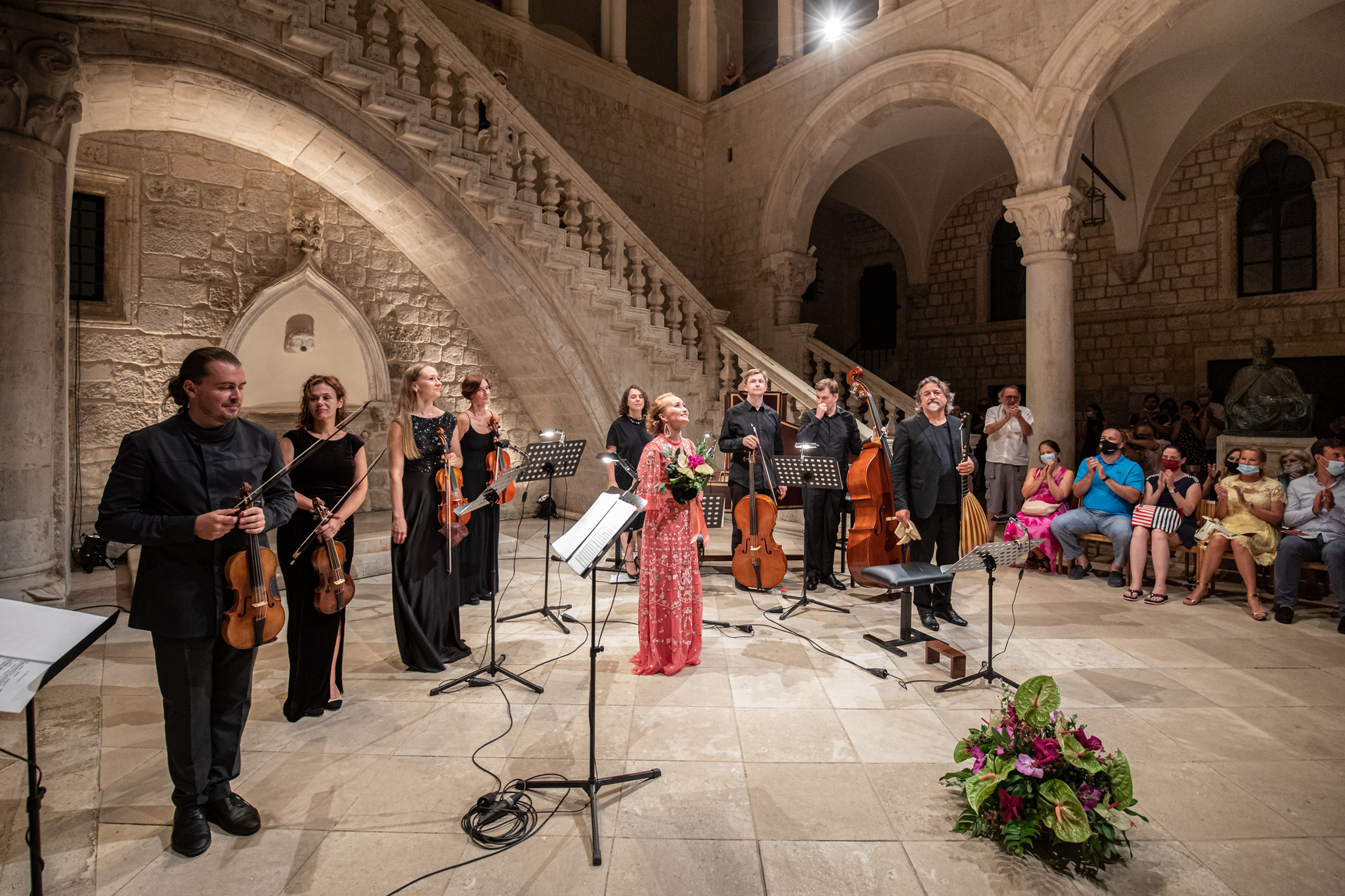 As part of the music programme of the 72nd Dubrovnik Summer Festival, last night, 25 July in the Rector’s Palace atrium one of the leading voices of her generation, young soprano Julia Lezhneva and the renowned La Voce Strumentale Ensemble led by violinist and conductor Dmitry Sinkovsky with Luca Pianca on lute performed choice repertoire of best 18th century opera composers, surpassing all expectations of the audience at this highly anticipated event. 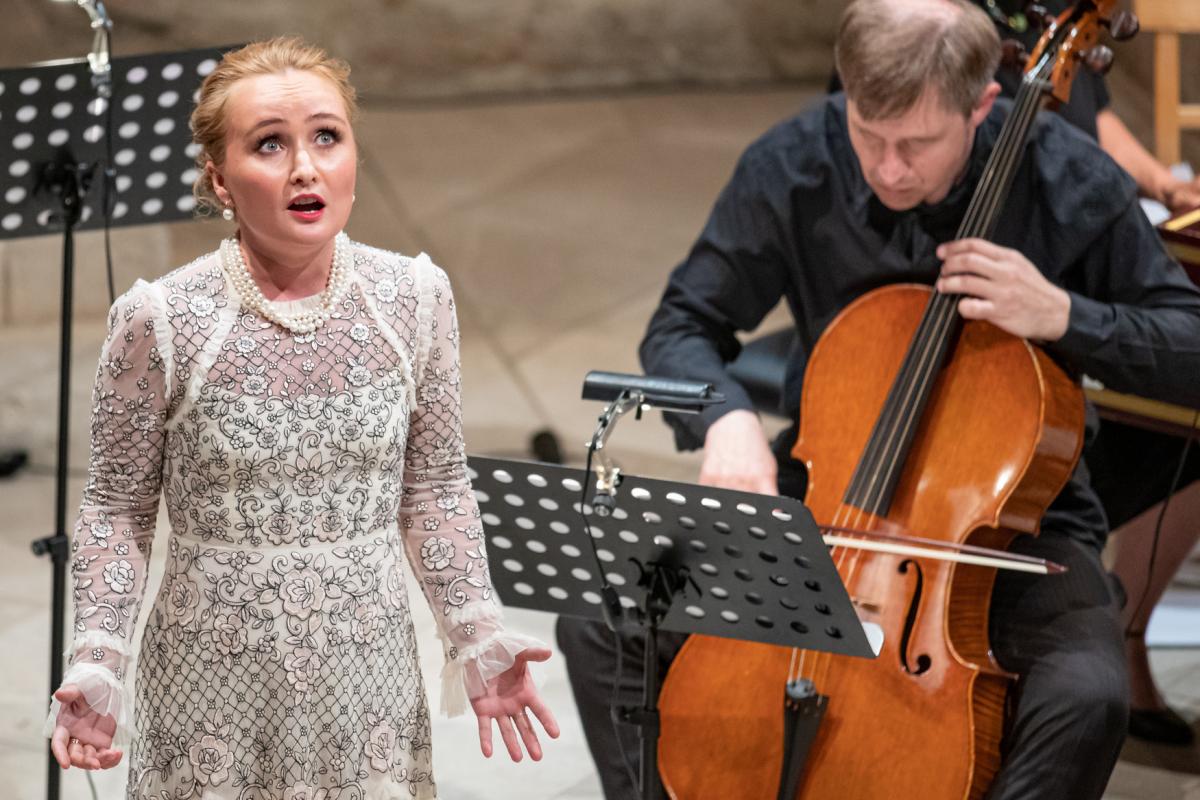 Local and foreign crowds at the Rector’s Palace were enchanted by the bravura vocal performance by the angelic Lezhneva and the masterful musicianship of the harmonious La Voce Strumentale – Maria Krestinskaya and Elena Davidova on violins, Meri Skejic Drobac viola, Igor Bobovich cello, Leonid Bakulin double-bass and Elizaveta Miller on harpsichord – with Luca Pianca on lute playing flawlessly clear and bright timbres, their every piece performed followed by vigorous applause. A lively presence, communicating cheerfully with the audience and the Ensemble, Dmitry Sinkovsky with his playfulness and energy complimented perfectly the gentle yet intensely dramatic Lezhneva, even joining her in song with his impressive counter-tenor to the utter delight of every concertgoer. Thus it is not surprising that the applause for the virtuosos lasted several minutes, with a standing ovation to end the unforgettable concert. Neither musicians nor the audience wanted the magical musical evening to end – Lezhneva, Sinkovsky and La Voce Strumentale were called to encore four times, to roaring claps and cheers echoing through the pale stone atrium of the Rector’s Palace. 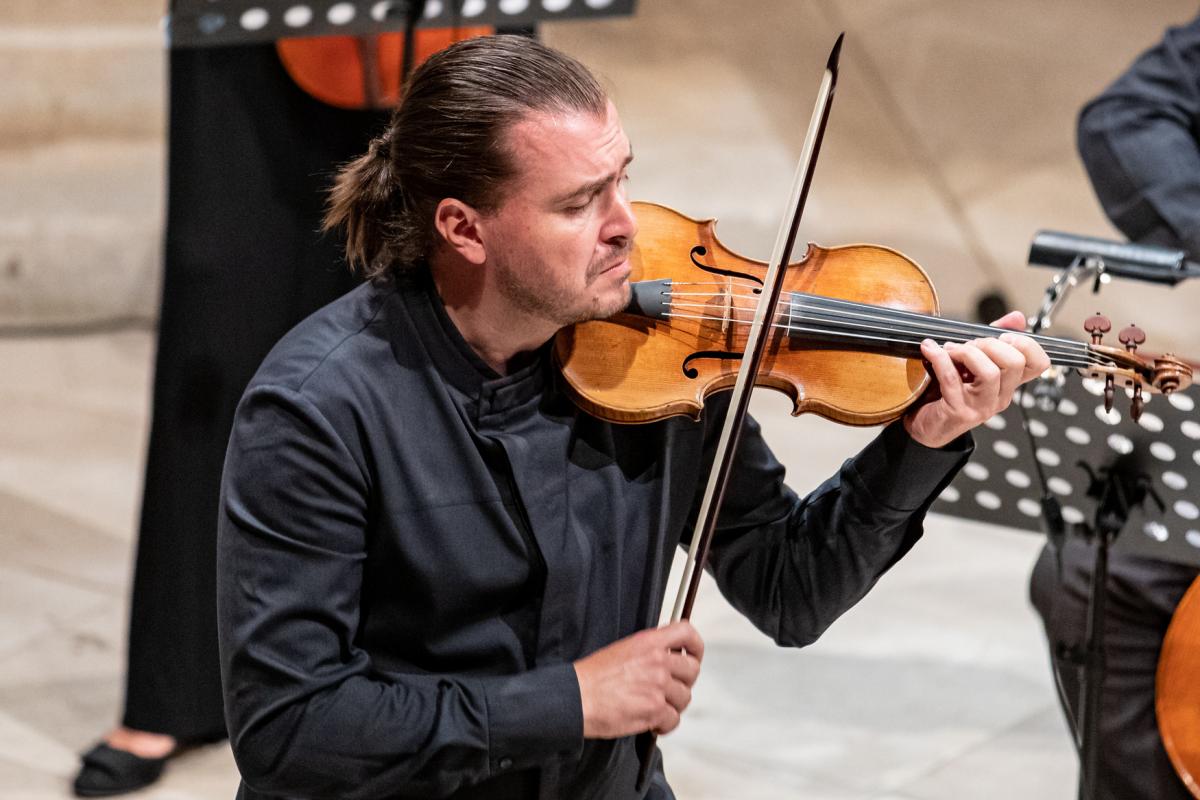 All the splendour of the 18th century came to life through the choice evening programme of Telemann’s Violin Concerto in B-flat major ('Pisendel Concerto'), Porpora’s  Like a ship amidst the waves aria from Siface, Without you, my love - Volumnia's aria from Graun’s Coriolano, Vivaldi’s

Concerto for lute, strings and basso continuo with Luca Pianca on lute and his two arias I am a scorned bride and Battered by two winds, Irene's aria from Bajazet and an aria from La Griselda respectively. Also performed were Richter’s Adagio and Fugue in G minor for strings and basso continuo, Vivaldi’s Whispering little zephyrs aria sung by Hippolyte from Ercole sul Termodonte,

Händel’s A thought, the enemy of peace from oratorio The Triumph of Time and Disillusionment, more Vivaldi – Violin Concerto in D minor ('Per Pisendel') with Dmitry Sinkovsky on violin, then again Graun with Postumio's aria from Silla No, no, neither the sands of Libya and Händel Rossane's aria from Alessandro In my soul shines. In their four brilliant encores, Sinkovsky, La Voce Strumentale and Lezhneva included Vivo in te from Händel’s Tamerlano, Lascia la spina from The Triumph of Time and Disillusionment oratorio and aria Cara speme from his Giulio Cesare opera with Porpora’s Alleluia to conclude the spectacular concert. 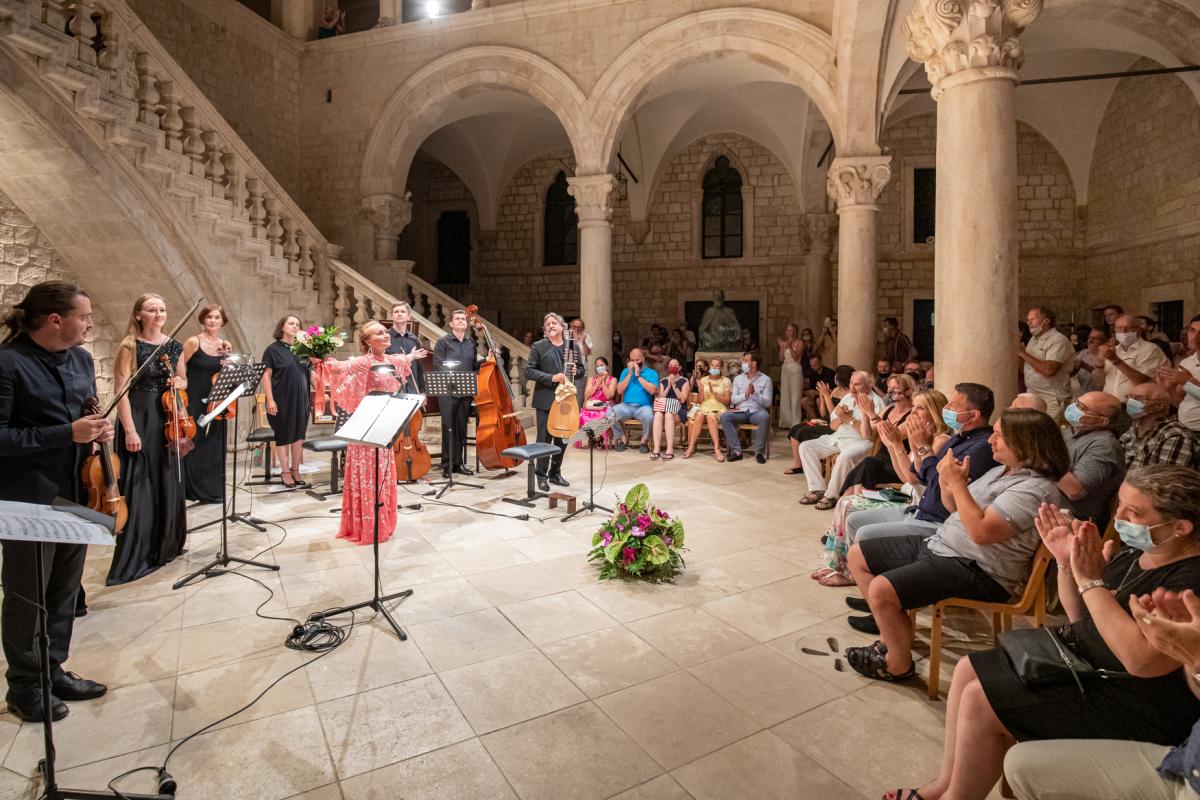 The next concert on the rich Festival music programme is on Thursday 29 July when the Rector’s Palace will host the Dubrovnik Symphony Orchestra String Chamber Ensemble and with Eva Šulić on violin, under the baton of maestro Ivan Hut, performing Ástor Piazzolla’s Cuatro Estaciones Porteñas, or The Four Seasons of Buenos Aires.

Tickets for the concert and all other programmes are available for purchase at the Dubrovnik Summer Festival website www.dubrovnik-festival.hr or via www.ulaznice.hr ticketing service, and at the box office of the Festival Palace (Od Sigurate 1) every day from 9am to 9.30pm. Tickets will also be available on location two hours before the start of the performance. Ticket prices remain significantly reduced due to the economic situation being impacted by the pandemic, up to 50% lower as was the case last year. Purchases made with Mastercard® and Maestro® cards receive a 10% discount while all purchases and orders over 500HRK offer payment in instalments.