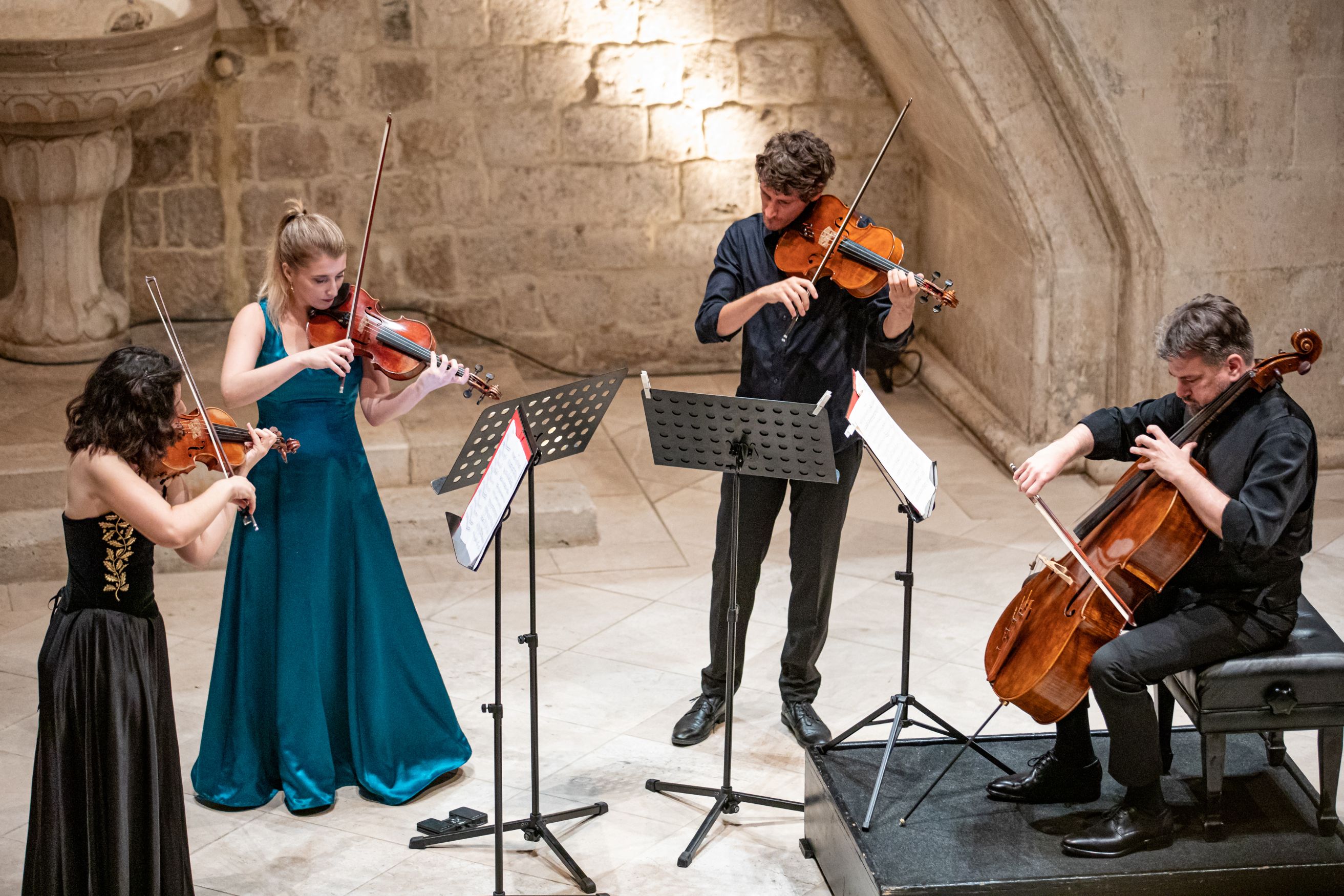 Violinists Đana Kahriman, Eva Šulić and Šimun Končić with cellist Pavle Zajcev had their first performance as a string chamber ensemble, under the name kvARTet, last night 3 August in the Rector’s Palace atrium. Their debut was triumphant, judging by the delight of the audience who enjoyed the evening’s excellent repertoire of Beethoven and Dvořák string quartets. 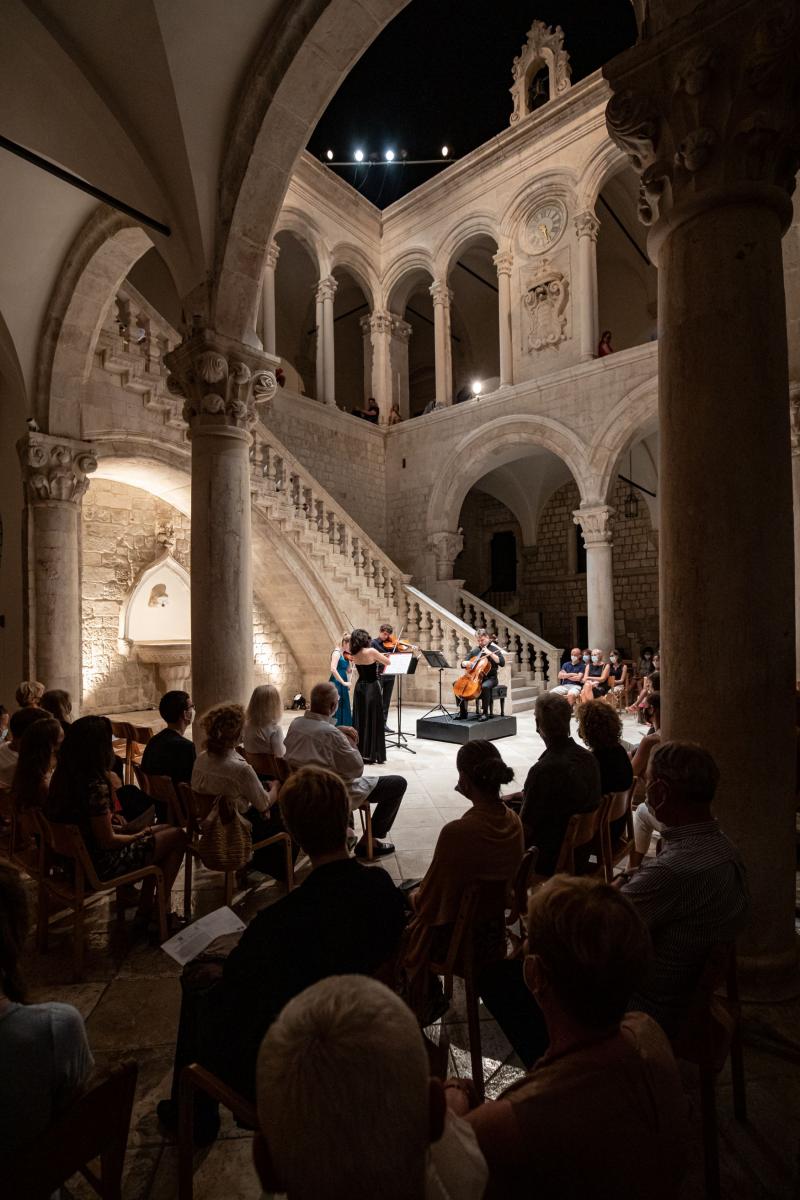 In the first part of the contrasting yet harmonious programme, kvARTet performed Ludwig van Beethoven’s String Quartet No. 7 in F Major, the first of three in his Rasumovsky cycle of string quartets. Even though these quartets are some of Beethoven’s most popular works which impress today with their “symphonic” manner, at first they were met with opposition from Beethoven’s contemporaries but the composer did not intend them to be easy listening or easy to play oscillating intense emotions and requiring great technical prowess. To bring to life such a complex, monumental even, piece is no easy task for experienced ensembles yet kvARTet chose to be bold in their selection – demonstrating in the end individual virtuosity and perfect consonance as an ensemble. The complimentary playful late-Romantic charm came through Antonin Dvořák’s String Quartet in F major, nicknamed “the American Quartet”. At the end of 19th century, Dvořák found himself sojourning to the States, ending up in the picturesquely pastoral Spillville, Ohio and finding the idyll there to be inspiring, along with the uniquely American cultural collage. Thus was written his shortest and simplest chamber piece. Playing its bright and light notes which in one movement imitate bird song, the quartet was a breath of fresh evening air. The audience welcomed their triumph with thunderous applause and ecstatic exclamations, musicians bowing some five times even, and then as a thank you to the Festival crowd playing two musical additions – Orientale, one of five Novelettes by the great Russian composer Glazunov, which underscored the folk spirit of the earlier programme. They also played Longing, by Pavle Dešpalj, a composition which won the prestigious Croatian musical award Porin and which made everyone long for their next concert. 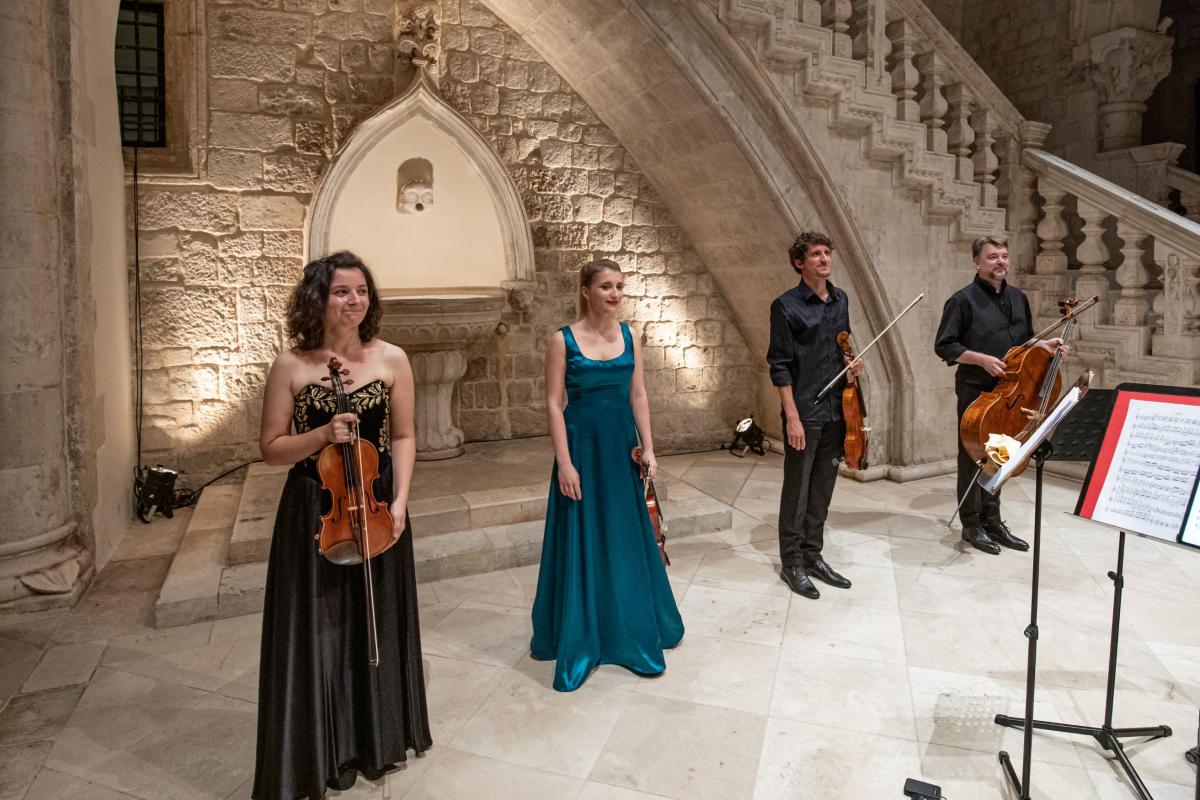 The next concert in the Rector’s Palace is on Friday, 6 August at 9.30pm when leading American tenor Lawrence Brownlee will perform choice repertoire of Verdi’s, Rossini’s and Liszt’s solo songs, some Donizetti opera arias, and the Neapolitan songs with accompaniment by Vesna Podrug Kossjanenko on piano.