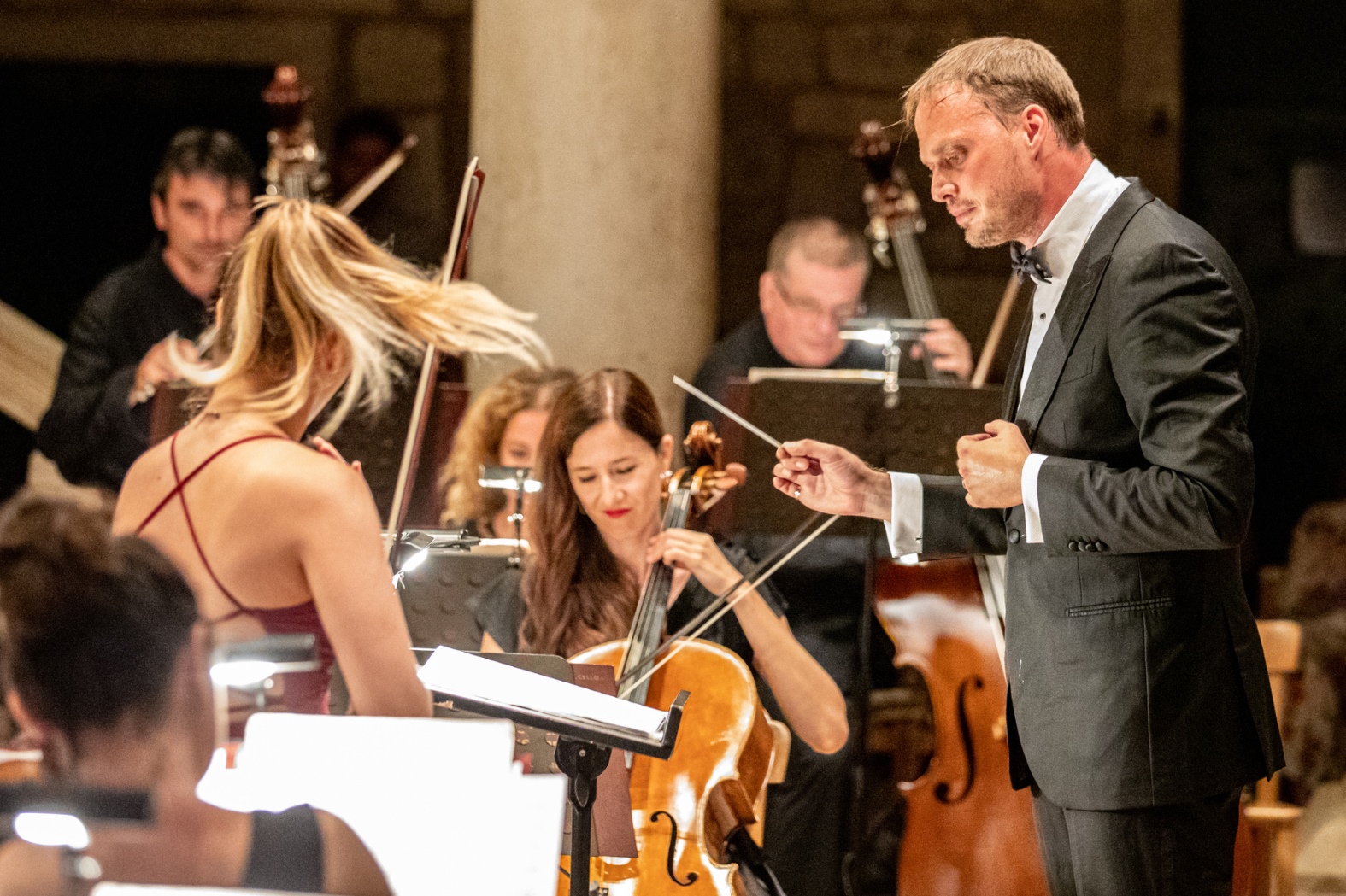 The Dubrovnik Symphony Orchestra (DSO) String Chamber Ensemble held a concert last night, 29 July in the Rector’s Palace atrium with the violinist Eva Šulić under the baton of maestro Ivan Hut, who had his Festival debut after becoming a DSO conductor in December last year. The Orchestra and Šulić played pieces by Dešpalj, Piazzolla and Shostakovich. 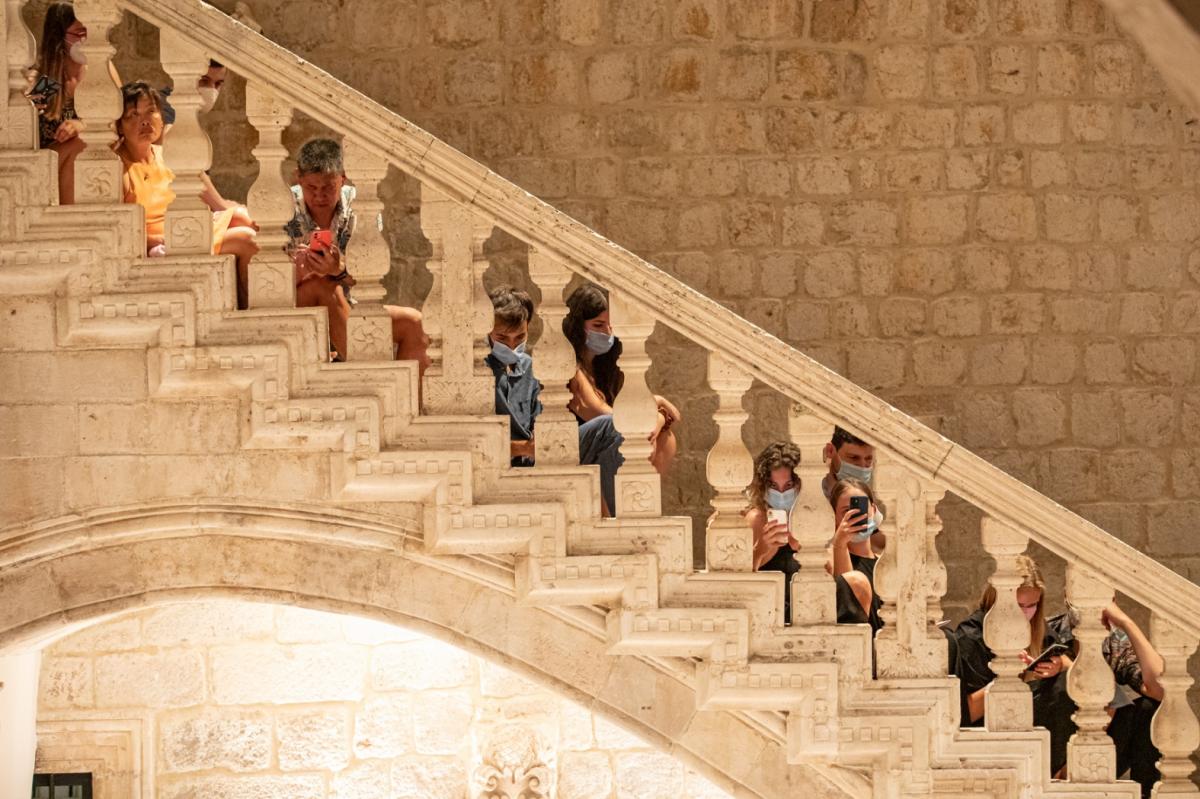 The evening’s programme opened with Šime Dešpalj and his Moba – Prelude, Chorale and Fugue for Orchestra, one of the most performed pieces by this eminent Croatian composer, a piece through which folk motifs are woven evoking tradition and community (moba is a ‘Croatian tradition of villagers helping each other with larger works that need to be done at once or as fast as possible’). Moba was written for the first edition of the Musical Evenings in St. Donat Church in Zadar, a festival established by Dešpalj’s son Pavle, and for the newly-founded Zadar Chamber Orchestra. Next came The Four Seasons of Buenos Aires or Cuatro Estaciones Porteñas by Ástor Piazzolla in honour of the one hundredth anniversary of the great composer’s birth, as arranged in late nineties by the conductor and composer of operas, cantatas and film scores Leonid Desyatnikov, and with the young yet already virtuoso violinist Eva Šulić joining the always brilliant and inspired DSO String Chamber Ensemble. The multiple award-winning Šulić was expressive and exhilarating in her performance, tirelessly lively and energetic, not letting a snapped string during Otoño Porteño slow her down and carrying on with equal, if not greater, gusto bolstered by the audience to which it seemed her high spirits and fiery zeal spread. It should be noted that conductor Ivan Hut was equally impressive in his first ever performance at the Dubrovnik Summer Festival. Lastly, the programme was concluded by Shostakovich’s Chamber Symphony Op. 110a, a dedication to the memory of the victims of war and fascism which he witnessed and experienced himself, as arranged by Rudolf Barshai. The brilliant performance of the impressive programme elicited a truly thunderous applause and standing ovations, Eva Šulić having been called back for a bow five times, and the conductor and the Orchestra similarly rewarded by the elated audience. Thus, maestro Hut and the DSO treated the Rector’s Palace with Bach’s 2nd movement Air from Orchestral Suite in D major, concluding the superb evening of music “with peace and serenity” as Hut said, after thanking the audience and congratulating the musicians. 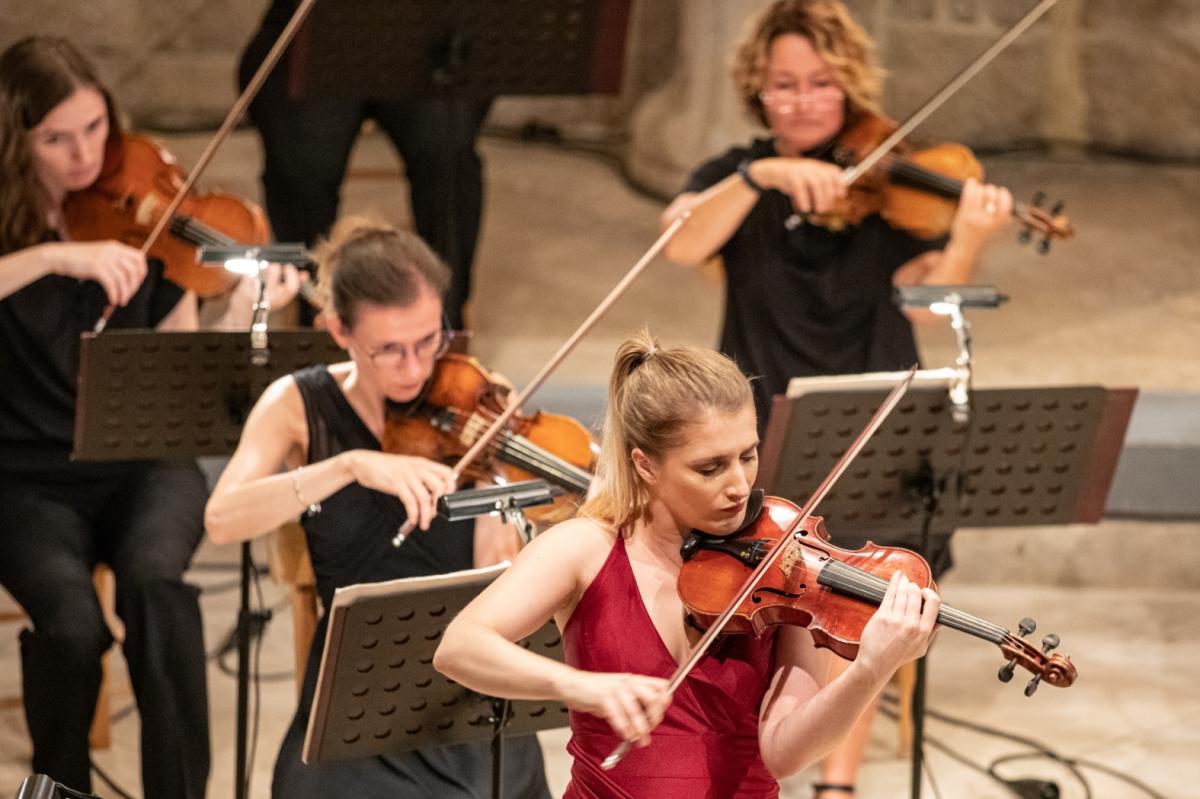 Eva Šulić will have another performance at the 72nd, as part of the kvARTet ensemble in which she is joined by violinists Đana Kahriman and Šimun Končić with cellist Pavle Zajcev, also in the Rector’s Palace atrium on Tuesday 3 August at 9.30pm. On the programme will be inimitable Beethoven and Dvořák.