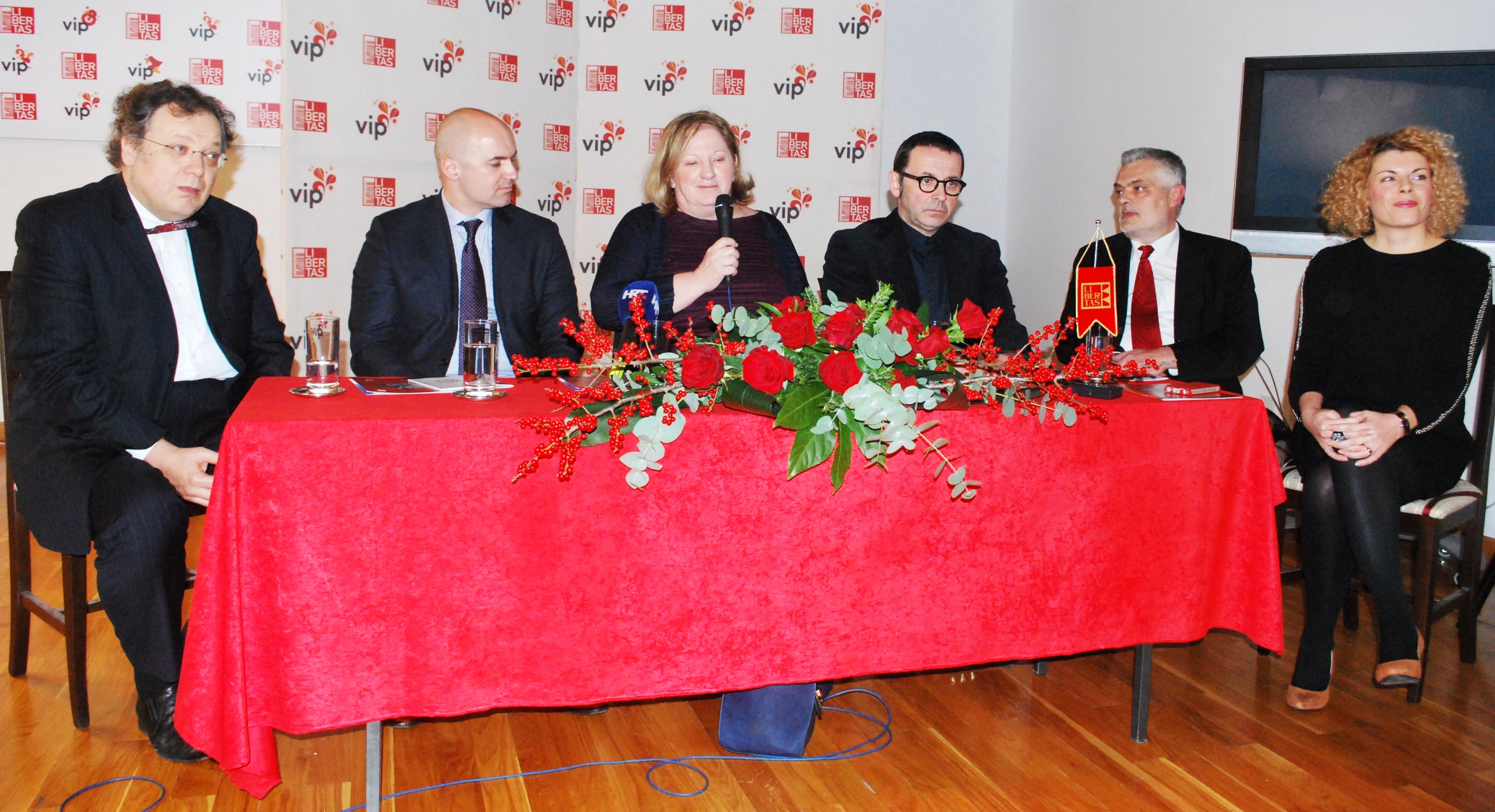 Preliminary Programme of the Festival's 65th season, which will traditionally take place from 10 July to 25 August on various open-air venues of historical city of Dubrovnik, was announced on 2nd February

The Preliminary Programme of the 65th Dubrovnik Summer Festival, which traditionally takes place from 10 July to 25 August, has been presented by Krešimir Dolenčić, Artistic Director, Mladen Tarbuk, Music Director, and Ivana Medo Bogdanović, Executive Director, at the Festival Palace, on 2 February, within the Festival of St Blaise and the City of Dubrovnik Day. Expressing their support of the Festival, Andrea Zlatar Violić, Minister of Culture, Davorko Obuljen, on behalf of the Dubrovnik-Neretva County Prefect, and Nenad Vekarić, on behalf of the City of Dubrovnik Mayor have attended the press conference.

The extensive 65th Dubrovnik Summer Festival's theatre programme includes several new projects. The first premiere is Shakespeare's Romeo and Juliet, translated by Luko Paljetak and directed by Jagoš Marković. This prestigious theatre director decided to stage his Dubrovnik Festival debut play - one of the most beautiful love stories ever - in the Renaissance summer residence of the Skočibuha family at Boninovo. Krešimir Dolenčić chose Držić Square to be the venue for his staging of Marin Držić's best-known and most frequently performed comedy, Uncle Maroje. As announced last year, the legendary Vojnović's Equinox - premiered in 2004 on the Island of Lokrum by the Festival Drama Ensemble and directed by Joško Juvančić - is included in this year's programme as well. The Split Summer Festival's guest performance of Shakespeare's Timon of Athens, directed by Georgij Paro and premiered last year to wide critical acclaim, will take place in two locations: the Dubrovnik Centre for Advanced Academic Studies Atrium and Gradac Park. Fragments from Džemila Bukovica's War Diary, directed by Ante Vlahinić, will be first performed at the Dubrovnik Aquarium on 5 August, Croatia's Victory and Homeland Thanksgiving Day. Last year's successful project by Mani Gotovac entitled Writers Gathering at Sponza Palace, co-produced with the Croatian Writers' Association, continues this year too. It includes the premiere of the play Ocean Sea, directed by Mani Gotovac and performed by the Croatian National Theatre of Varaždin at the Šulić Beach, featuring the novel's author Alessandro Baricco; the premiere of Ivo Brešan's play Without Reflection, performed by the Croatian National Theatre of Šibenik and directed by Vinko Brešan; and the premiere of Plato’s The Trial of Socrates, translated by Lada Kaštelan, directed by Božidar Violić and performed by Mislav Čavajda. The project's highlights include Arsen Dedić's literary evening entitled Writer of All Genres.

- Dubrovnik has to be protected. The 65 years of the Dubrovnik Festival cannot be compared to Orlando, the knight who protects with a sword his small space in front of St Blaise's Church. Shakespeare, Držić and Plato are warning us louder than ever: «Beware the future!». Obsessed with power, absurd quarrels, money and vanity, the fathers in Romeo and Juliet and in Uncle Maroje are trying to outwit their children, whereas - according to Baricco - we are merely small grains of «sand spreading as far the eye can reach». This year we proudly present the bards Georgij Paro, Joško Juvančić, Božidar Violić, Ivo Brešan, Arsen Dedić and Alessandro Baricco. We furthermore asked the ingenious Luko Paljetak to present us with a new translation of Shakespeare's magnificent tragedy, aiming to protect Dubrovnik, support it with our silence and respect, and envelop it with love, music, poetry and words out of which the City itself had been made – said Krešimir Dolenčić, Artistic Director.

At Bošković Square, the choreographer Valentina Turcu and theatre director Leo Mujić will stage the Neo-Baroque ballet Les Liasons Dangereuses (after Pierre Choderlos de Laclos' novel and Heiner Müller's Quartet, to music by George F. Handel, J. S. Bach, Antonio Vivaldi and other Baroque masters), a co-production of the Dubrovnik Summer Festival, the Slovenian National Theatre of Maribor and the Ljubljana Festival. Shortly after its Dubrovnik premiere, the ballet will be performed at the Križanke Outdoor Theatre within the Ljubljana Festival, and become a part of the Slovenian National Theatre of Maribor repertoire.

- Bearing in mind the historic and cultural heritage of Dubrovnik and admiring the purity of style of its architecture, I decided to fill the Baroque spaces of Dubrovnik’s palaces and churches with Baroque music and its present day reflections. Taking into consideration that the Baroque was the first national style in Europe – whose nuances differed from nation to nation – I chose the Festival’s programme backbone to comprise three concerts: the German, the Italian and the French one, which at are at the same time the three major national styles – explained Mladen Tarbuk, Music Director.

The Italian Baroque will thus be represented by the Concerto de' Cavalieri ensemble under the artistic leadership of Marcello di Lisa. The programme will include cantatas of Alessandro Scarlatti, Italy’s greatest composer in the Middle Baroque period. The German Baroque will be represented by one of the world’s most famous orchestras, the Bachorchestra of the Gewandhaus Leipzig, which will perform all Bach’s Brandenburg Concerti. The French Baroque will be represented by Le Concert Spirituel, the famous French vocal and instrumental ensemble performing under artistic directorship of Hervé Niquet. Croatia’s Baroque music representatives will include the Antiphonus Vocal Ensemble conducted by Tomislav Fačini and the Croatian Baroque Ensemble. Baroque music will also be performed by the internationally renowned Italian pianist Andrea Padova, First Prize winner in the Weimar Bach Competition, and Dieter Flury, solo flutist of the Vienna Philharmonic. In view of the fact that the present day jazz has greatly been influenced by Baroque music, the festival will feature the David Gazarov Trio, famous for its improvisations on the themes by J. S. Bach. Other performers will include the Slovenian Octet (St Blaise’s Church), the Tuba Quartet XL and trumpet player Eric Aubier (Dubrovnik Centre for Advanced Academic Studies), the Tartini Quartet (Rector's Palace) and several concerts of the Dubrovnik Symphony Orchestra featuring guest soloists. In collaboration with the City of Zagreb, the 65th Dubrovnik Summer Festival's closing concert in front of St Blaise's Church will feature the Zagreb Philharmonic conducted by Ivo Lipanović, and the world famous baritone Željko Lučić.

On the occasion of the Dubrovnik Festival's 65th anniversary, in collaboration with Zagreb's Museum of Arts and Crafts, and supported by the Sponza State Archives and the Dubrovnik Museums, the exhibition entitled Creators of Memory – Photographers and Designers at the Dubrovnik Summer Festival will be opened in two venues: Sponza Palace and Rector's Palace. For 65 Festival years, a large number of photographers – some of which include Croatia's finest artists in the field of photography such as Tošo Dabac, Vilko Zuber, Marija Braut, Krešimir and Slobodan Tadić and Pavo Urban – have systematically recorded events at the Dubrovnik Summer Festival. At the same time, the renowned artists including Edo Murtić, Fedor Vaić, Branko Kovačević, Tomo and Luka Gusić, Boris Ljubičić and Orsat Franković, have created posters, cover pages and – some of them – the entire visual identity of particular Festival seasons. The exhibition will acknowledge their importance in continuously creating and conceptualising both individual and collective visual memory for 65 years now. The Festival will also present its own release of the Monograph of Neva Rošić, the distinguished theatre actress who will celebrate her 60th anniversary of work next year. In collaboration with the Kinematografi Dubrovnik, the Dubrovnik Summer Festival will also present a film programme featuring the winning films at both national and international film festivals, and the screenings will take place at the open-air cinemas Jadran and Slavica. The folklore programme will traditionally include performances of the Linđo and Lado folklore ensembles.

Ivana Medo Bogdanović expressed her gratitude to all sponsors and donors - headed by Vipnet, the Festival's General Sponsor - who continue to support the Festival. She also announced the launching of the Festival's new web site on 1 March 2014, when the online tickets purchase will begin. Created by the Perpetuum Mobile, the Festival's long-time partner, the so called «responsive» design of the new web site will facilitate access to the Festival's online data by tablets and smartphones.