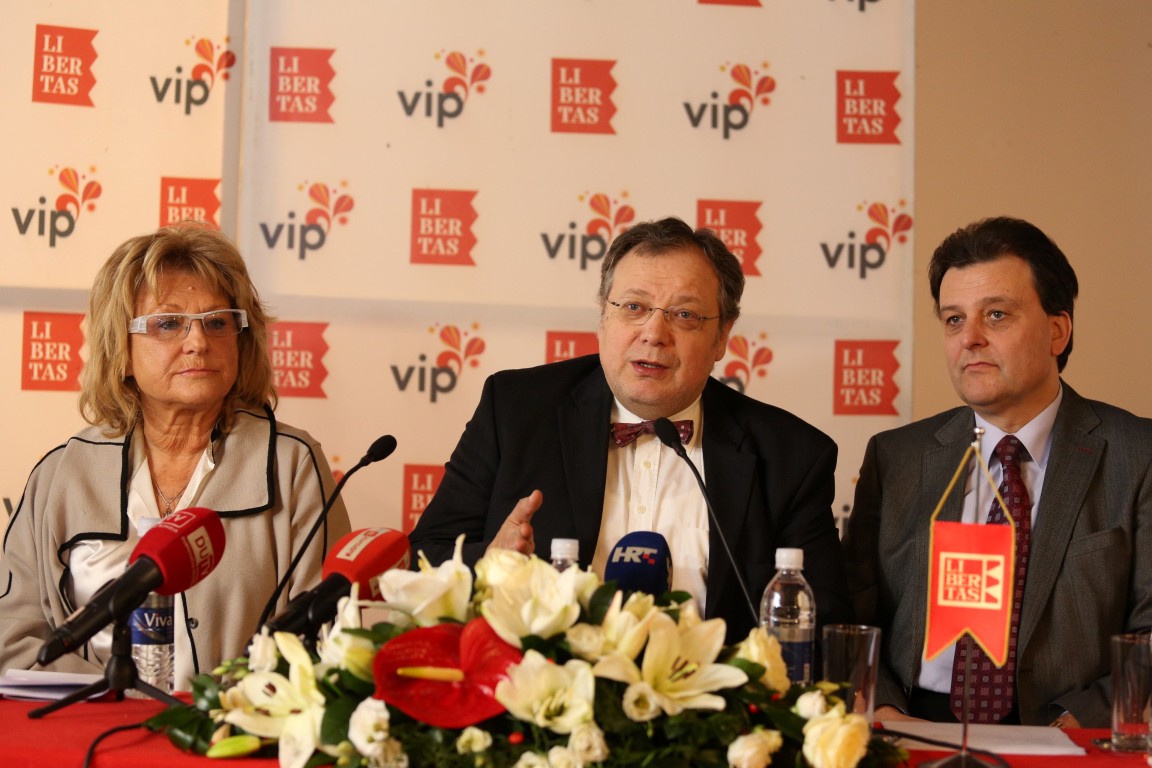 The Preliminary Programme of the 66th Dubrovnik Summer Festival, which traditionally takes place from 10 July to 25 August, has been presented by Mladen Tarbuk, Artistic Director, and his assistants for theatre and music programmes, Mani Gotovac and Mladen Janjanin, on Monday, 2 February, at the Festival Palace, within the Festival of St Blaise and the City of Dubrovnik Day. During the press conference, Nikola Pavlović, the Croatian Government's Commissioner for the City of Dubrovnik, and Davorko Obuljen, on behalf of the Prefect of the Dubrovnik-NeretvaCounty, expressed their support to the Festival.

- During the recession years, the Festival executives have shown maximum responsibility for the funds granted to them from the state budget. Thus, in presenting this year's Preliminary Programme, we again have to plan responsibly within that which is possible and not only within that which we would like to achieve. Of course, in addition to the announcements you will hear from my assistants for the theatre and music programmes, we are working hard together on a series of attempts to animate our economy. A recent systematic research carried out in the institutions of European Union showed that cultural and creative industries are among the greatest employers in the EU, and that they employ 5 times more Europeans than is the case with, for instance, the telecommunication industry. They also attract young workers and are starters of economic growth. We will have to present these data to the Croatian economic sector so that both culture and the Festival will be granted significant support. I would like to thank those who have recognised this, all our sponsors and donors headed by Vipnet, our general sponsor, – said Mladen Tarbuk, announcing his first season of serving in the post of Artistic Director.

His assistant for the theatre programme, Mani Gotovac, has presented programmes for the current, as well as for the forthcoming season, which coincide with her two year's mandate. Both programmes were entitled Woman, War, Love, while this year's theatre programme – in the year announced as the year of French culture in Croatia – has a subtitle The French Are Passing Through. The projects foreseen for 2016 include Shakespeare's Hamlet at Fort Lovrjenac, Alessandro Baricco's Iliad and the repeat performance of Držić's Uncle Maroje directed by Krešimir Dolenčić.

- This year, the Dubrovnik Summer Festival will remind that Dubrovnik is Croatia's best-known city and that the Dubrovnik Summer Festival is one of Europe's oldest and most famous festivals. In one of the world's most beautiful cities, the programme entitled The French Are Passing Through will be shown. This year, Croatia is the partner of France. And isn't Dubrovnik precisely the place of their numerous encounters? They haven't met only in Ivo Vojnović plays Allons Enfants! and On the Terrace, but the French are literally coming to the City. Writer and philosopher Pascal Bruckner is an honorary guest of Dubrovnik; The Elementary Particles by Michel Houellebecq, currently the world's most exciting writer, will be performed at the Festival; French films will be shown; French chansons will be sung; and a number of surprise guests will be presented – said Mani Gotovac.

The 66th Dubrovnik Summer Festival's programme of theatrical premieres will be opened by the play The Elementary Particles, or Atomised, based on the many times awarded novel by Michel Houellebecq, the French controversial, best-known and most popular writer of today. It will be the first Croatian staging of this novel, and the director of this play, Ivica Buljan, has chosen the Kupari Beach as the play’s venue. The second premiere play Allons Enfants,based on Ivo Vojnović's The Trilogy of Dubrovnik will be directed by Staša Zurovac. This three-act play will be performed at the Rector's Palace and in front of St Blaise's Church. This year's programme will also include Ivo Vojnović's Equinox directed by Joško Juvančić and performed by the Festival Drama Ensemble, the play's third season after its revival in 2013; last year's hit play, Shakespeare's Romeo and Juliet, directed by Jagoš Marković at the Skočibuha summer residence; and Baricco's Ocean Sea taking place on the Šulić Beach. Mani Gotovac's authorial project Writers at the Festival, carried out in collaborationwith the Croatian Writers Association, continues this year too, comprising the staging of Pascal Bruckner's novel Bitter Moon, directed by Paolo Tišljarić. The author of the novel, the renowned French philosopher, will attend the first performance and hold a literary evening. The Festival audience will also have the opportunity to become acquainted with Dražen Katunarić, the award-winning Croatian poet and essayist. Rade Šerbedžija will also have his authorial evening alongside Miroslav Tadić, one of the greatest guitar players in the region. Šerbedžija will begin his authorial evening with the monologue To be, or not to be at Fort Lovrjenac. Other theatrical guest performances will include Davor Mojaš's The Betrothed, the most recent project of the Lero Students Theatre, which intrigues, invokes, reveals, questions and recognises another face of the City of its birth.

The ballet repertoire will consist of a repeat performance of the last year's premiere of the neo-baroque ballet Dangerous Liaisons - choreographed and directed by Valentina Turcu and Leo Mujić, at Bošković Square, a co-production of the Dubrovnik Summer Festival, the Slovenian National Theatre of Maribor and the Ljubljana Festival - and of a guest performance of the Slovenian National Theatre of Maribor featuring Giovanni Battista Pergolesi ballet Stabat Mater, directed by Edward Clug.

The music programme of the 66th Dubrovnik Summer Festival will feature a number of world famous artists, such as the great pianist Ivo Pogorelić who will perform at the Rector's Palace Atrium with the Chamber Studio of the Zagreb Philharmonic under the baton of the renowned Hungarian conductor Zoltán Kocsis. The legendary conductor Uroš Lajovic will appear with the Slovenian Philharmonic in front of St Blaise's Church; the young Russian pianist Alexander Kutuzov, the first prize winner in the International Tchaikovsky Competition at the age of 16, will give a recital in front of St Blaise's Church; while pianist Itamar Golan, a favourite of the Festival audience, will perform with violinist Guy Braunstein, who was until recently concertmaster of the Berlin Philharmonic. Soprano Lana Kos will leave for a while the world's greatest stages where she performs on a regular basis to give a recital of Russian romances at the Rector's Palace Atrium early in August. The Festival audience will also have the opportunity to listen to another well-known jazz singer Gregory Porter.The last year'sGrammy winner in the Best Vocal Jazz Album Category will make his Croatian debut on the Revelin Fort Terrace in mid August. Other performers will include the famous Arensky Piano Trio from Sankt Petersburg, the Slovenian Octet and the Dubrovnik Symphony Orchestra.

An interesting film programme will be shown in the open-air cinemas Jadran and Slavica, while several exhibitions will be held as well. Following the long standing tradition, the Linđo Folklore Ensemble too will enhance this year’s Festival programme.