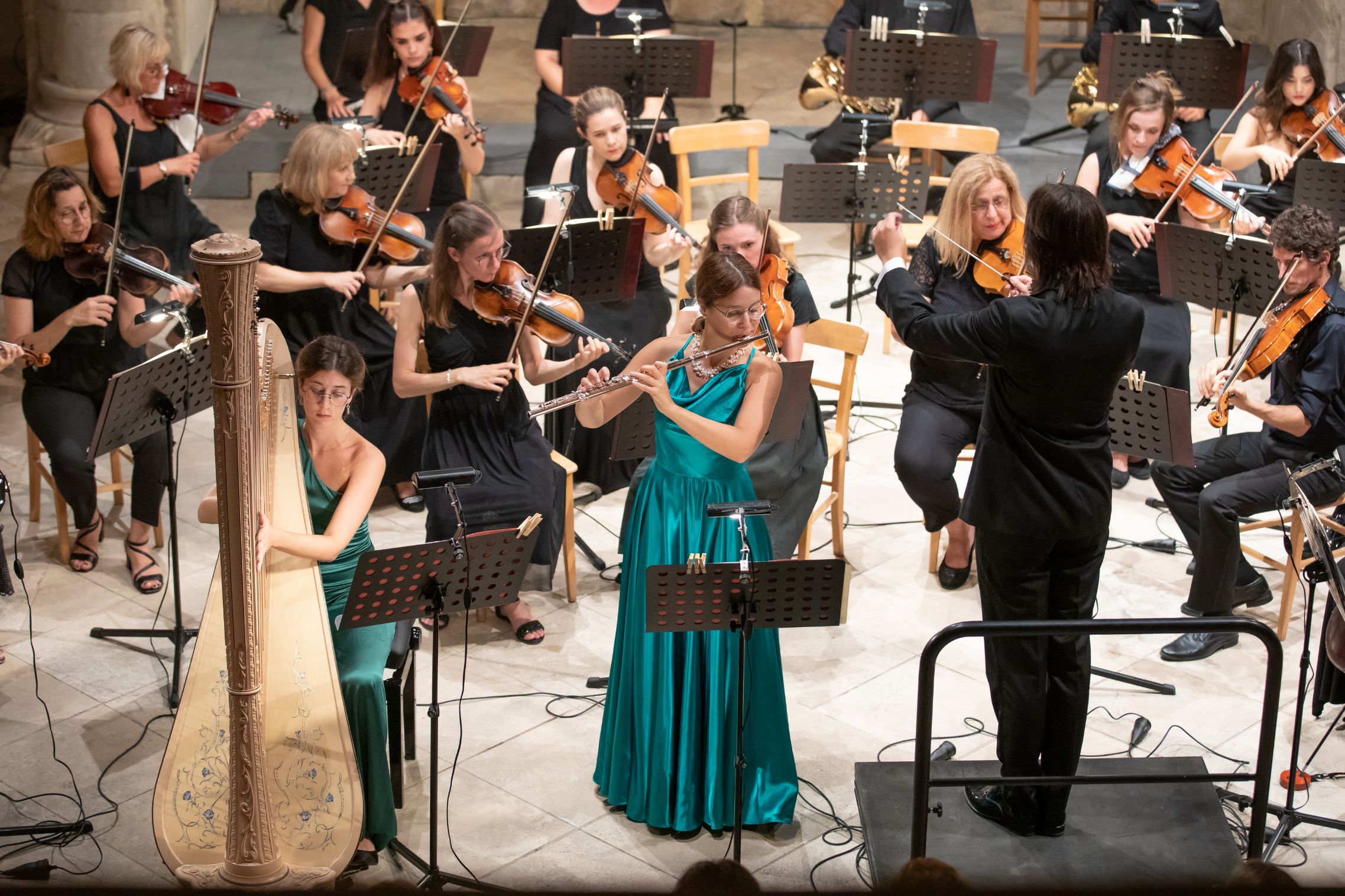 The Dubrovnik Symphony Orchestra under the baton of maestro Dawid Runtz held a superb concert, sponsored by Kraš, last night, 18 August in the Rector’s Palace Atrium with young soloists Veronika Ćiković on the harp and Lucija Stilinović on the flute. 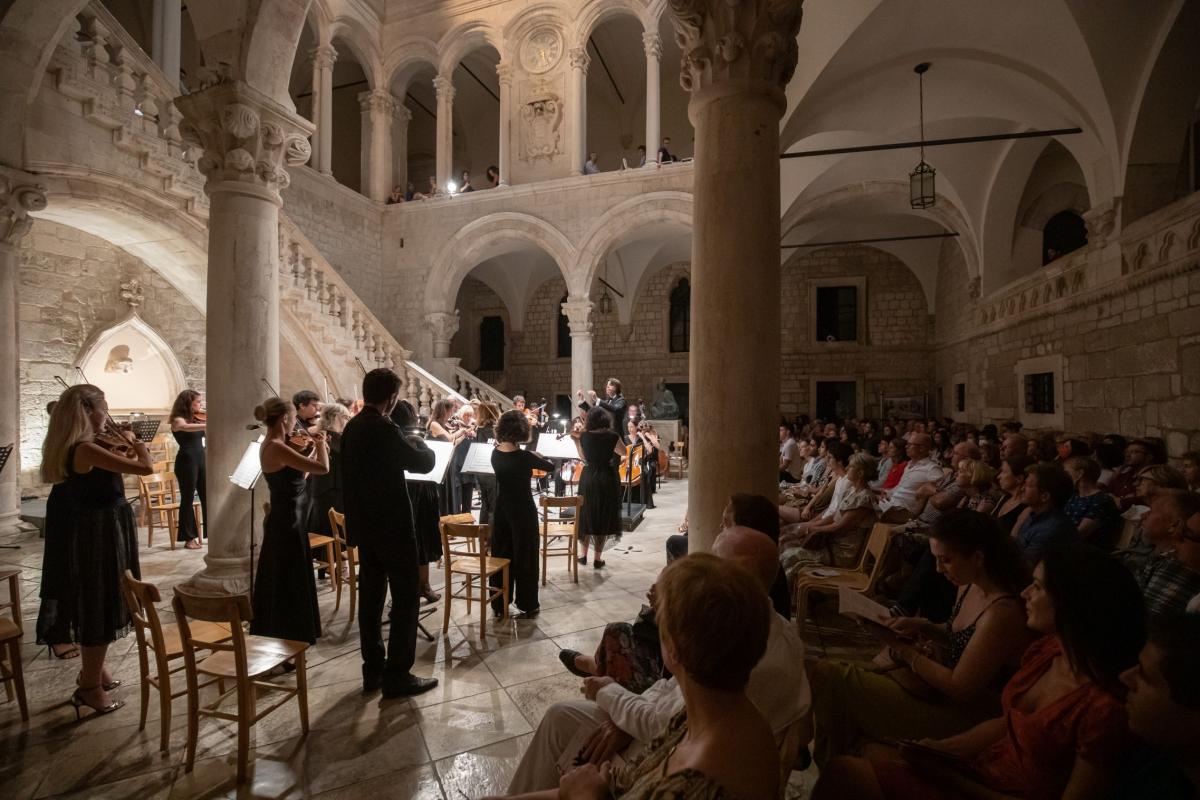 The overture of the evening's musical programme was Orawa, the crowning piece in a series of compositions by Wojciech Kilar, inspired by Polish mountain folklore. The symphonic song was played by the Dubrovnik Symphony Orchestra strings and from the very minimalistic beginning of the composition, the enraptured audience absorbed every note. The spontaneity, temperament, energy and strong gradation that led all the way to the final "hey" elicited loud and long applause with standing ovations and returned maestro Dawid Runtz to bow several times. They were then joined on stage by the young and promising soloists Lucija Stilinović on the flute and Veronika Ćiković on the harp, performing the three-movement Concerto for Flute, Harp and Orchestra in C Major by the classical music great, Wolfgang Amadeus Mozart. Mozart's only piece for the harp was written in 1778 and is one of the clearest examples of this composer's skill, beginning with its joyful Allegro. The playful dialogue of the flute, harp and orchestra was followed by a calmer Andantino in which the solo instruments took over the melody, while the energetic Rondeau – Allegro rounded off the work. As a thank you to the audience for their more-than-evident appreciation, the soloists, who normally perform as the duo Eolian, performed Lensky's Aria from the Eugene Onegin opera by one of the greatest romantic composers, Pyotr Ilyich Tchaikovsky. The finale of the concert was Mozart's four-movement Symphony no. 36 in C Major, better known as Linzer, performed by the Dubrovnik Symphony Orchestra. The piece, created in just four days, starts off a series of five Mozart’s great final symphonies, and itself begins with the tense and slow introductory Adagio – Allegro spiritoso, which Mozart included after the example of Joseph Haydn and his brother Michael. Following are the lively Andante, the magnificent Menuetto – Trio and Presto, which the composer wrote should be played "as quickly as possible". The audience's utter enchantment with the superb concert resulted in an impressively long applause and even more repeated invitations to maestro Runtz to bow. 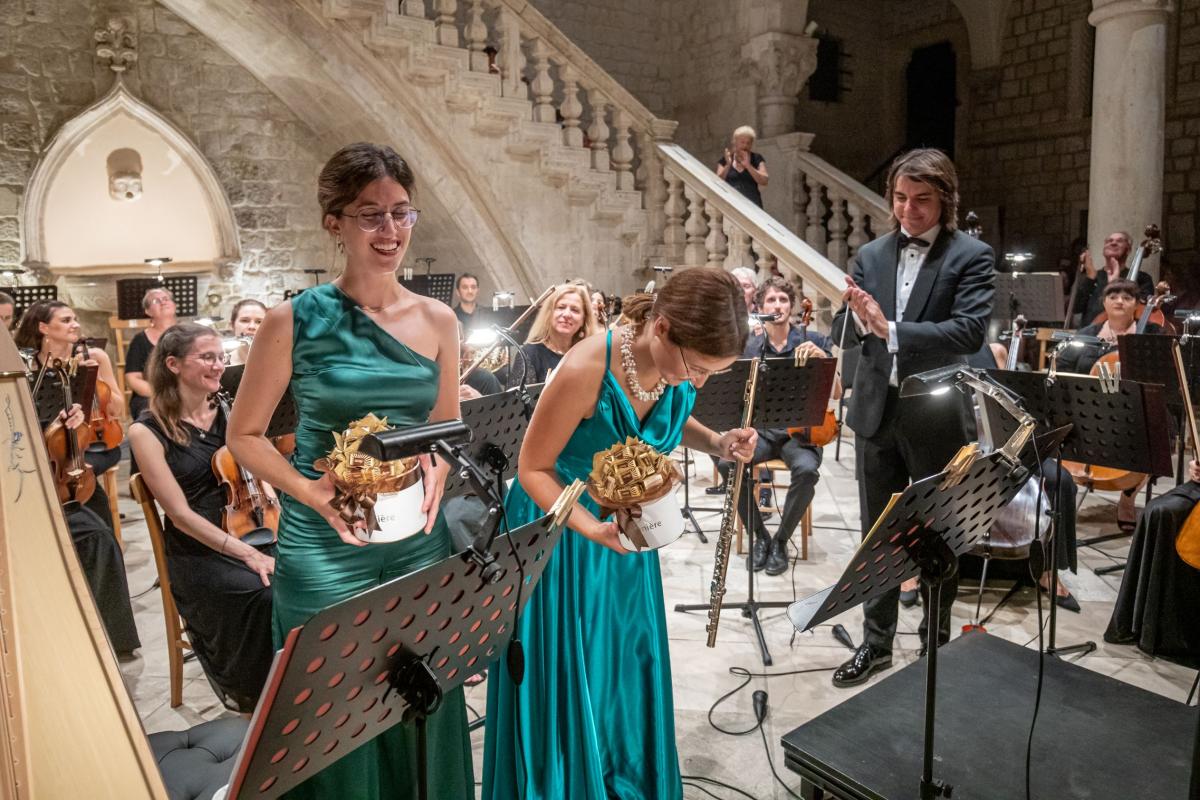 The 73rd Dubrovnik Summer Festival music programme continues on Monday, 22 August at 9.30 p.m. Rector’s Palace Atrium, where, under the auspices of the Caboga Stiftung foundation, an exciting ensemble of the best Dubrovnik musicians with an unusual selection of instruments and unique personalities will perform with soloists, flautist Đive Franetović Kušelj and mezzo-soprano Dubravka Šeparović Mušović under the direction of maestro Tomislav Fačini as part of the unique musical project Dubrovnik on a Rock of Music of which this season’s programme brings works by Ravel, Hindemith, Osghian and De Falla.