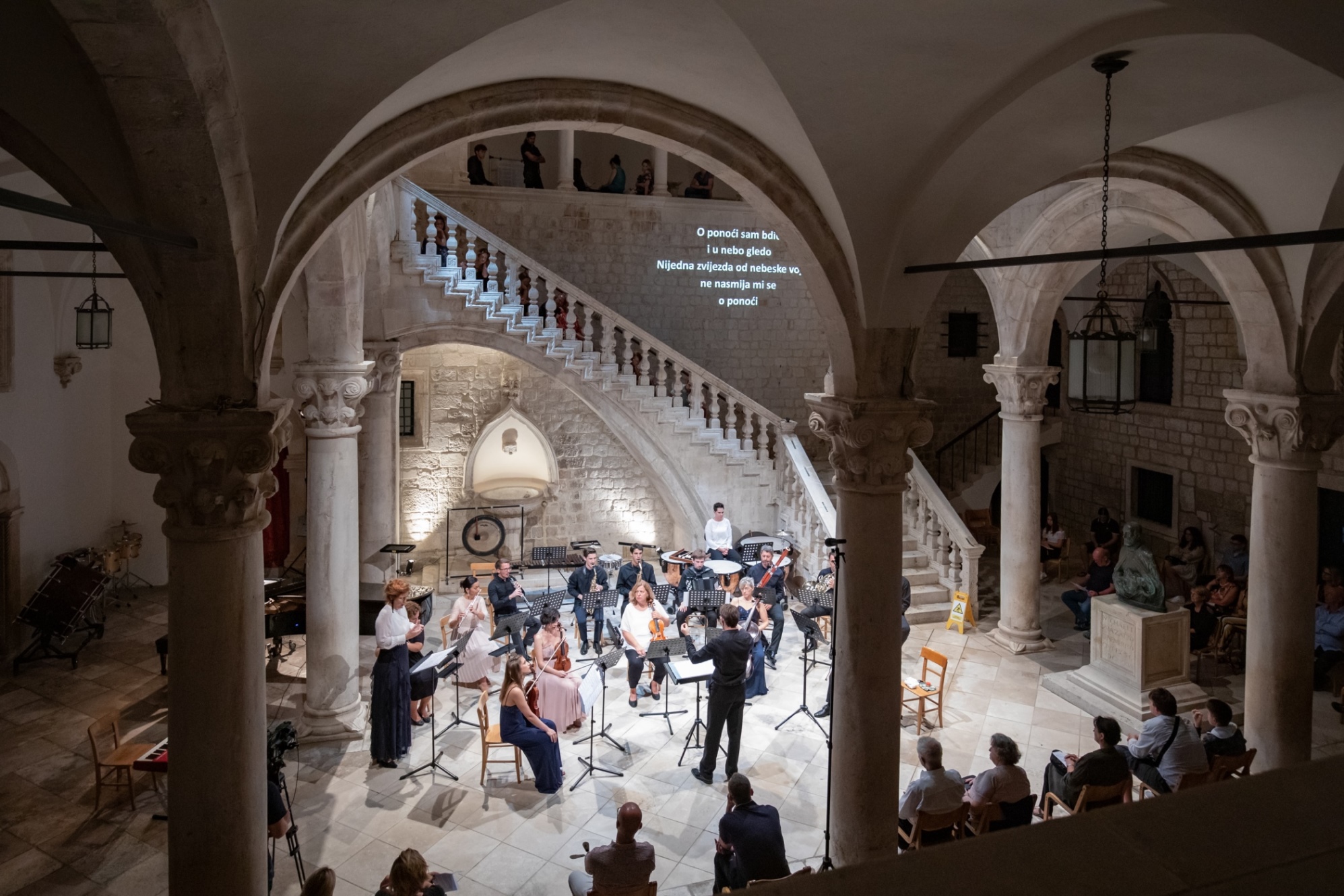 The unique programme Dubrovnik on a Rock of Music gathers an exciting ensemble of top Dubrovnik musicians of unusual instrument choices and distinct personalities once again this Festival summer, supported by Caboga Stiftung foundation, on Tuesday 10 August in the Rector’s Palace atrium, at 9.30pm. The ensemble conducted by Tomislav Fačini will perform pieces by Debussy, Ibert, Đurović and Mahler.

Dubrovnik on a Rock of Music is another iteration of last year’s Festival success of the same name, a programme which has roots in 2018 and the 69th Dubrovnik Summer Festival programme Dubrovnik sails in intonation and through which Dubrovnik’s best musicians demonstrated that they – the artists – are that rock of music, who preserve the city’s vitality and rich cultural heritage. This year under the baton of maestro Tomislav Fačini is the ensemble made up of Mirabai Weismehl and Tara Horvat violin, Lidija Martinović viola, Vanda Đanić cello, Denis Ajduković double-bass, Ivan Kušelj trumpet, Toni Kursar horn, Matija Novaković bassoon, Đive Kušelj flute, Antonio Haller oboe/cor anglais, Stijepo Medo clarinet, Veronika Ćiković harp, Stjepan Vuger accordion, Karmen Pervitić and Fran Krsto Šercar on percussions. The concert will open with Claude Debussy’s Prelude to the Afternoon of a Faun as arranged by Tomislav Fačini. In the performance of Jacques Ibert’s Concertino da camera the ensemble will be joined by young saxophonist Lovro Merčep, winner of numerous national and international competitions whose sensational performance of Ivan Končić’s Concerto for saxophone and strings at the 66th Festival is still talked about. The second half of the evening brings a Frano Đurović piece, his Piano concerto dedicated and debuted in 2010 by Marija Grazio who will be performing it again at the concert. It bears reminding that the Dubrovnik pianist Grazio has been awarded the Dubrovnik Summer Festival Orlando award for best music performance in 2006 for her interpretation of Dmitri Shostakovich’s Piano Concerto No. 1. To round off the programme are Gustav Mahler’s Lieder eines fahrenden Gesellen, or Songs of a Wayfarer, as arranged by Fačini and performed by mezzosoprano Dubravka Šeparović Mušović, a two-times Orlando award winner (2000 and 2013) who has magnificently interpreted the great Mahler in the last year’s Rock as well.