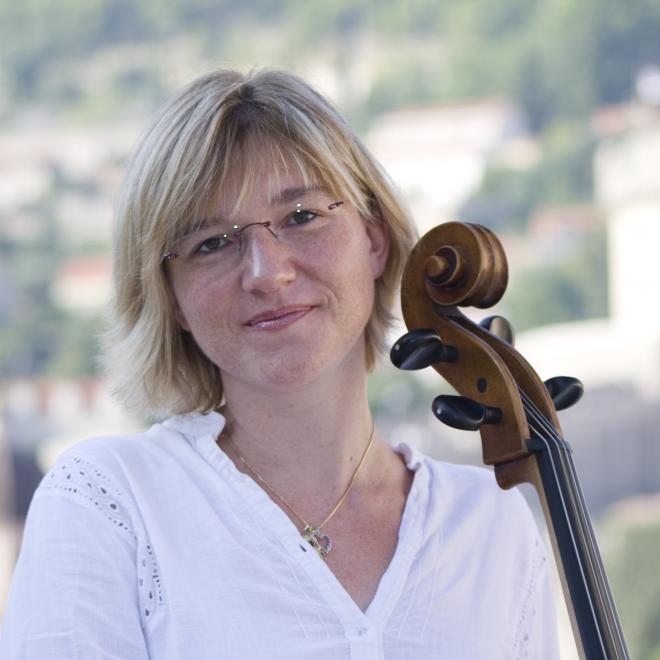 VANDA ĐANIĆ was born to a very famous Dubrovnik's family of musicians - Cobenzl. From the very beginning she showed extraordinary talent which resulted in numerous concerts and awards.

She started her musical studies at the Dubrovnik Music School, continued at the Academy of Music in Zagreb and graduated at the Academy of Music in Belgrade under professor Ksenija Janković Richter. She won many prizes at student competitions during her studies. Vanda participated twice as a member of the youth orchestra Alpe-Adria, along with the best students from Croatia, Slovenia, Austria, Italy and Hungary.

She became cello leader in Dubrovnik Symphony Orchestra in 1991, and started to play chamber music in Dubrovnik Piano Trio in 1992. In 1993. she had a part time job as a cello teacher at Luka Sorkočević school of Arts. Her students have always been exceptionally successful in national and international competitions, both as soloists and chamber musicians. Vanda is often invited as a member of juries of regional, national and international competitions, and asked to teach in masterclasses for cello and chamber music.

She is a member and the artistic leader of Dubrovnik String Quartet since 1996., a chamber ensemble which performs over 30 concerts annually.

In 2004. she started to work as a permanent cello and chamber music teacher, as well as the orchestra conductor at the Luka Sorkočević School of Arts in Dubrovnik. Under her leadership, the orchestra won first prize on national competition. For many years, she has pursued her instrumental improvements in master classes with famous prof. David Grigorian on Laus Academy, while in 2008. she obtained the postgraduate master degree at the Music Academy in Sarajevo in the class of prof. Yevgeny Xaviereff.

In 2008. she began a very successful collaboration with pianist Alberto Frka, and together with violinist Loris Grubišić they founded Piano Trio Dubrovnik that resulted in numerous great concerts.

In 2010. Trio was invited to have a concert in Pecz which was Europe's cultural capital at the time; In 2013. they were chosen to represent Croatia on 41. ESTA congress in Oxford where 32 countries participated; In 2015. Trio recorded a CD 'Tango to go' under the label of  Croatia Records, consisted of the most significant works of Croatian composers of 20th century.

As a soloist, the leading cellist of orchestra or a chamber musician, she performed on stages all around the world, including: Indonesia, Sweden, Great Britain, France, Austria, Hungary, Italy, Slovenia, Montenegro, Bosnia and Herzegovina...

Vanda is the Head of strings department at Luka Sorkočević School of Arts, and in 2014. she gained the status of Professor Mentor.

She continues a permanent collaboration with Dubrovnik Symphony Orchestra and takes part in all of its important events and projects.