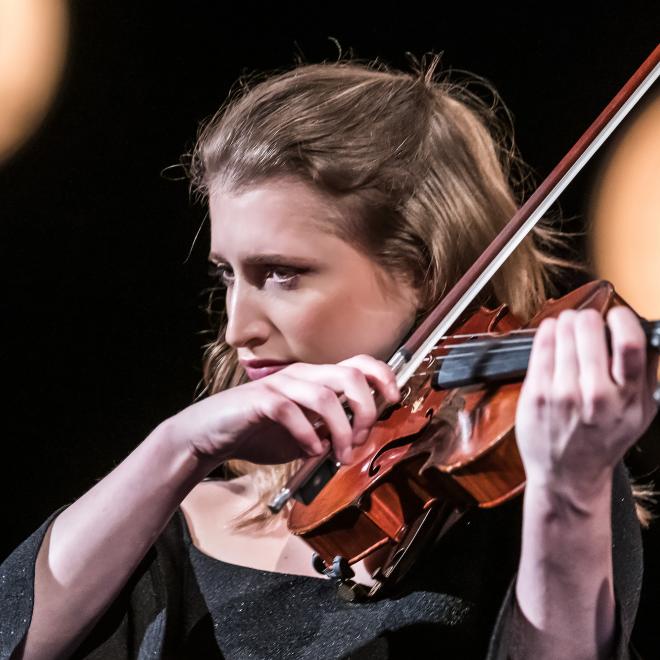 Eva Šulić (1997) has been playing the violin since she was four years old. Her first professor was Zorica Todorović at the Conservatory of Music and Ballet in Maribor. Already at the age of nine she continued to study at the J. J. Fux Conservatory in Graz in the class of Professor Helfried Fister. From 2011 to 2015, she attended the preparatory studies of violin at the University of Music and Performing Arts in Vienna with professor Leonid Sorokov. Eva studied with Professor L. Sorokow also at the Academy of Music in Zagreb and spend a total of 10 years under his guidance, and another year later in Vienna, again at the University of Music and Performing Arts - this time with his son Anton Sorokow, concertmaster of Vienna Symphony Orchestra.

In 2017, Eva began collaborating with cellist Tonka Javorović and pianist David Vuković in Trio Eusebius, under the mentorship of prof. Pavle Zajcev. In 2019, the trio won the international competition Ferdo Livadić, and the competition Boris Papandopulo in the category of standard chamber music ensembles. In 2021, they also won the main prize of the Darko Lukić competition. Together they performed at prestigious festivals such as Osor Musical Evenings, Dubrovnik Summer Festival, Samobor Music Autumn ...

She has participated in many music competitions. She is a multiple winner of the first prizes at the Slovenian national competitions TEMSIG, in 2006 and 2009 she won the absolute first prize at the international competition Ars nova in Trieste, and in 2013 she received a gold plaque at the international competition Giuseppe Tartini in Piran. In Vienna in 2016, she won the prestigious Stefanie Hohl competition. In 2021, Eva won the first prize at the Papandopulo competition, and the prize of the Croatian Society of Composers for the best performance of Boris Papandopulo's composition. She is the winner of the prestigious Stjepan Šulek Award for the best performance of a composition for violin, which was awarded to her by the Stjepan Šulek Fund in 2021.