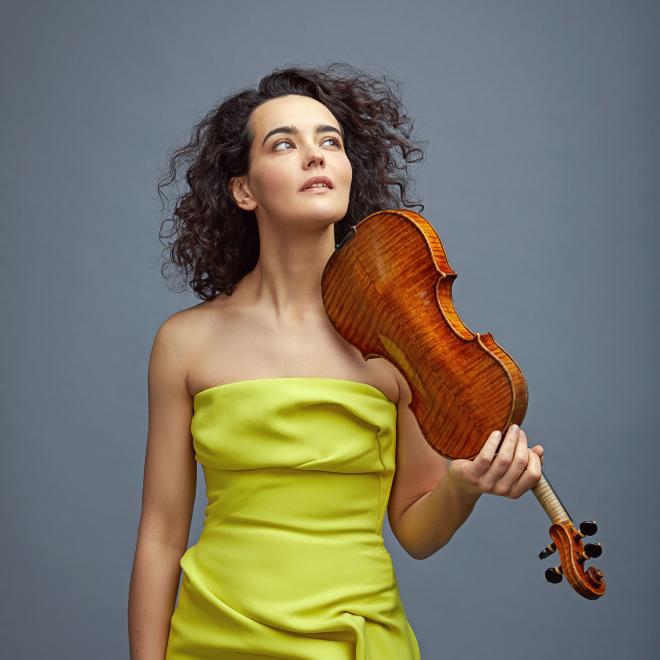 Described as a magnetic presence and a constantly fascinating sound technician (New York Classical Review), violinist Alena Baeva is considered one of the most exciting, versatile, and alluring soloists active on the world stage today.

Chamber music has always held a special place in Baeva’s musical life. She has the pleasure of collaborating with such esteemed artists as Martha Argerich, Yuri Bashmet, Steven Isserlis, Daishin Kashimoto, Misha Maisky, Lawrence Power, Julian Steckel, and Yeol-Eum Son. Her regular sonata partner is the celebrated Ukrainian pianist Vadym Kholodenko (2013 Van Cliburn Winner), with whom she has established a musical partnership of more than a decade.

Baeva holds an already vast and rapidly expanding repertoire, including over forty violin concerti, and is a champion of lesser known works – with recent performances promoting such composers as Bacewicz, Karaev, and Karłowicz, alongside more mainstream violin literature. She also enjoys a lasting relationship with the Orchestra of the XVIII Century, performing and recording a variety of repertoire on period instruments.

Baeva’s extensive discography reflects the impressive breadth of her repertoire, with recordings ranging from Szymanowski (for DUX), to Debussy, Poulenc, and Prokofiev (for SIMC), and more. Her Paris performance of Shostakovich Violin Concerto No.2 features as part of the Mariinsky Theatre/Valery Gergiev box-set DVD collection, released by Arthaus Musik in 2015. In 2018, she made a recording of both the Karłowicz Violin Concerto with the Royal Philharmonic Orchestra (for NIFC), and of the Tchaikovsky Violin Concerto with London Philharmonic Orchestra/Vladimir Jurowski, to be released on the LPO Live label. 2020 saw the release of her latest album – a recording of the Schumann Violin Concerto and the original (1844) version of the Mendelssohn Violin Concerto in E minor – released worldwide on Melodiya Records.

Born in Russia to a musical family, Baeva took her first violin lessons at the age of five under renowned pedagogue Olga Danilova, before going on to study in Moscow with Professor Eduard Grach at the Central School of Music and the State Tchaikovsky Conservatoire. In addition to her formal education, she studied in France with Mstislav Rostropovich, in Switzerland with Seiji Ozawa, in Israel with Shlomo Mintz (at Keshet Eilon Music Center), and in Paris with Boris Garlitsky. Aged 16, Baeva won the Grand Prix at the 12th International Henryk Wieniawski Competition (2001), as well as the Prize for Best Performance of a Contemporary Work. Following this, she went on to take the Grand Prix at the Moscow International Niccolò Paganini Competition (2004), including a Special Prize allowing her to perform on the 1723 Wieniawski Stradivari for one year, and was awarded both the Gold Medal and the Audience Prize at the Sendai International Violin Competition (2007).

Alena Baeva plays on the ex-William Kroll Guarneri del Gesù of 1738 – on generous loan from an anonymous patron, with the kind assistance of J&A Beares.