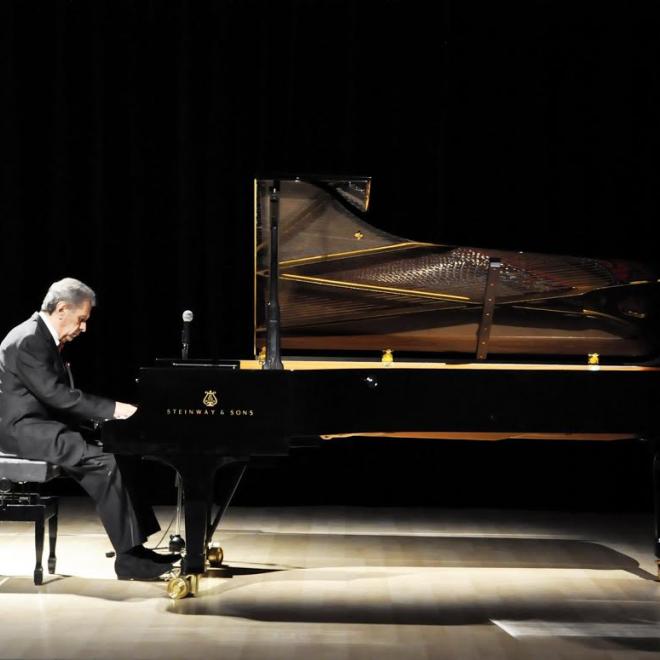 Many  great pianists of the past, have been great conductors, too, such as Liszt, Brahms, Fischer, Iturbi and Anda; also today Ashkenazy and Barenboim show that they can excel both as a concert pianist and as a conductor. Enrique Batiz began studying piano in 1950, under the guidance of Francisco Agea, teacher of many brilliant Mexican pianists, and he performed for the first time in public at  just five years. Later he studied with Gyorgy Sandor, Adele Marcus, Alexander Uninsky and he finally graduated in Warsaw with Zbignieg Drzewieckie. After winning the Prix Yuventudes Musicales of Mexico and Competition "Homenaye to Chopin" of the Television Mexican Canal 11, he has won several awards in the major European competitions of piano: "Busoni" in Bolzano, "Queen Elizabeth" in Brussels, "Marguerite Long" in Paris, "Chopin "in Warsaw. After a brilliant career as a pianist, Enrique Batiz has devoted himself to conducting, becoming one of the most famous Latin American conductors. He has conducted more than 500 orchestras around the world and has recorded for the BBC in London with the Royal Philharmonic Orchestra. Artist appreciated for his vehemence and his enthusiasm, he expresses a deep and special musical understanding even among the most recognized conductors. His discography consists of 145 records for the most popular labels (EMI, Naxos, ASV, Musical Heritage, ARS) made with the Royal Philharmonic Orchestra, the Philharmonia Orchestra, the London Symphony Orchestra, Liverpool Philharmonic Orchestra, the Symphony Orchestra of State of Mexico, the Orchestra della Toscana, etc. For some years now Batiz, despite the commitments with the orchestras and theaters, has returned to his first love, the piano, with the enthusiasm and the musical experience given by his more than thirty years career conducting, and with the ability to recreate at the piano the colorfulness of the orchestral sound palette. "The conductor Enrique Bátiz decided to recover the pianist Enrique Bátiz. A recovery that contains in itself a challenge to the arduous study, indispensable to the instrumental virtuoso but, at the same time, it is a reconquest that allows you to bring together all the plots of the infinite musical art territories "(Fernando Diez de Urdanivia). Throughout his career he has received numerous awards and major awards including the Prize of the Biennial of the Confederation of Professionals State of Mexico Art, the "Jose Marti" Award and the "Eagle of Tlatelolco Medal", the international prize " Golden mercury "in Rome (awarded for the first time to an  Latin American artist) and the " Medal of Rio Branco "in the rank of officer by the Government of Brazil. On four occasions (1971, 1981, 1983 and 1986) he has been granted the Union's annual prize of the Mexican Reporters of Theatre and Music.