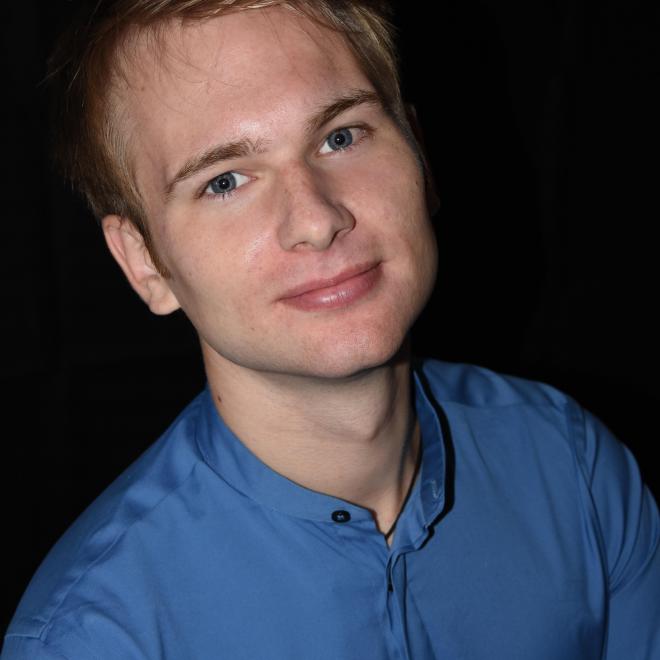 Franjo Bilić (Zagreb, Croatia, 1994) studied harpsichord in the class of Pavao Mašić at the Music Academy in Zagreb. He studied harpsichord and clavichord with Menno van Delft, basso continuo with Kris Verhelst, and rhetoric with Peter van Heyghen at Conservatorium van Amsterdam. He studied Conducting at the Hochschule der Künste Bern with Rolf Schumacher, Florian Ziemen and Philippe Bach and at the Music Academy in Zagreb with Mladen Tarbuk. In 2021 he studied Conducting at the Universität für Musik und darstellende Kunst Wien in the class of maestro Johannes Wildner. He started his music education as soloist (boyish soprano) of choirs, Krijesnice, and Zagreb boys choir performing all over Croatia and in Wisconsin (USA). Furthermore, he completed the Classic Gymnasium in Zagreb and the piano at the Music School Pavao Markovac in the class of professor Jelica Kuzmin. He appeared as soloist, chamber musician, as soloist with the orchestra and as harpsichordist in the orchestra of an attendee of the International summer school of baroque music and dance Aestas musica in Varaždin. He collaborated with ensembles and orchestras such as Croatian baroque ensemble, Zagreb soloists, vocal ensemble Antiphonus, Dubrovnik symphonic orchestra, Zagreb chamber orchestra, Zagreb youth orchestra, Sweelinck baroque orchestra and with famous musicians such as Adrian Butterfield (UK), Kimiko Nakazawa (Japan), Maxim Fedotov, Dmitry Sinkovsky (Russia), and Bojan Čičić (UK/Croatia). On state competitions of pupils and students of music in Croatia, he achieved the eight first, three second and two third awards in the period from 2007 to 2013, in disciplines piano, chamber music, and solfeggio. In the competition „Pianoforte“ in Poreč, except the first prize in the category, he received a specific prize for the best performance of the work by J. S. Bach. As a harpsichordist, he won the first prize of the 12th International competition „Ferdo Livadić“ in Croatia, being in the mixed instruments category with violin, cello, piano, etc. Moreover, in 2017, he won the prestigious competition Tribina Darko Lukić for young musicians, also in the mixed category. In 2018 he won the Second Prize of the PRIX ANNELIE DE MAN in Amsterdam. He won the 1st prize and special prize for the performance of the contemporary piece at WANDA LANDOWSKA harpsichord competition in Bari (Italy) in 2019. He is giving private classes, public lectures, and masterclasses in the field of early music every summer in Varaždin (Croatia). In the year 2018, he got the prize by Jeunesses Musicales – “Ivo Vuljević” and the title The best young musician of the year. As a conductor, he conducted Agrippina, an opera by G. F. Handel as maestro al cembalo in the Croatian National Theatre in Zagreb. He has been an active participant of Piccola Accademia di Montisi. Also, he attended numerous masterclasses of eminent professors in the fields: harpsichord (Skip Sempe, Christophe Rousset, Ketil Haugsand, Richard Egarr, Laurence Cummings, Aapo Hakkinen, Jacques Ogg, Elam Rotem, Anne-Marie Dragosits…), piano, piano accompaniment of singers, gregorian chant (Katarina Livljanić, Richard Bot, Franz Karl Prassl) early music, baroque dance, organ improvisation, organ, and harmonium d'art. In his free time, he composes music.