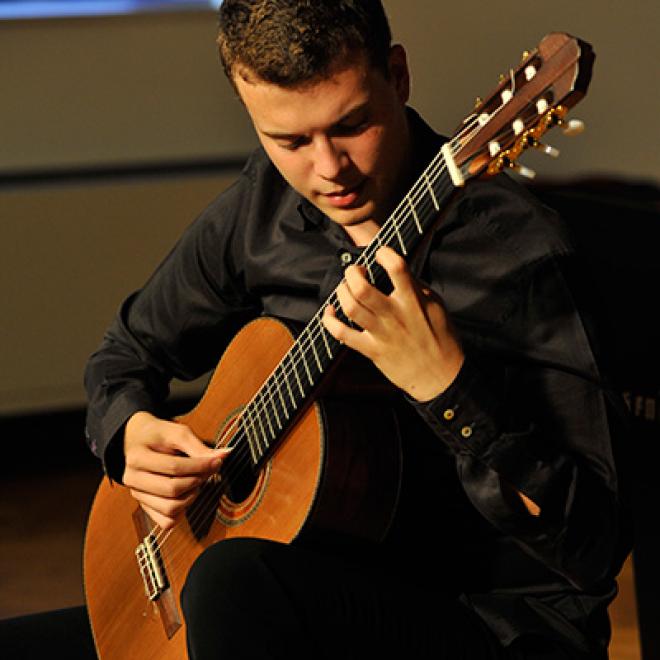 Srdjan Bulat (1986) is an award-winning concert classical guitarist from Split, Croatia. He is one of the most successful classical guitarists of the new generation and the top prize winner at almost all of the most important international classical guitar
competitions. He has won top prizes in Benicassim ('Francisco Tarrega'), Almeria ('Julian Arcas'), Alessandria ('Michele Pittaluga'), Valencia ('Alhambra'), Madrid ('Gredos San Diego), London ('London International Guitar Competition'), Rome
('Fernando Sor'), just to name a few; and has also won numerous special awards for the best interpretation of Spanish music, which is featured prominently in all of his recital programmes.
He has a Master of Arts degree from the Royal Academy of Music in London, which he has successfully completed, with high distinction, in July 2014. He was also awarded the prestigious ABRSM scholarship as the only international student of his generation to be given this honour. In September 2015 he completed his second postgraduate degree at the Music Academy in Zagreb, Croatia, where he specialized in classical guitar music written by contemporary Croatian composers. He has given many solo recitals around the world (London, Paris, Rome, Madrid, Oslo, Kopenhagen, Helsinki, New York, Chicago, Toronto), and has recorded two full lenght solo albums – his first for RTVE (Spanish National Radiotelevision), and his second for the prestigious recording company Naxos, which was released in September 2012.