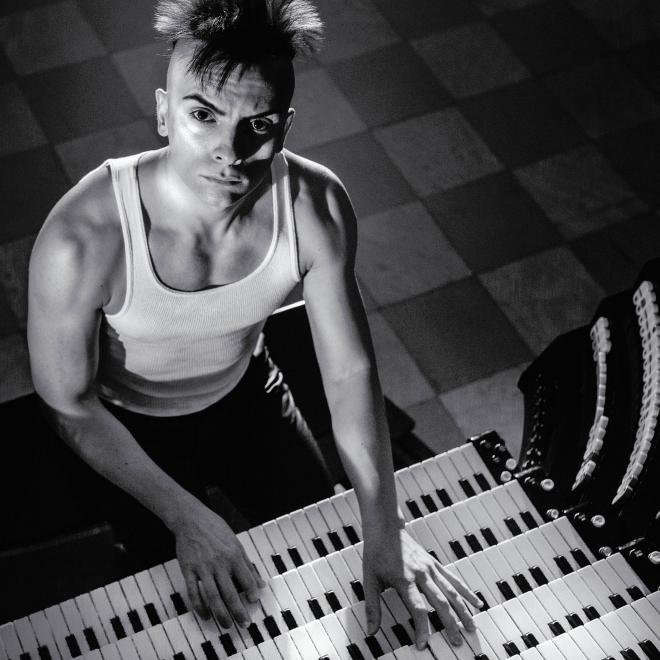 ‘He is a true pioneering musician, and a classic by-thebook virtuoso.’ - Moritz Weber, Neue Zürcher Zeitung

With his exceptional musicality, sheer endless technical ability and pioneering spirit, the extraordinary organist Cameron Carpenter is already leaving his mark on recent music history. Ever since the completion of his own instrument, the International Touring Organ (ITO) in 2014, Cameron defies initial scepticism towards this digital instrument and established the ITO on the world’s most prestigious stages. By now, he almost exclusively performs on the ITO, be it in recital or concerto appearances. This tailor-made instrument, based on Carpenter’s own plans, allows him to perform at almost any location worldwide. Thus far, he has taken it on tour to Australia, New Zealand and Asia in addition to numerous appearances around Europe and the US.

In spring 2016, following the ECHO winning release of If You Could Read My Mind (2014), his second album for Sony Classical, All You Need is Bach appeared, ‘unconventional’ and ‘supremely agile’ (Rolling Stone). Additionally, Carpenter was the first organist ever to receive a Grammy nomination for his album Revolutionary (2008) which he recorded for Telarc who have also released his Bach recording Cameron Live!

During the 2017/18 season, Cameron Carpenter is Artist in Residence at the Konzerthaus Berlin and performs in various concert formats. Among those are recitals and chamber concerts with members of the Konzerhausorchester Berlin as well as orchestral concerts under Christoph Eschenbach and Alexander Shelley. Further highlights include concerts with the ITO in Hamburg, Munich, Luxemburg, Basel, Ghent, Moscow and St. Petersburg. He also returns to the BBC Proms this summer.

Following a successful tour with the ORF Radio-Symphonieorchester Wien featuring Carpenter’s own arrangement of Rachmaninov’s Paganini Variations, Cameron Carpenter and his ITO embarked on another tour with the Academy of St Martin in the Fields in May 2017.

Born in 1981 in Pennsylvania, USA, Carpenter performed J.S. Bach Well Tempered-Clavier for the first time when he was eleven and became a member of the American Boy choir School in 1992. Besides his mentor Beth Etter, John Bertalot and James Litton taught him. At the North Carolina School of Arts he studied composition and organ with John E. Mitchener. Carpenter transcribed more than 100 works for organ, amongst others Mahler’s Symphony No 5. He composed his first own works during his studies at Juilliard School in New York, 2000-2006 where, at the same time he also had piano lessons with Miles Fusco. In 2011 his concerto for organ and orchestra The Scandal was premiered by the Deutsche Kammerphilharmonie Bremen at the Philharmonie Cologne. In 2012 he received the Leonard Bernstein Award of the Schleswig Holstein-Musik Festival.