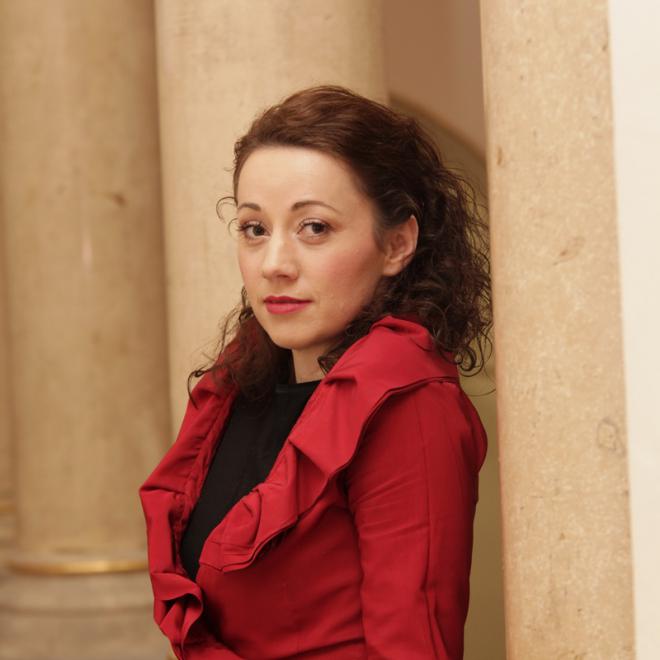 Monika Cerovčec was born in 1983, in Varaždin, where she completed her secondary school music education. In 2006, she graduated in musical culture from the Zagreb Academy of Music. At the same time she studied solo singing with Lidija Horvat Dunjko and, after that, with V. Marof, principal singer at the Opera of the Croatian National Theatre. She made her debut at the Croatian National Theatre of Zagreb singing the 2nd boy role (W. A. Mozart’s The Magic Flute). She later interpreted the roles of Nymph (C. Monteverdi’s Orpheus) Gianette (G. Donizetti’s The Elixir of Love) and Karolka (L. Janáček’s Jenufa). At the end of last concert season, she appeared in a lead role, that of Jelena (Ivan von Zajc’s Nikola Šubić Zrinski). In 2005, she won 1st Prize in the Croatian Music Competition in Dubrovnik, where she also interpreted the role of Bastien in a Dubrovnik Theatre production. That same year, she went to Mainz within a students exchange programme to study with A. Karasiak. She has attended master classes by world renowned singers such as M. Lipovšek, C. Eder, L. Spitzer and M. Nador. Cerovčec has performed as a soloist with the Croatian Radio and Television Orchestra, the Orchestra of the Croatian National Theatre of Zagreb, the Croatian Baroque Orchestra, the Zadar Chamber Orchestra, the Cantus Ensemble and the Croatian Army Orchestra. Cerovčec also gave an acclaimed recital at this year’s Music Biennale. As a chamber musician, she has performed at all major festivals and in numerous concerts in Croatia. She is currently engaged as a soloist in the Croatian Radio and Television Choir.