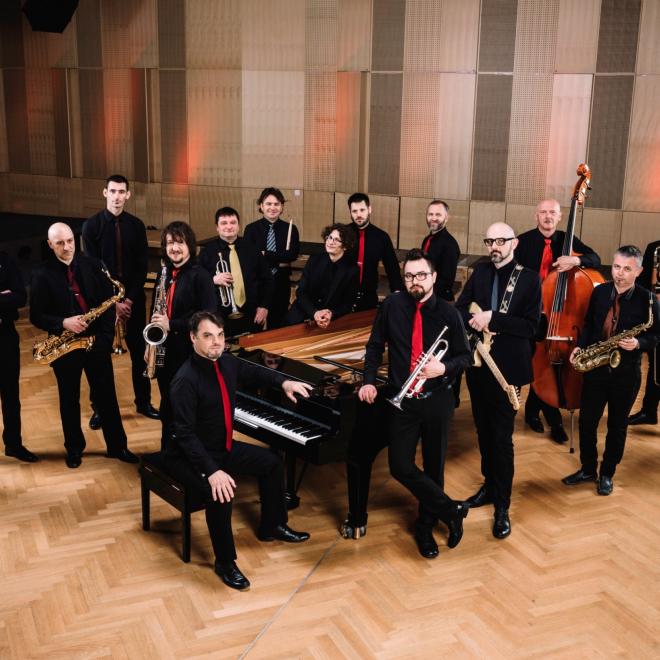 The Croatian Radio and Television Jazz Orchestra, the only professional band of its kind in Croatia, with a history spanning seventy years in continuity, ranks among the longest-standing big bands in the world. Established during the 1946/1947 season as the Radio Zagreb Dance Orchestra needed for radio programmes and recordings, in time it also started performing publicly. In addition to participating in a number of public programmes and independent concerts in Croatia and abroad, since the year 2000 it has had its own concert cycle that is directly broadcast on Croatian Radio’s Third Programme. The orchestra has been led by a number of conductors, with Miljenko Prohaska, who had been leading it for over thirty years, figuring prominently among them. The orchestra’s first appearance on the international scene was in Cologne in 1955. Tours of Bulgaria, Poland and the former USSR followed, as well as performances at jazz festivals in Frankfurt and Nagykanizsa, and in Munich in 1972, as part of the Olympics cultural and entertainment programme. The performance at the jazz festival in Bled in 1962 marked a new stage in the orchestra’s work, one focused on its own repertoire. The concept was authored by Miljenko Prohaska and resulted in the orchestra developing a specific, internationally recognisable style. This practice is still on-going and implemented today through the competition project New Compositions for the HRT Jazz Orchestra, author concerts by the orchestra members and numerous collaborations with Croatian musicians of various genres. At the same time, leading musicians from the international jazz scene regularly make guest appearances as soloists and conductors: Art Farmer, Clark Terry, Ted Curson, Johnny Griffin, Sal Nistico, Ernie Wilkins, Kai Winding, Ed Neumeister, John Lewis, Art Taylor, Lucky Thompson, Ignacio Berroa, Jon Faddis, Georgie Fame, Boris Kozlov, Lars Møller and others. Just during the last three seasons, the orchestra has hosted greats such as Terell Stafford, Ernie Watts, Bart van Lier, Luis Bonilla, Alan Broadbent, Christian McBride, Edward Palermo… As one of the most influential jazz bands on the Croatian music scene, the orchestra is also a real nucleus of top jazz musicians, many of whom are active not only as performers, but also as composers and arrangers. Since 2015 the chief conductor has been Andreas Marinello.

Its rich discography includes collaborations with some of the most prominent figures of the Croatian music scene. Some of its finest albums include U sredi našeg sela (2011), Still Standing with Radojka Šverko (2011), Family with Matija Dedić (2012), With Every Breath with Lela and Joe Kaplowitz (2012), Bugles Over Zagreb made with trumpeter Rex Richardson and composer Doug Richards, published in the US in 2014 for the Rex Richardson Production label, Antarctica and Other Destinations with music by Mak Murtić (World Local Records), Well Paid Girl with Valerija Nikolovska and Viktor Lipić (Croatia Records), Lasse Lindgren Plays the ABBA Songbook in a Big Band Atmosphere (Imogena Records), Stavi pravu stvar with Marko Tolja (Aquarius Records, 2017) and Chui ovu glazbu with the band Chui (Dancing Bear, 2017).