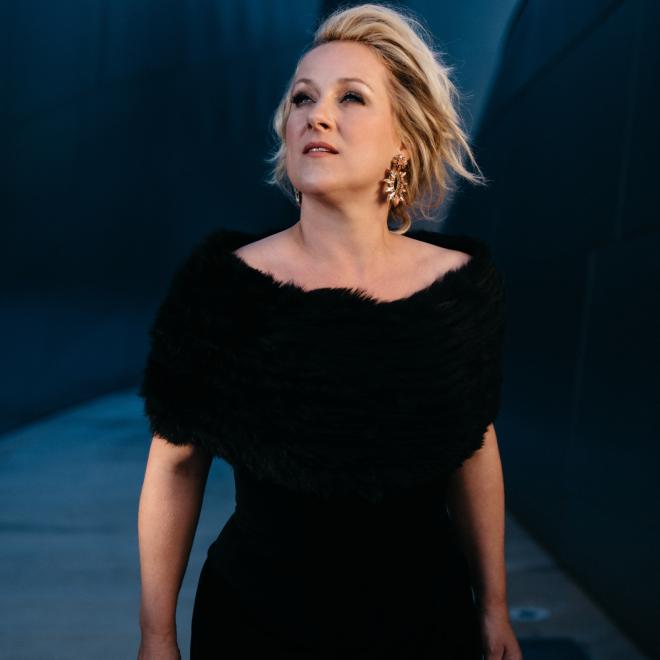 The Metropolitan Opera has been a house in which the soprano has performed her signature roles, been broadcast in HD to cinemas globally and made seven role debuts since her own debut there as Zerbinetta in 2005. Highlights have included new productions of Rigoletto (Gilda), Il barbiere di Siviglia (Rosina), Le comte Ory (Adèle) and Les pêcheurs des perles (Leïla). Further engagements have included the title roles in La Sonnambula and La Fille du Régiment and Romeo et Juliette. She was also the first singer in Metropolitan Opera history to perform the roles of Pamina and Queen of the Night in different performances of the same run of Mozart’s The Magic Flute.

The soprano has also performed contemporary works for the opera stage in roles written especially for her, most notably as the title role in Iain Bell’s operatic adaptation of Hogarth’s A Harlot’s Progress (Theater an der Wien 2013) and as Drunken Woman/Gym Instructress in Lorin Maazel’s Opera 1984 (Royal Opera House 2005).

Diana Damrau has established herself as one of today’s most sought-after interpreters of song, regularly performing at most worldwide renowned venues. She enjoys a close artistic partnership with pianist Helmut Deutsch and with harpist Xavier de Maistre.

Recording exclusively for Warner/Erato Diana Damrau made her recording debut with Arie di Bravura – a collection of Mozart and Salieri arias. Subsequent solo releases were awarded amongst others the ECHO and the OPUS Klassik prize. Damrau also features on various complete opera recordings on both CD and DVD.

In February 2018, Diana Damrau performed in the most renowned concert halls in Europe interpreting together with tenor Jonas Kaufmann and pianist Helmut Deutsch Hugo Wolf’s Italienisches Liederbuch. The according live album was released by Warner/Erato.

In addition, Diana Damrau made her debut in 2018 in title role in Maria Stuarda at the Opernhaus Zurich and she performed in the title role in a new production of La Traviata at the Metropolitan Opera, sang the role of Ophélie at the Gran Teatre del Liceu and at the Deutsche Oper Berlin in Hamlet.

In the 2019/20 season Diana Damrau performed the New Year's Eve concerts together with the Berlin Philharmonic under the baton of Kirill Petrenko. Further on, she performed recitals with Sir Antonio Pappano and returned to the Scala di Milano in Romeo et Juliette and to the Bavarian State Opera in
I Masnadieri.

A close cooperation connects Diana Damrau with the Bavarian Radio Symphony Orchestra. Besides their „Artist in Residence“ at the Barbican Centre London in 2019 they made guest appearances at Carnegie Hall New York, among others. In January 2020 the recording of Strauss' Four Last Songs under the baton of Mariss Jansons was released.

Diana Damrau is Kammersängerin of the Bavarian State Opera (2007), holder of the Bavarian Maximilian Order for Science and Art (2010) and the cross of Order of Merit of the Federal Republic of Germany (2021).