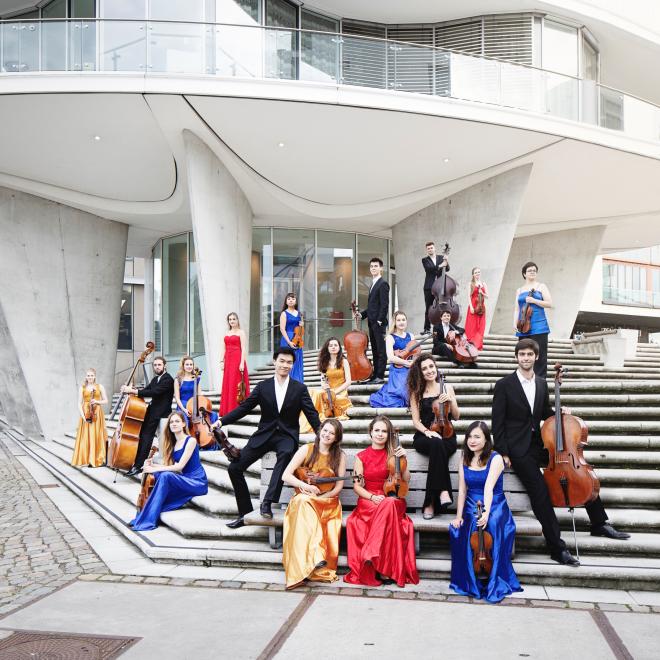 The ENSEMBLE ESPERANZA was founded in winter 2015 by the International Academy of Music in Liechtenstein, as part of its endeavours to provide talented young musicians with a holistic musical education. Its members are all scholarship-holders between 15 and 28 years of age. They come from all over the globe and are among the most promising musicians of their generation. The ensemble is led by its concert master, Chouchane Siranossian and its repertoire covers everything from Baroque to contemporary music.

The young ensemble gave its debut performance in February 2015 at the 5th FESTIVAL NEXT GENERATION in Bad Ragaz, where it received the highest of praise from the audience and the international press alike. Since then, the ENSEMBLE ESPERANZA has performed in several other equally acclaimed concerts in Liechtenstein, Austria, Germany, Switzerland and Croatia and has also performed with renowned soloists such as the violinists Anne-Sophie Mutter, Chouchane Siranossian, Marc Bouchkov and Sara Domjanic, the recorder player Maurice Steger, the cellists Istvan Vardai, Jens Peter Maintz and Wolfgang Emanuel Schmidt, viola player Adrien Boisseau and saxophone player / composer Daniel Schnyder.

The ensemble has received regular invitations to play at various festivals, including the FESTIVAL NEXT GENERATION and MusicConnects in Bad Ragaz, Switzerland, and the VADUZ CLASSIC festival in Liechtenstein. In 2017, the ensemble was honoured with the “Special Achievement Award” by the International Classical Music Awards (ICMA) followed by the OPUS KLASSIK prize in September 2018, awarded for the best promotion of young talents. Soon afterwards the ENSEMBLE ESPERANZA made its debut at Hamburg`s Elbphilharmonie, hosting a mini-festival with four sold-out concerts.

In February 2017, the ensemble released its first CD, “Nordic Suites” (ARS Produktion) with works by Edvard Grieg, Frank Bridge, Carl Nielsen and Gustav Holst. This was followed by the “Southern Tunes” CD, released in January 2018 under the same label, with works by Eduard Toldrà, Ottorino Respighi, Komitas and Nino Rota, and, like the debut CD, also received highest critical acclaim.

The recording of its third studio album – “Western Moods” - took place in autumn 2018. Expected date of publication is the spring 2019.