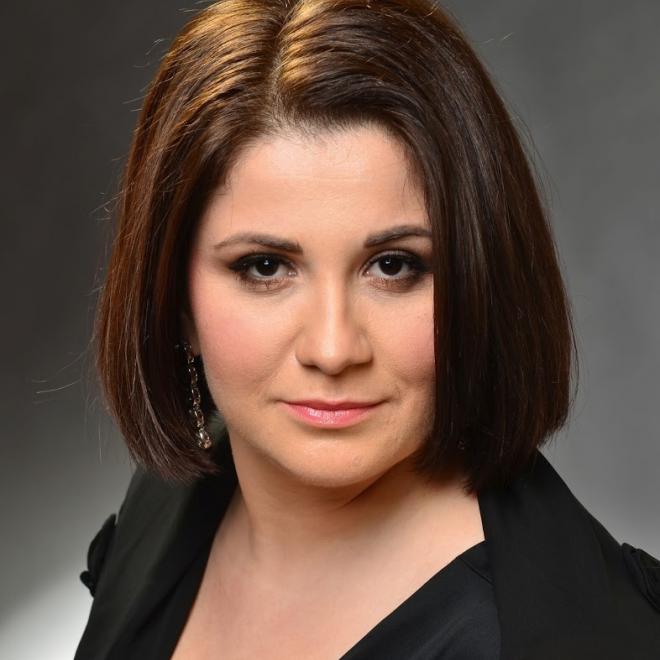 Soprano Valentina Fijačko is one of the most prominent personalities on Croatia’s present-day operatic and concert scenes. Her suggestive singing and acting skills coupled with her spontaneous interpretation have been warmly received at the Croatian national theatres of Split, Zagreb, Rijeka and Osijek, as well at Croatia's major music festivals. Fijačko began to study singing in her native town of Varaždin. She graduated and obtained her MA degree in singing from the Zagreb University's Academy of Music under Lidija Horvat Dunjko, and continued her studies in Vienna under the renowned music pedagogue and the Kammersängerin title holder Olivera Miljaković.

During her studies, Fijačko took part in many national and international competitions, and was a two-time 1st Prize winner in the Dubrovnik Students Music and Dance Competition (2001 and 2003). Her other prizes include the Zagreb Academy of Music Dean's Award, the University of Zagreb Rector's Award, the Marija Borčić Award for the Best Student at the Zagreb Academy of Music's Singing Department, the Ivo Vuljević Best Young Musician Award (2003), the Zagreb Philharmonic and PBZ American Express Best Young Musician Award (2004), the Croatian Theatre Award (2007), the Croatian National Theatre of Split's Antun MarušićAwardfor outstanding achievements in the season 2007/2008, and the Milka Trnina Award (2008).

In the course of her thirteen theatrical seasons, she has interpreted a large number of demanding soprano roles by the Italian, French, Slavic and Croatian opera composers, including seven written by Wolfgang Amadeus Mozart: Bastienne (Bastien und Bastienne), Fiordiligi (Così fan tutte), Susanna (The Marriage of Figaro), Zerlina and Donna Elvira (Don Giovanni), Papagena and Pamina (The Magic Flute). Her already extensive operatic repertoire includes three major Puccini roles (Mimi in La Bohème, Lauretta in the one-act opera Gianni Schicchi and Genevieve in Suor Angelica), and the two psychologically contrasting but equally demanding Italian roles (the pert Adina in Gaetano Donizetti's The Elixir of Love and the tragic Desdemona in Giuseppe Verdi's Otello). Another two completely character- and performing-wise contrasting roles that Fijačko has interpreted include the most impressive Slavic heroines: Mařenka in Bedřich Smetana's comic opera The Bartered Bride and Kseniya in Modest Petrovich Mussorgsky's musical drama Boris Godunov. Worth mentioning in her French repertoire are the roles of Marguerite in Gounod's Faust, Micaela in Bizet's Carmen and Helen in Jacques Offenbach's operetta The Beautiful Helen. Although her extensive repertoire spans almost all style periods, from the Italian early-Baroque composer Francesco Cavalli (opera Pompeo Magno) up to the 20th century composer Maurice Ravel (lyrical fantasy The Child and the Enchantments), Valentina Fijačko is particularly fond of soprano parts in the Croatian operas. She has interpreted with great success the roles of Jelena in Ivan von Zajc opera Nikola Šubić Zrinski, Mara in Josip Hatze opera Adel and Mara, Đula in Jakov Gotovac opera Ero the Joker, Marica in Ivo Tijardović operetta The Split Aquarelle, and most recently Lisabeth in Blagoje Bersa opera The Shoemaker of Delft.

Valentina Fijačko, Split's favourite opera singer, turned out to be the queen of that beautiful evening. Her debut in the role of Desdemona, one of the most demanding soprano parts, was a success worthy of global admiration. She acted for her partner too, and sang loudly enough to be heard as far as Šolta and Brač, yet never losing her sense of finesse and phrase. Fijačko was deservedly given a standing ovation, and this Otello will be remembered thanks to her in the first place.