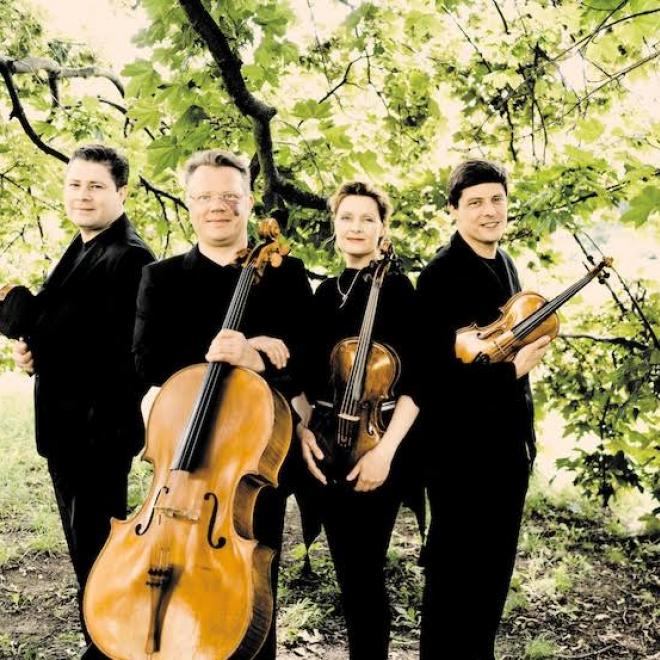 The year 1994 marked the foundation of the Henschel Quartett’s international career, when cellist Mathias Beyer-Karlshøj joined the founding members Christoph, Markus, and Monika Henschel, and the quartet devoted itself exclusively to chamber music.  In 1995 the quartet won multiple prizes at the international competitions of Evian, Banff, and Salzburg, and the following year won 1st prize and the gold medal at the Osaka International Chamber Music Competition.  Successful debuts in the world’s musical capitals, including an acclaimed BBC live broadcast standing in for the Juilliard Quartet, led their way to the forefront of international chamber music.  “This is, no question, one of the best groups in the world, a great string quartet.” (Los Angeles Times).

In February 2016 the quartet welcomed the celebrated violinist Catalin Desaga as a new member.

The quartet’s musical journey has included many remarkable highlights.  The Henschel Quartett played at the official re-opening of the Anna-Amalia Library in Weimar (a UNESCO World Heritage site), and travelled to Brussels as a Cultural Ambassador of the Federal Republic of Germany.  In March 2010 the quartet was privileged to perform at the Vatican in the presence of Pope Benedict XVI.  The quartet has regularly been invited to the Royal Palace of Madrid to perform on the four Stradivari of the royal collection.  In June 2012 the Henschel Quartett was invited, as the first European quartet in twenty years, to perform Beethoven’s complete string quartets in the prestigious Suntory Hall in Tokyo.  In the same year Monika Henschel became the president of the newly-formed Association of German String Quartets, and in 2013 Christoph Henschel was appointed Honorary Professor at the University of Augsburg.

Highlights of last season and the current one include appearances in London, Amsterdam, Munich, Yokohama and Tokyo (Geidai University).

The Henschel Quartett’s recordings have been awarded many prizes, including the Preis der Deutschen Schallplattenkritik and several CD of the Year Awards (IMW).  Their CDs have been recommended in such prominent titles as Gramophone Magazine, the Sunday Times, and the Süddeutsche Zeitung. Forthcoming is a CD of works by Christopher Theofanidis.

The Henschel Quartett regularly accepts invitations to teach at world-class institutions, from Yale University in the USA to the Royal Northern College of Music in England and the University of Melbourne in Australia.  The quartet is also engaged in an ongoing dialogue with the Bavarian Ministry of Culture in relation to youth music projects in the quartet’s home city of Munich.

Since 2006 the Henschel Quartett has been contributing as an Ambassador of SOS Children’s Villages.