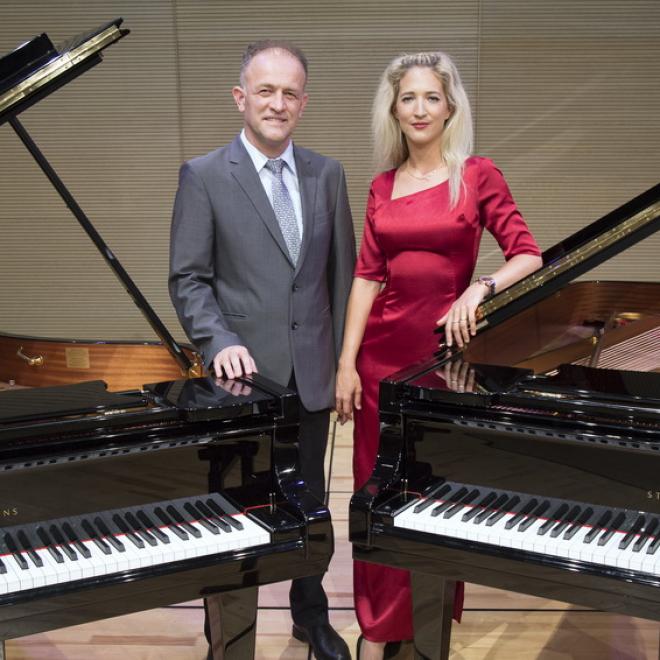 Ivančić & Cikojević Piano Duo describe their concert programme at this year’s Dubrovnik Summer Festival as ‘a true apotheosis of rhythm and dance’ in which the dance suite Horoscope, the duo’s first project, takes central place among the rhythms and dances by Poulenc and Milhaud. The premiere of the work in its original form – for piano and percussion – took place in Houston, Texas, in 2017 (since, as they say, it is not clear whether percussionists took part in its first performance in 1936), and they recently recorded it with percussionists Ivana Kuljerić Bilić and Nikola Krbanyevitch.

Zrinka Ivančić Cikojević is one of the most talented Croatian musicians of the younger generation. She is a laureate of many domestic and international competitions, which enabled her to perform at prestigious music festivals across Europe, where she gave a number of successful solo recitals praised both by the critics and audiences. She has appeared as soloist with all major Croatian orchestras and ensembles: the Zagreb Philharmonic Orchestra, Croatian Chamber Orchestra, Croatian Radio and Television Symphony Orchestra, Dubrovnik Symphony Orchestra, Zagreb Soloists, Zagreb Quartet, Cantus Ensemble, 4Syrinx Flute Quartet, Porin String Quartet and others. In recent years, she has become a renowned chamber musician and has collaborated with the foremost Croatian and international soloists. She started her musical education at the age of five in Zagreb, where she graduated from high school and finished secondary music school under Professor Blanka Podreka. After completing a degree in Piano Performance at the Zagreb Academy of Music under Professor Damir Sekošan, she completed Master’s degree under Professor Vladimir Krpan and continued her education in Italy with Professor Franco Scala. She won the University of Zagreb Rector’s Award, the Ferdo Livadić Award, the Darko Lukić Award and first prizes in international competitions in Moncalieri and San Bartolomeo. She recorded for the Croatian Radio and Croatia Records and appeared in Croatian Television’s music programmes on several occasions. She has served as Artistic Associate at the Zagreb Academy of Music since 2007.

Dalibor Cikojević started his musical education in Split, where he graduated from high school and finished secondary music school under Professor Jelka Bakašun. He studied and earned his Master’s degree at the Vienna University of Music and Performing Arts under Alexander Jenner. Working with Oleg Maisenberg and studying Instrumental Pedagogy under Carmen Graf Adnet further contributed to his artistic development. He has regularly performed in Croatia and abroad and, in addition to his successful solo recitals and appearances with orchestras, he is especially noted for his interpretations of works by Croatian composers Boris Papandopulo and Božidar Kunc. His five CDs with premiere recordings of their most renowned pieces bear witness to that, as well as the Milka Trnina Award from the Croatian Association of Music Artists for Outstanding Artistic Achievement and the Porin Music Award for Best Classical Music Album. Dalibor Cikojević worked as a music pedagogue in Austria for years, at the Vienna University of Music and elsewhere. He is a Full Professor with tenure at the Academy of Music, University of Zagreb, where he served as Associate Dean for International Cooperation from 2007 to 2013 and as Dean from 2013 to 2019.