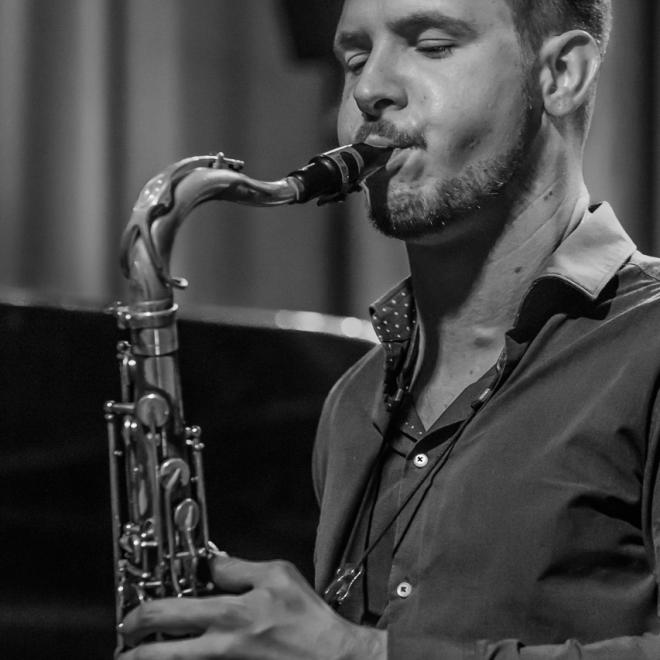 Ivan Bonačić, saxophone player and composer, was born in Dubrovnik in 1988. His first exposure to music studies was through an elementary music school clarinet program in the Art School ‘Luka Sorkočević’ in Dubrovnik, in which he continued his high school studies. At that point he transferred to a saxophone program, studying with Professor Eduard Marčić. In terms of performance experience, he started performing for various audiences at the age of twelve, and was engaged in various projects for the famous Dubrovnik Summer Festival early on, performing in theater plays ‘Columbus’, ‘The Visit of the Old Lady’ and ‘Grižula’ as a stage musician.

After high school Ivan continued his music studies in Graz, at the University of Music and Performing Arts Graz with Professor Karlheinz Miklin. He graduated in 2014. During his university studies, as a part of curriculum, in Austria, he collaborated and performed with many world-renowned musicians, like Carla Bley, Steve Swallow, Ed Neumeister, Louis Diego Bonilla, Don Menza, Michael Abene and many more..

During that time and in the following years, he also collaborated with various Croatian musicians and ensembles, like Teo Martinović, Valetudo, B’s Funstallation, Miro Kadoić, Otpisanimator, F5, Mario Rašić Balkan Zoo Ensemble, Valerija Nikolovska, Viktor Lipić… As a soloist he had multiple collaborations with HRT Jazz orchestra as well as Dubrovnik Symphony Orchestra and many more musicians on the Croatian jazz scene. In 2019 receives Status prize from HGU (Hrvatska glazbena unija - Croatian Music Union) in category of Jazz saxophone.

He published his debut album "Kraken" in 2017, Geenger records, a collection of his own compositions.

He plays tenor and soprano saxophone and flute as well. Lately, he has been performing with guitarist Filip Gavranović, as well as his own quartet. Currently, he is composing a second album of original music