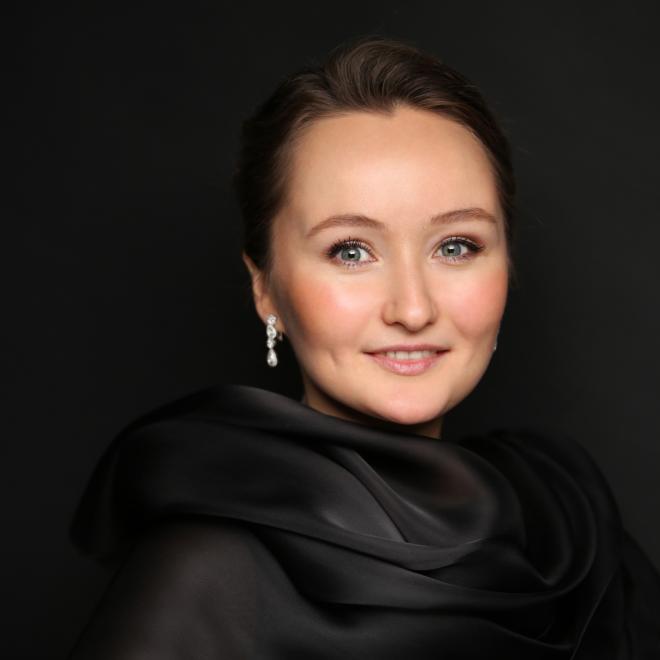 Julia Lezhneva is one of the leading artists of her generation. The young Russian soprano with the voice of ”angelic beauty” (The New York Times), “pure tone” (Opernwelt) & “flawless technique” (Guardian) brings “unforgettable spiritual expression” & “perfect artistry” (Guardian) performing worldwide. Her international career skyrocketed when she created a sensation at the Classical Brit Awards at London’s Royal Albert Hall in 2010, singing Rossini’s Fra il padre at the invitation of Dame Kiri Te Kanawa.

Born in December 1989 in a family of geophysicists on Sakhalin Island, she began playing piano and singing at the age of five. She graduated from the Gretchaninov Music School and continued her vocal and piano studies at the Moscow Conservatory Academic Music College... At 17 she came to int attention winning the 6th Elena Obraztsova Opera Singers Competition 2007, and next year shared the concert stage with Juan Diego Flórez at the opening of the Rossini Opera Festival in Pesaro. In 2008 she began studying with tenor Dennis O’Neill in Cardiff, completing her training under Yvonne Kenny at London’s Guildhall School. She has attended masterclasses with Elena Obraztsova, Alberto Zedda, Richard Bonynge and Thomas Quasthoff. In 2009 she won first prize at the Mirjam Helin International Singing Competition in Helsinki and the following year took first prize at the Paris International Opera Competition, the youngest entrant in each competition’s history.

Opernwelt named her “Young Singer of the Year” in 2011 for her debut at La Monnaie in Brussels. The following year she performed at the Victoires de la Musique Classique in Paris and appeared at the Salzburg Festival in Handel’s Tamerlano opposite Plácido Domingo and Bejun Mehta.

Her debut in Handel’s Alcina as Morgana at the Staatsoper Hamburg was widely celebrated in September 2018; on the spot, she was invited to return for Il Barbiere di Siviglia (Rossini) and the re-opening of Alcina. Concert versions of other operas will be held throughout 2019 and 2020 in Moscow, Vienna, Salzburg, Paris, and Basel: Porpoa – Germanico in Germania & Polifemo, Handel – Rodrigo & Alessandro, Vivaldi – Orlando furioso.

She is a guest to many festivals in Europe: the Lucerne Festival, Rheingau Musik Festival, Schleswig-Holstein Musik Festival to name a few. The year 2019 sees her as an “artist in residence” at the Kissinger Sommer.

In the upcoming season 2019/2020, she will give her debuts with the Berlin Philharmonic and Adam Fischer in October 2019 and with the Musikverein Wien in February 2020.

Julia Lezhneva is an exclusive Decca artist. April 2017 marks the release of Graun Arias – her latest solo-album with concerto Köln. She won her an OPUS Klassik 2018. Her latest releases are Vivaldi Gloria with Franco Fagioli and Diego Fasolis (2018), Porpora’s Germanico in Germania with Max Emanuel Cencic (2018), Händel Arias with Il Giardino Armonico (2015) and her much-acclaimed solo-debut Alleluia again with Il Giardino Armonico (2014).