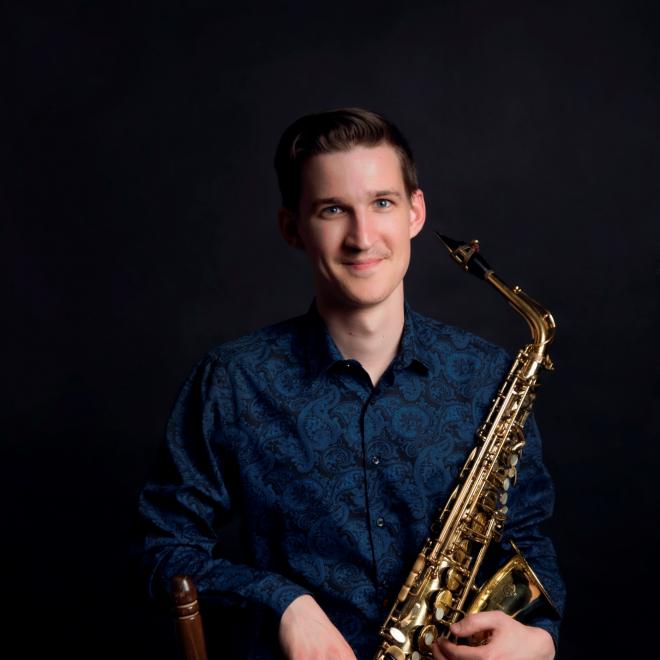 Lovro Merčep (1990, Zagreb, Croatia) graduated saxophone from the Academy of Music in Zagreb, and Conservatories in Amsterdam, Lyon and Versailles.

For his accomplishments during the studies in Zagreb he was awarded with The Rector´s prize and The Dean´s prize of the University of Zagreb.

Lovro pays special attention to the promotion of music by Croatian composers. In 2016 he recorded Sinfonietta for alto saxophone, strings and percussions by Bruno Bjelinski with Croatian Radio television Symphony Orchestra under the baton of the composers son Alan Bjelinski. On the 66th Dubrovnik Summer Festival he gave a premier of Concerto for saxophone and string orchestra by Ivan Končić, while on the 30th Music Biennal Zagreb he premiered Concerto for alto saxophone and strings by Davorin Kempf. Composers Gordan Tudor, Sara Glojnarić and Ana Horvat also dedicated their pieces to him.

As a member of Ardemus Quartet he played concerts in Europe and Asia in halls such as Royal Concertgebouw and Muziekgebouw in Amsterdam, Vatroslav Lisinski in Zagreb, Konzerthaus in Berlin, BOZAR in Brussels, Izumi Hall in Osaka (Japan) and Yangzhou Concert Hall (China). Ardemus Quartet is a winner of the 13th International Competition for Young Musicians Ferdo Livadić in Samobor (Croatia) and audience prize on Grachtenfestival Conservatorium Concour in 2016. As one of the four finalists of Dutch Classical Talent Tour & Award competition for the season 2018/2019, Ardemus Quartet had an opportunity to play a tour throughout The Netherlands and was promoted on the Dutch television and radio program.

Lovro is a teacher at the Music school Elly Bašić in Zagreb, and is teaching on Youngmasters International Young Musicians Summer Class in his hometown Samobor. He has given masterclasses through out Croatia and in Spain.

He is an exclusive D'Addario Woodwinds artist.